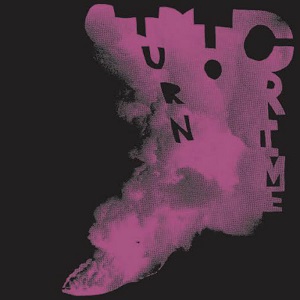 I could write what I know about Turn To Crime on the back of a postage stamp. It would be a First Class one though.

Formerly of Awesome Color, Derek Stanton fronts an experimental trio with seven (if you count the fifty-six second opener I) tracks of raw jams which are crushing and contagious. The title track has superb muffled percussion which repeats from start to end, with equally gagged vocals it could just become one of those tracks that you have on permanent repeat.

Equally, the stomp beat of Sunday’s Cool could almost have come from the repertoire of The Clash with a vocal style not totally unlike Mr Strummer. It bounds along with a smug swagger and every confidence you’d expect from a band that have a dozen album under their belt.

But the album isn’t all fuzzed-out guitars and loud drums as Pine Box demonstrates. Bringing proceedings down to Earth with a pithy bump it scuttles along quite nicely thank you very much, and shows a tender side that may not at first be evident from the openers. Forgiveness brings back a forceful percussion, almost native American, almost Dylan-esque, lamented voice and succinct keyboards.

Nightmares sees Turn To Crime turning more experimental with guitars which screech and meander through a distorted forest with echoed effects and vocals. It generates a semi-frightening backdrop and is interesting listening indeed.

Ending with I Can’t Not Love, an extended instrumental of the title track with less percussion and heavier base, sounding like an early New Order making the transition from Joy Division. At over ten and a half minutes long it becomes slightly pretentious and maybe experimental for experimental sake, but does give further credence to the band and their addictive style.