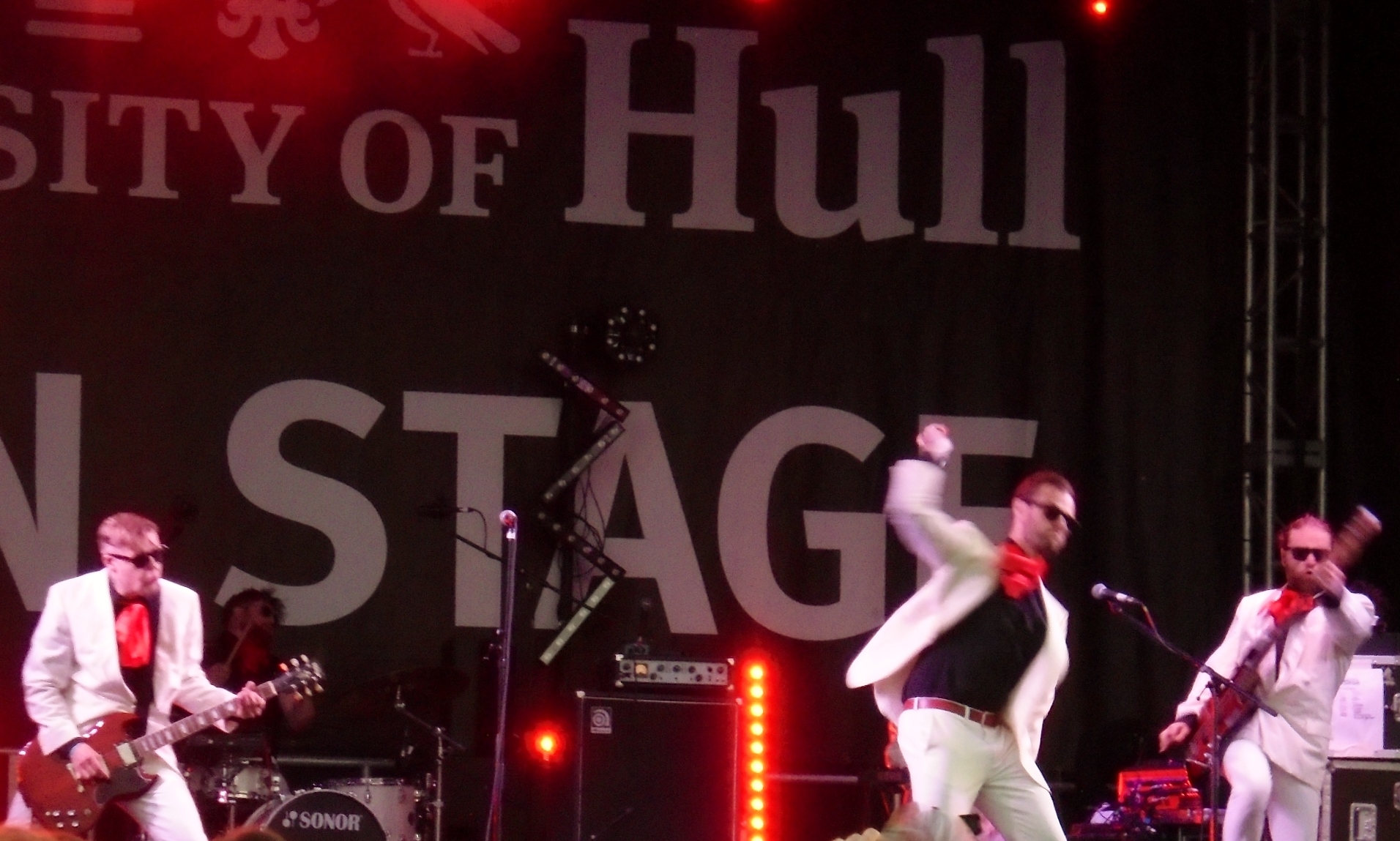 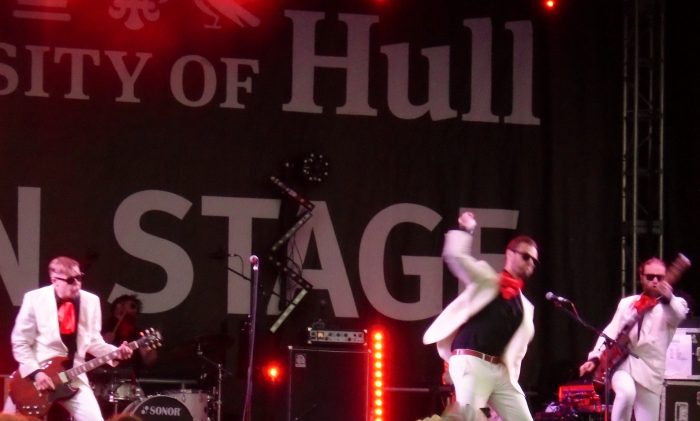 Originally intended to celebrate the success of a Tuesday night event in a Hull pub the Humber Street Sesh has grown in five years to over 200 bands playing to more than 30,000 people in one day. When someone tells you the music scene was “better in my day” it probably tells you more about them. In Hull and the surrounding area the grassroots are riotous and self-determined like never before.

So in no particular order Fire (The Unstoppable Force) who were the undoubted winners of the costume design prize. Now it would have made my job easier if Humberside Fire and Rescue had sponsored the Main Stage rather than the Silent Disco but it was good to see a band who sometimes seem to get overlooked up on a big stage. Particularly as their white suits and charismatic front man Alfie Steel were more than capable of filling the space. With his Persil advert Nick Cave performance entailing much dropping to his knees on old favourites such as “Rat Bomb!” and “Psycho Killer” I was relieved the rain had kept off for them.

The upping of their game on recent single “Whiplash Crocodile” was spawned in the Warren Youth Project and released on their label to go alongside other bands from Hull’s vibrant current scene. Back in the last century I did a short stint at the Warren and can vouch for it’s sometimes painstaking commitment to giving everyone involved a say but it is probably this sort of empowerment which has gone on to make it such a creative hub in the area.

I also wouldn’t have imagined the much under rated Eighties Matchbox B-Line Disaster would prove so influential but there is another band who have channelled their spirit at the Warren in Cannibal Animal. Meanwhile Lumer’s imminent EP twists British post punk with the mid-eighties American underground while Lincoln’s Serial Chiller ventured over the Humber to record their independent take a million miles from the likes of Coldplay pissing yellow over its original meaning. 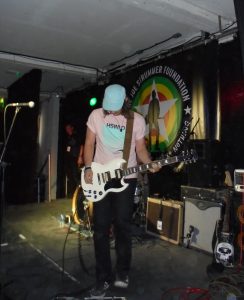 As suggested by Serial Chiller bands from outside the area but who have some sort of an affinity with the place were playing and one of the best were And The Hangnails from York. Starting with the two minutes of tune that is “You & I” they immediately tapped into my inner Beavis and Butthead rock smirk which barely let go. Maybe their lyrics deserve a more considered response as the imagination necessary to challenge the supposed limitations of the two-piece guitar and drums set up is present and correct.

The band before them on the joint Warren and Strummerville Stage definitely had something they wanted to get off their chests. Uncle Joe would have been proud as Burton’s Thee Deadtime Philharmonic vocalist Murdoch fumed in the heat of the room and their Tempest meets ska in a Redskins kind of way proved a good vehicle for it. Name checking Bransholme the massive council estate in Hull prior to “Bad Lad” prompted a cheer before the song with a video featuring fan and actor Michael Socha from “This Is England” earned a suitably warm response.

Coming at the social realism from a more oblique angle works better for me than banging on about Thatcher as events like today show people can rise above the victimhood the evil witch or any politician tries to impose. As thousands of people move good humouredly around pavements cordoned off for Hull’s City of Culture Year in 2017 perhaps you don’t need a leader at all. If you do we are spoilt for choice by contemporary targets and with the vocal prowess of Kerry Ann providing a melodic counterpoint to Murdoch Thee Deadtime Philharmonic have the armoury to take them on. 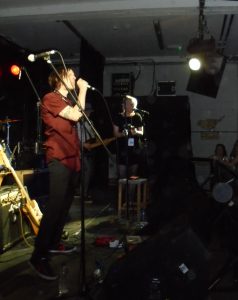 Come the actual witching hour an alarming beer shortage was handled with great magnanimity as it seemed to be a result of the splendid day being a victim of its own success. Such was the line-up I only got to whoop enough at the Ming City Rockers and return of star bassist Jakk to know they stole the show before heading to the BBC Introducing Stage.

Now it’s a fact that that 83% of bands get worse. Last up are Hull band Life intent on joining the cohort who don’t descend into mature string section hell. While not the tit from “The Voice” the production of someone from the Kaiser Chiefs may have coloured my perception but their early stuff was a little generic “indie” to me. More recently with songs such as “Go Go Go” and “Rare Boots” they seem to have honed the more commercial Fall sound I seem to remember from their previous incarnation as The Neat and taken it on a level.

Their set and the day climaxed with vocalist Mez in amongst a crowd who seem to be increasing in size as their northern sensibility gets more skewed. A “DIY or Die” ethos means bands like this will carry on regardless but as Life put it in their insistent way: “Totally off my face I listen to popular music.” You and me both Humber Street Sesh. 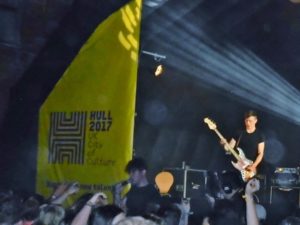