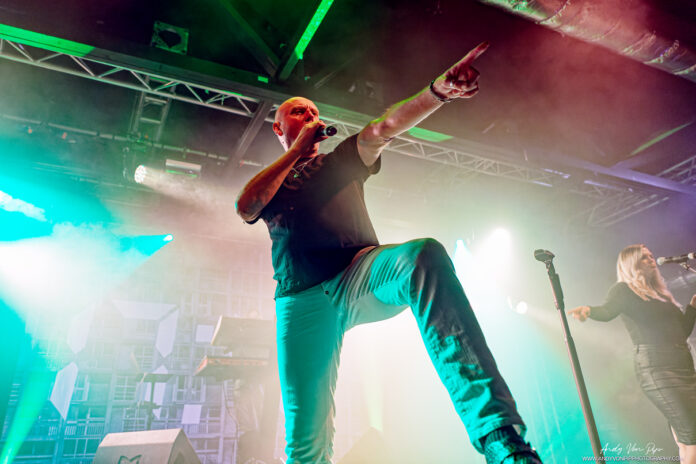 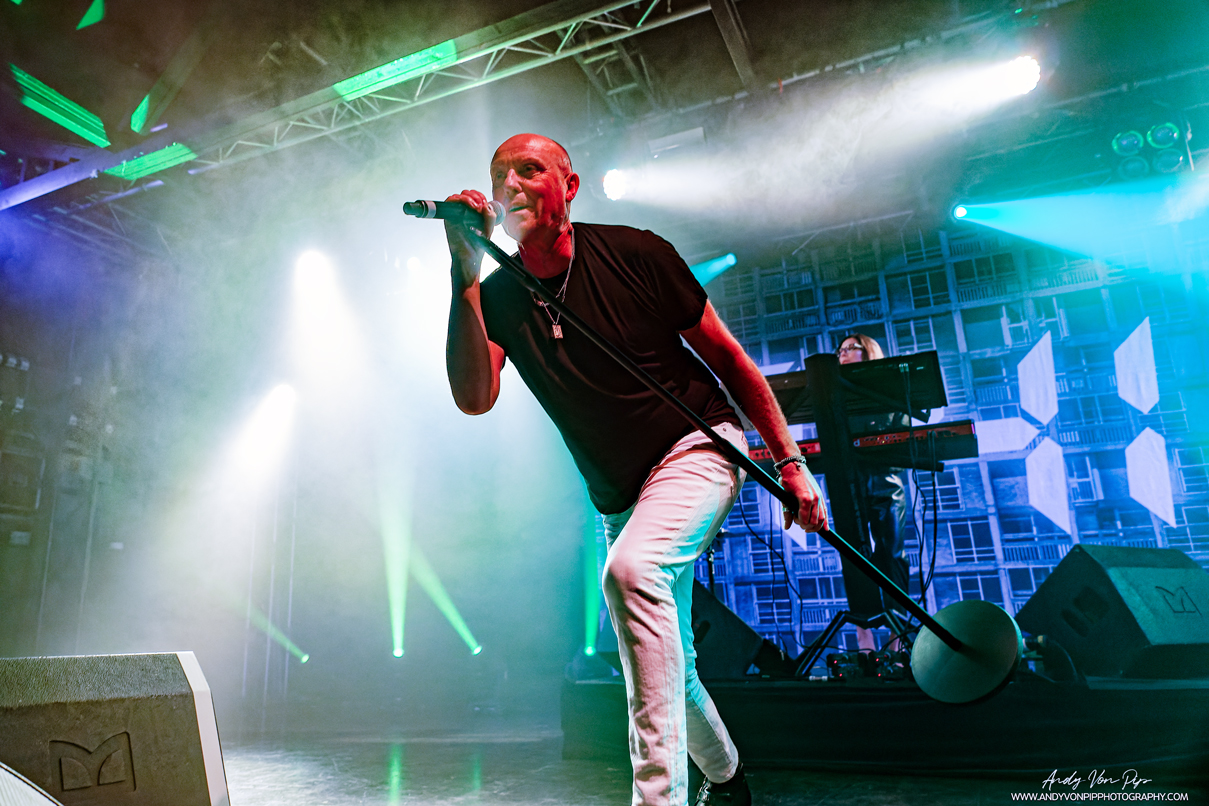 Heaven 17 are one of the few bands from the ’80s who can still command sizeable crowds without just relying on playing the nostalgia festival circuit, as tonight’s sold out gig at Liverpool’s O2 Academy shows. They seem to be in a select few in this regard; their friends/rivals Human League can still do it of course, but others seem to struggle. Soft Cell do it by only reforming and playing infrequently, ABC can only do it when they play Lexicon Of Love, and countless others only seem to turn up at the likes of the Rewind Festivals.

On tonight’s showing, there would appear to be two reasons for this. One is the fact that they have a back catalogue absolutely rammed with irresistible dancefloor classics. The other reason is the sheer force of their personalities. Glenn Gregory is a warm, funny and entertaining frontman who cannot stop his personality pouring from the stage in everything he does, and it is a pleasure to be in his company.

Support tonight comes from local legend Pete Wylie, who I unfortunately miss for logistical reasons, and by ‘logistical’ I mean I didn’t know he was playing and was sat in the pub. Those of you who are fans of the great man can take comfort in the fact that I am already kicking myself for this and will continue to do so for some time. 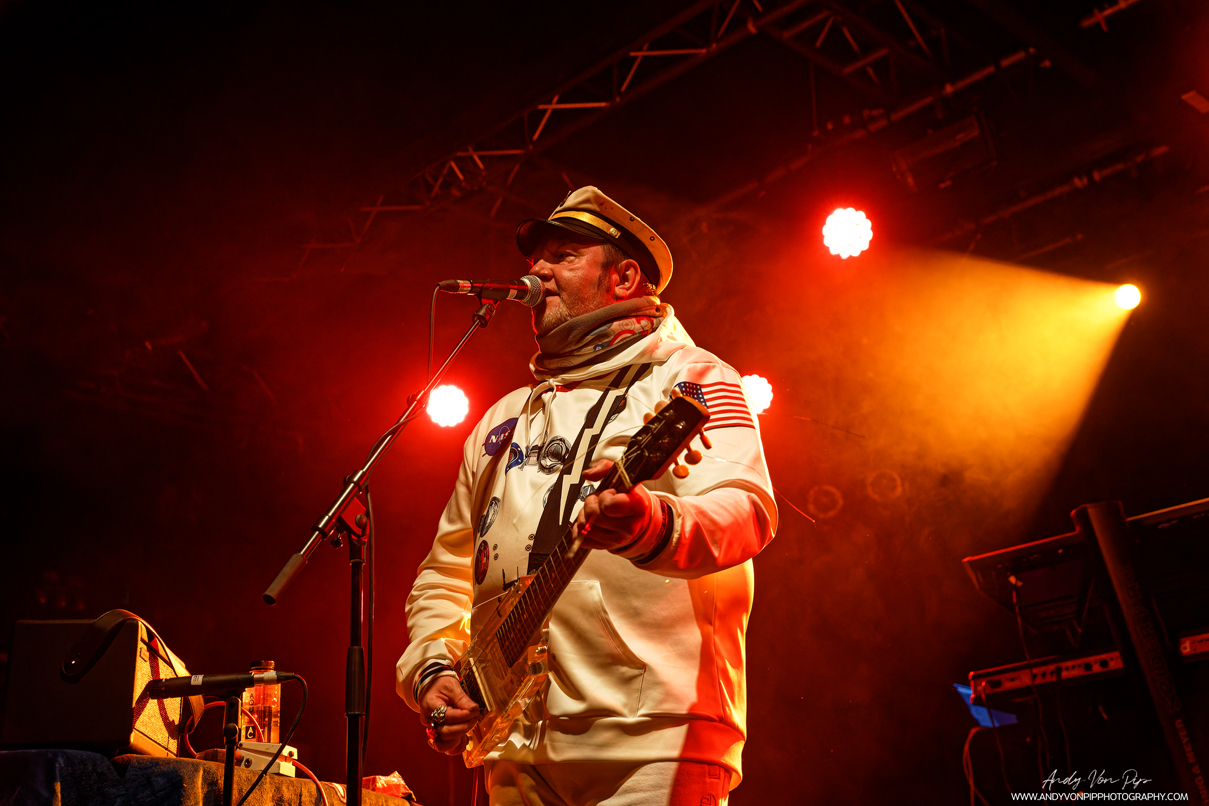 Heaven 17’s current tour was originally intended to be a celebration of their 40th anniversary, but due to last year’s restrictions is instead taking place as their 41st. An anniversary tour means that we are treated to a best of set for most of the night. First track At The Height Of The Fighting starts things off at a good pace. Mainstay members Gregory and Martyn Ware are backed up by keyboard player Flo Sabeva and two superb singers (called, I think, Kelly and Hayley) who share the stage and the limelight with Gregory.

The songs have been updated, with the trebly ’80s sounds replaced by a fuller, more modern sound, but for the most part, they still retain their ’80s stylings and remain firmly in the synth-pop genre. Where Blancmange have constantly revised and reworked their old songs, Heaven 17 seem happy with what they have.

(We Don’t Need This) Fascist Groove Thang comes next and still sounds out of place in Heaven 17’s cannon. It remains a classic of its age though and suits its new beefed up sound. Crushed By The Wheels of Industry allows the two backing singers to really shine. In fact, backing singers is not the correct term here at all, as they are often the stars of the show, leaving their slot at the side of the stage and roaming around like they were born to it. They are an essential part of Heaven 17 and the band would not be able to function without them. 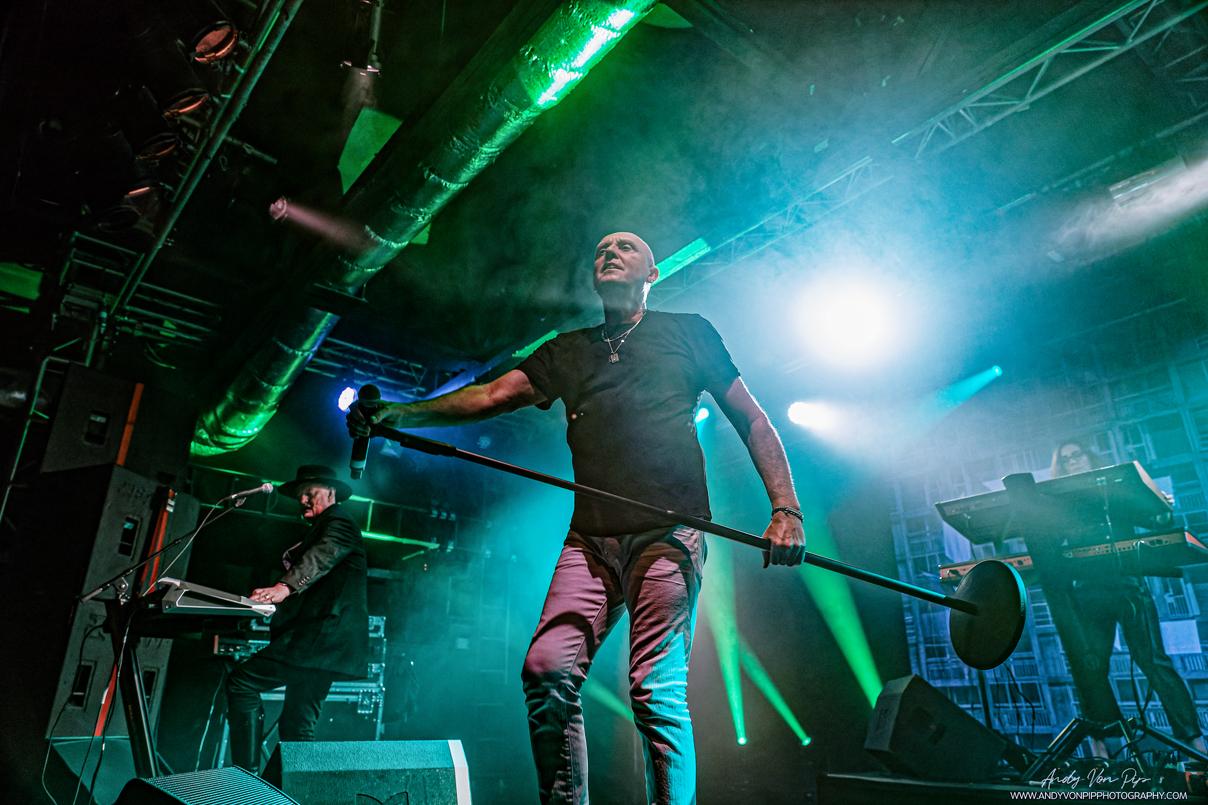 Come Live With Me has always been a favourite song of mine and, judging by the cheers that greet it, many people feel the same. Most of the audience seem to be ‘of an age’ and will have grown up listening to these songs and they make their appreciation well known. Liverpool and Heaven 17 love each other, there is no doubt about that.

The first non-Heaven 17 song of the night is their version of Human League’s cover of You’ve Lost That Lovin’ Feeling, which appeared on the League’s debut album, Reproduction. At the time it was a strange song that introduced the notion that electronic music could still be jam packed full of emotion, a revolutionary idea at the time. For tonight’s performance, Martyn Ware leaves his keyboard and takes centre stage with Glenn Gregory and the two trade harmonies. This creates quite a paradox to watch as it is an old fashioned presentation of what was once a futuristic song, even if it was written in the ’50s.

Gregory introduces We Live So Fast by telling us it was written when they were taking speed and before they thought about playing live, meaning that it contains “two thousand words that I now have to sing.” An onstage discussion takes place between Gregory and Marsh about what drugs they took at the time before they realise they were having this discussion onstage in front of 1200 people, such is their ease on stage. 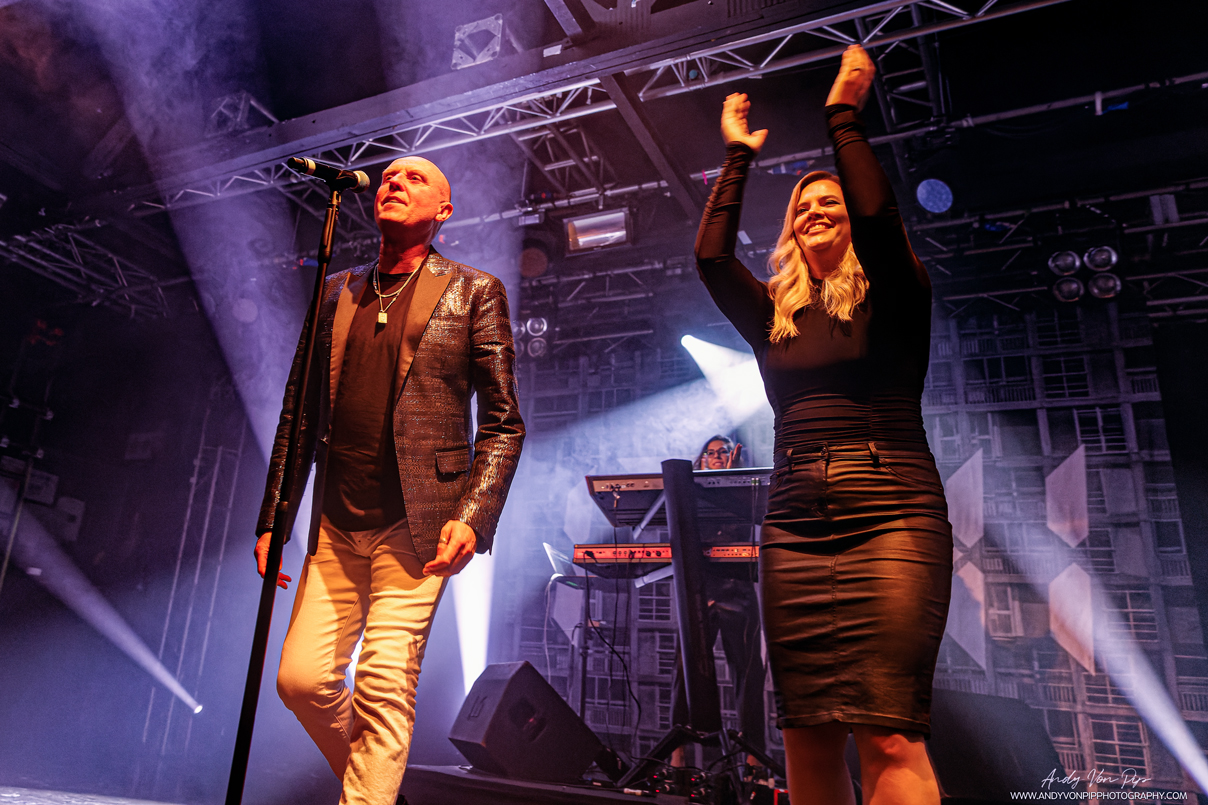 Temptation closes the set of course, but it is a reworked version, similar to the Brothers In Rhythm remix, that builds and builds and features some spectacular vocals from Kelly Barnes. The enthusiasm of the audience is matched by that of the band and it all sounds genuinely joyous.

The applause that greets this is so great that the whole band seem taken aback as they line up to take a bow. It does not stop as they walk off stage, so Gregory soon returns with Sabeva for an encore. The Associates’ Party Fears Two is the first of three cover versions that make up this encore and before it begins, Gregory tells a touching tale about singer Billy Mackenzie giving him a whippet puppy.

Understandably taken by surprise at this, Gregory tried to hand it back saying that he couldn’t take a dog off him just like that, before telling us that of course he kept the whippet and it lived with him until it was 18 years old. He went on to say that he has now had whippets for over 40 years, including one called Billy. The following version of Party Fears Two is stripped back to keyboards and voice and showcases what a wonderful song it is, and what a talent Mackenzie was. 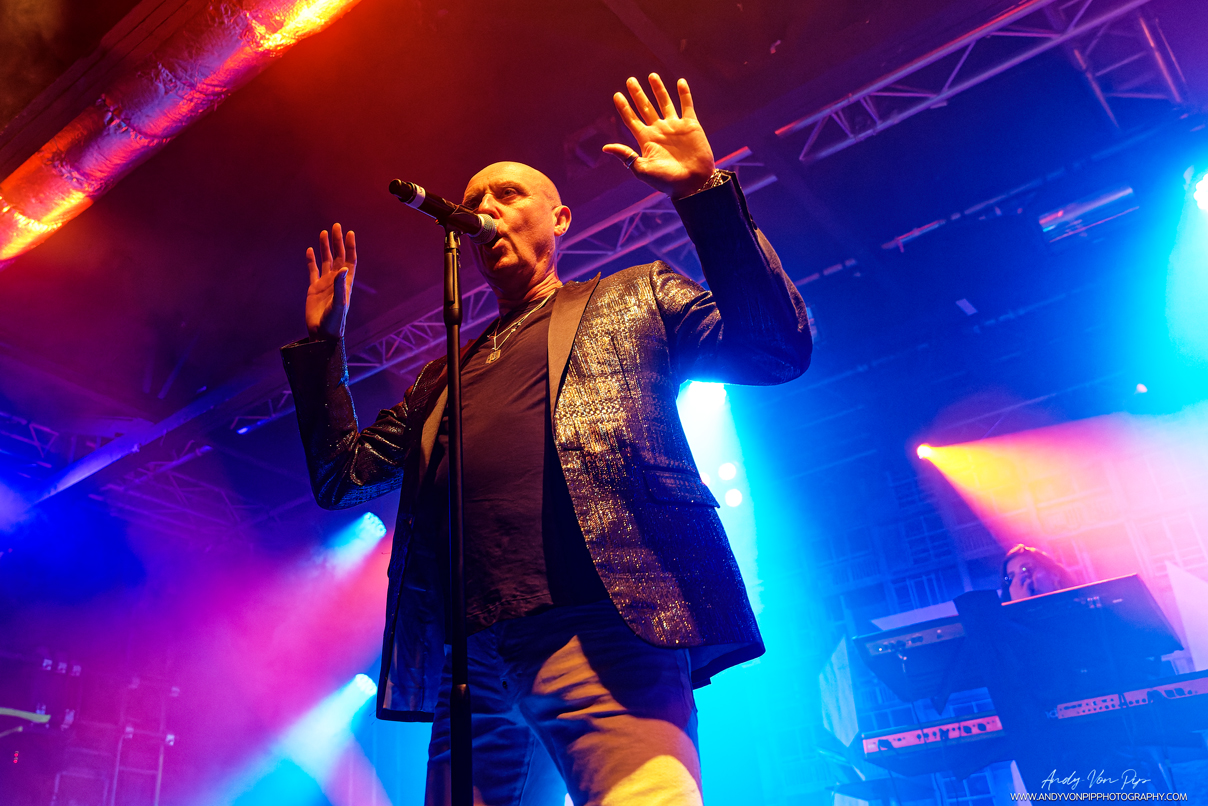 David Bowie’s Let’s Dance is next and this may seem an odd song to include until we take into account that Gregory is the singer in Holy Holy, where he performs Bowie’s back catalogue with ex-Spider from Mars and producer Tony Visconti.

All through the show, a small keyboard has sat unused at the side of the stage. This it turns out is the original synth that Ware wrote Being Boiled on back in the ’70s and he uses it to perform the song live tonight. For any synth geeks in the audience, this is a huge treat. When Louder Than War last spoke to Ware about it he told us it “sounds completely different to contemporary synths, it’s not just a geek thing, they’re built from different components, it’s like a Rolls Royce versus a fucking Skoda” and the sound it makes is indeed different from what we have heard so far (click here to read the interview in full). Being Boiled still sounds futuristic all these years on, which shows how far ahead of the curve Martyn Ware was.

The band once again line up to take their bows and the audience again roar their approval. Heaven 17 will always have a place on the nation’s stages and in their hearts. They are too good not to.

Words by Banjo, you can find his Author profile here

Photos by Andy Von Pip. You can find him on Facebook and Twitter. Photography portfolio can be found here: