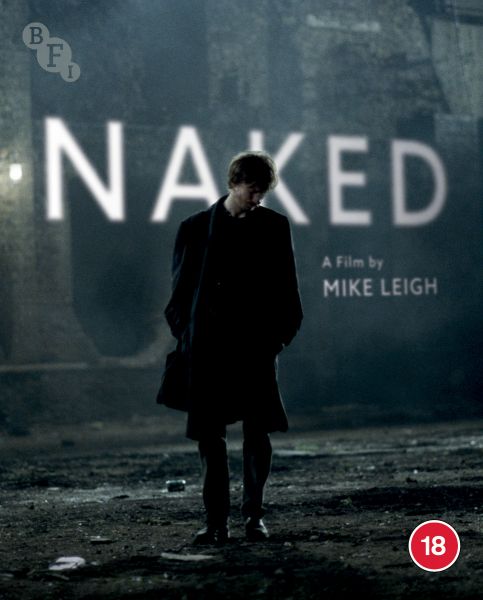 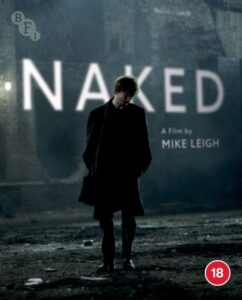 Jamie Havlin delivers his verdict on one of Britain’s cultiest films of the 1990s.

There have been many fine performances in Mike Leigh films over the years; Imelda Staunton in Vera Drake and Timothy Spall in Mr. Turner for starters. I’ll even happily admit that James Corden was pretty damn good in All or Nothing. But best of all is David Thewlis as the in-yer-face Johnny in Naked.

And we’re off! A handheld camera hurtles towards Johnny and a woman in a dark Manchester backstreet. They might have started out having rough but consensual sex, but she begins to resist and now clearly wants him to stop. He doesn’t. Once he’s finished with her, she issues him with a threat that scares him enough to make him want to get out of town ASAP. He grabs a duffel bag from his flat, steals a car and heads southwards to London.

There, he seeks out Louise, an ex from his home town played by Lesley Sharp, and is invited in by her flatmate Sophie (Katrin Cartlidge), a ‘wicky wacky’ Goth who likes sex and getting stoned. She fancies him and he dazzles her with his verbal flights of fancy. She reckons this geezer is a genius.

‘Have you ever thought, right, I mean you don’t know, but you might already have had the happiest moment in your whole fucking life and all you have to look forward to is sickness and purgatory?’

It’s a strange chat up line of sorts, but that’s Johnny for you. He’s equally repulsive and fascinating. He talks and talks. Or rants and rants, jabbering rapid-fire nihilistic ideas about the state of the world, the Bible and conspiracy theories. He gives a fantastically funny condensed explanation of the Big Bang Theory and his personal take on chaos theory: ‘Every time a butterfly flaps its wings in Tokyo, this old granny in Salford gets a bilious attack.’ 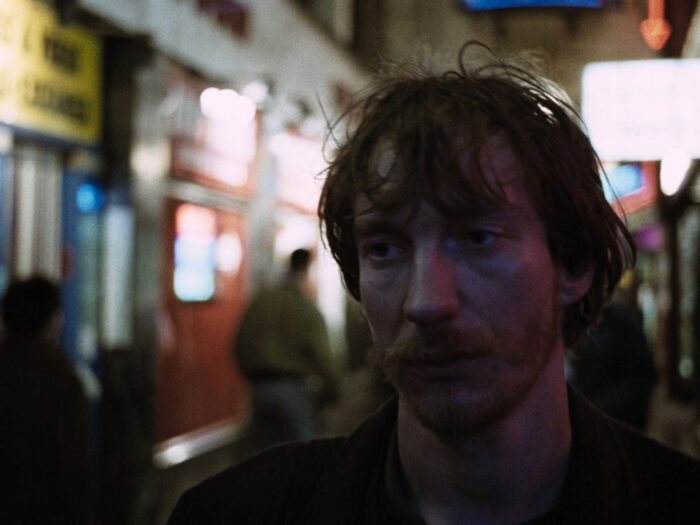 In his waking hours, the only thing that ever shuts him up is when he reads and fortunately, he does like to read. Johnny’s an auto-didact, razor sharp but from a generation where clever working-class teenagers weren’t always encouraged to go to university – his fellow Mancs Morrissey and Mark E. Smith spring to mind here. Come to think of it, Johnny’s nasal twang and some of his scalding wit do remind me of the much missed Mark E.

Since putting his schooldays behind him, Johnny’s only known Conservative rule. It’s 1993 and the countdown to 2000 has started with millennial anxiety on the rise – anybody else remember the Y2K scare? Homelessness is rife on the streets of Britain’s big cities, and unemployment is hovering around the 3 million mark with economists predicting it might soon rise by another half a million.

Not that you could imagine Johnny expectantly sending off a flurry of CVs or visiting any job centre unless to sign on. He seethes just mentioning the word work to Louise when she gets back from her secretarial job. She isn’t overjoyed to see him and who could blame her. Life is seldom sweet when Johnny’s around. He’s scathing about a postcard she sent him and belittles her at every single opportunity. Inevitably, she asks the question that we all would like to know the answer to: ‘Why are you such a bastard, Johnny?’
Being a Mike Leigh film, it’s best not to get your hopes up on ever finding out the answer to that one although there are hints.

That night he sleeps with Sophie, but this relationship is never destined to blossom into one of the great screen romances. Sophie is apathetic and tends to dismiss any complex ideas as ‘a load of bollocks.’ Soon she only irritates him. The following day he plays her and Louise off against each other before taking off on an odyssey around the nocturnal streets of the metropolis. 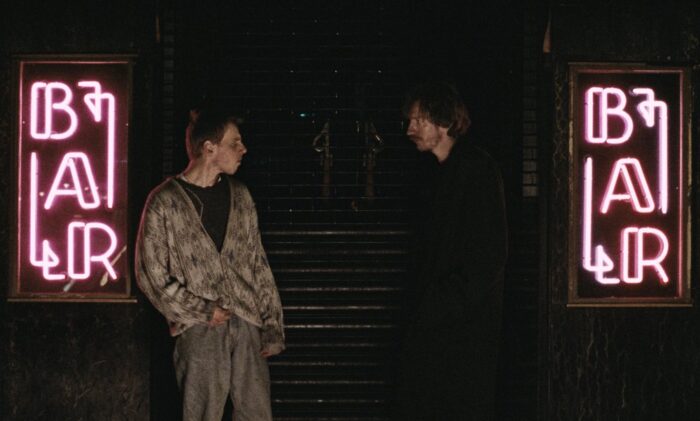 He meets a homeless and aggressive young man from Edinburgh called Archie, who speaks (or shouts might be a more accurate description) with an accent that Johnny finds almost impenetrable although not as impenetrable as Archie finds his spiel about self-fulfilling prophecies and Nostradamus.

‘You’ve got a lovely way about you,’ he tells Archie the younger man, and you could mock Johnny with the same quip. Likewise, when he asks Archie, ‘What’s it like being you?’, you might wonder the same of Johnny.

Perhaps surprisingly, he does later manage to scrape up some pity for Archie’s girlfriend Maggie’s plight and even buys her some food. Ironically, she unintentionally supplies one of the cruellest moments in the film when he she guesses his age as forty and doesn’t remotely believe him when he reveals he’s twenty-seven.

Sitting outside the entrance of an empty office block, he’s invited in by security guard Brian (Peter Wight), who has ‘the most tedious fucking job in England,’ but maybe intrigues Johnny as he is also a reader – we glimpse a copy of a Colin Wilson book on his desk along with some others. The pair engage in some philosophical debate.

Suddenly with Naked, a Mike Leigh film looked cinematic. There’s a long two-shot with the pair silhouetted against windows lit from the outside in fluorescent light where Johnny lectures Brian on the significance of barcodes, Chernobyl, the apocalypse and much, much more. Cinematographer Dick Pope employed the bleach bypass technique to achieve what he calls the film’s ‘post-punk look’ of grainy blacks and greys, and desaturated blues. It’s entirely appropriate colour palette.

‘Don’t waste your life,’ Brian advises Johnny the next morning. He has repeatedly proved he can talk but so far, he hasn’t demonstrated much of a talent for listening. His attentions then switch to an unnamed waitress played by Gina McKee, who is as laconic as he is verbose. He does display some tenderness towards her, but he’s already shown he can be oddly charming, albeit not for any extended length of time. His journey will continue and how it will end is hard to predict. 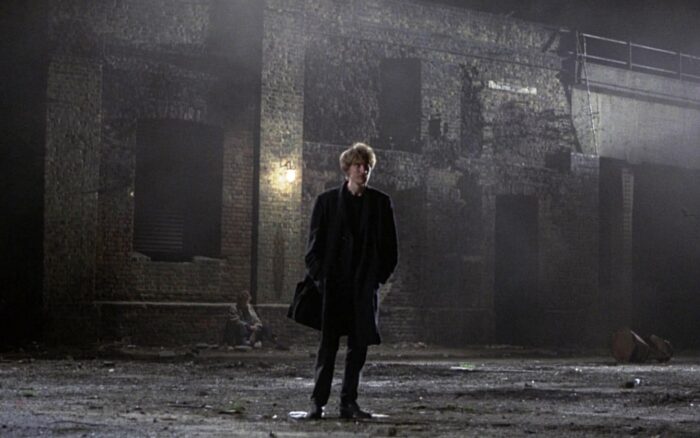 Parallel to Johnny’s story, we occasionally see another youngish man from a very different background. This is Jeremy (Greg Cruttwell), a supercilious and sadistic yuppy. While Johnny is three dimensional, Jeremy only stretches to the one dimension. No redeeming qualities. No character arc. Surely only there to make Johnny appear more palatable. He claims he’s going to kill himself once he turns 40. Few will mourn him if he sticks to his words.

Yes, Naked is flawed. It’s also a difficult watch in places – there’s one scene involving sexual violence in the second half of the film that is particularly brutal. Lesley Sharp is superb, Katrin Cartlidge is superb, while in their smaller roles David Wight and Gina McKee excel too. Naked belongs, though, to David Thewlis. Okay, I claimed earlier his performance here is the best of any in a Mike Leigh film. It’s also the best performance by any English actor in the 1990s while Naked is arguably the best English film of that decade.

Whatever happened next to Johnny? I’ve watched the film three times over the years, and I still can’t make up my mind.

For more on the release click here and if you’re interested in the first appearance on Blu-ray of Leigh’s debut feature Bleak Moments that will be released simultaneously with Naked, here’s another link for you.