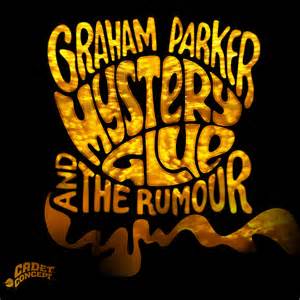 Punk rock did much for many; even today we see guys like Danny Baker, Robert Elms and Jonathan Ross across our televisions and other media. Many of the class of ’77 still thrive and rightly so. Weller, Costello, MacGowan and the rest are still out there doing it and think of them what you might, they were born out of punk and like many others, they’ve reaped the rewards ever since.

What’s not so often talked about are the casualties of punk. Pub rock (despite what Will Birch will tell you in his rather excellent book No Sleep Till Canvey Island) was decimated as surely as the “dinosaurs” of stadium rock and many up-and-comers were trampled in the stampede to sign whatever one-chord-wonders were currently NME-darlings. Ergo Graham Parker and The Rumour. Formed in 1975 and quickly gaining acclaim for their hard-nosed, edgy and literate rock, the tidal surge of da noo wave quickly made them old hat before they had time to establish their roots.

Beloved of Whispering Bob Harris and the older music press hacks, The Rumour’s clearly well-honed musical chops and erm, slightly flared trousers made them as unpalatable to the new guard as long hair and mutton-chop sideburns. This was the age of Stalinist revisionism; if it ain’t the new, it ain’t no good. Despite this, The Rumour were renowned for their fiery live show and some quite excellent early records. The “Pink Parker” EP and the mighty Hey Lord (Don’t Ask Me Questions) are rightly regarded as classics of any era and it’s a real shame that a guy who was clearly very influential on Springsteen, Costello, The Replacements and many others didn’t achieve the kudos he should have at the time.

Reforming a couple of years back, Parker and cohorts released Three Chords Good, an album (after a 30 year hiatus) that encapsulated much of what was great about their original sound; aggressive-meets-tender songwriting, caustic wordplay and the bands taut, whipsmart playing.

Written in his adopted New York hometown this new album, Mystery Glue, consolidates that last release and then some. Opening duo Transit Of Venus and Going There are classic Parker. He’s mellowed a bit (haven’t we all) but the winding lyrics and deceptively simple melodies are multi-layered. The Rumour are of course old hands at this; Parker himself says that he gives them the songs and they come out with “wildly disparate and alarmingly wrong” diversions before it all starts to make sense. Must be that Mystery Glue that holds it all together, I guess….

Slow News Day is as caustic as anything Parker wrote back in the seventies and My Life In Movieland positively drips with sarcasm. Diversifying into a quite quaint punk-folk drawl on Pub Crawl sees the old humour still intact. Rattling the album out in a quite astonishing six days in London’s RAK Studios, Mystery Glue is a barnstorming return to the fold.

Sounds once asked (as music rags were wont to do in those “grab a headline” days) if Parker was “The new Bob Dylan”. Well, he probably wouldn’t thank you for that these days. He seems quite content being  the old Graham Parker.