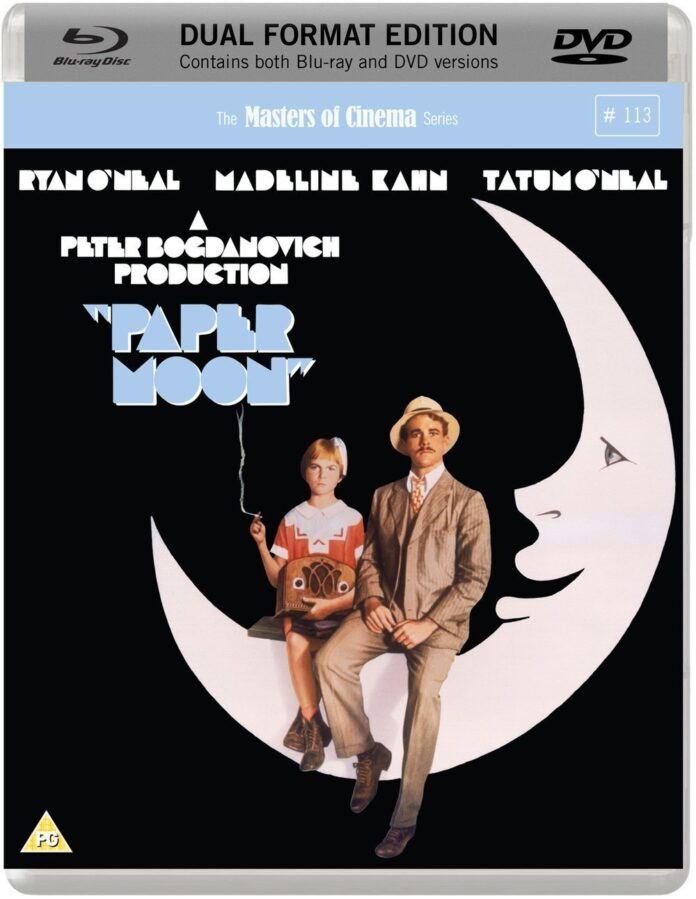 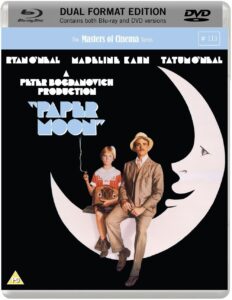 Paper Moon is the latest re-release by Eureka as part of their Masters of Cinema series but is this fondly remembered film really as good as its many fans claim it is? For Louder Than War, Jamie Havlin revews.

Today Peter Bogdanovich is best known to many as the guy who played Lorraine Bracco’s shrink in The Sopranos but in the early seventies, when he decided to shoot an adaptation of Joe David Brown’s Depression era novel Addie Pray – renamed as Paper Moon – he was a Hollywood A-list director and on a roll.

In 1971, The Last Picture Show received rave reviews and gained eight Academy Award nominations, while the following year, he scored a box office smash with his screwball comedy What’s Up, Doc?

Ryan O’Neal, the co-star of the latter film was cast as Moses (Moze) Pray, one of the two central roles in Paper Moon and his real life daughter Tatum, despite having never acted, was chosen to play nine year old orphan Addie Loggins, who as the film gets underway stands at the graveside of her mother as her funeral draws to a close.

The small gathering of mourners is joined by Moze, who arrives in a noisy jalopy and throws some stolen flowers into the grave. Moses is a low grade grifter with a certain rascally charm and perhaps a resemblance to the child, although when asked if he is her father, he’s keen to deny it. Despite some major reservations, he agrees to escort Addie to Missouri so she can go and stay with her aunt, as he is heading in that direction himself.

And so begins a road movie where you’re never sure if the pair will ever reach their destination. They’re certainly in no real hurry to do so, which is fine as this is a character driven rather than plot driven film and the two leads are both such fun to watch.

First stop on their (mis)adventures is a local grain mill, where Addie overhears Moze threatening the brother of the man who killed her mother in a car accident while drunk with a lawsuit. He accepts $200 to drop the matter.

And then we have a fantastically funny scene in a diner which consists mostly of the precocious and tomboyish Addie asking Moze if he is her father and demanding the two hundred bucks for herself and Moze repeatedly telling her to eat her Coney Island hotdog. He’s evasive as hell and she is one very persistent kid.

Is he her father? Well, that particular question is never answered although I’ve always believed he was, maybe influenced by the fact that he is in real life – and watching the movie nowadays it is a little painful to think of the complete disintegration of that real life relationship. Actually, if Moze isn’t her father then this is one weird movie if you think about it.

Addie soon discovers and enrols herself into his main scam, which consists of studying obituary pages and then doorstepping the widow of someone recently deceased and claiming their dead husband ordered a ‘deluxe’ edition of the Bible – on which he has already embossed the widow’s name himself – which they are now under no obligation to buy.

Of course, they usually do want to buy it.

Yes, this is highly unethical but Moze does have a good heart at times. After all he could have refused to help Addie in any way. And those bibles that he sells do appear to provide some comfort to the grieving women.

As for Addie, she might be happy to join in on the scam but she employs an almost Robin Hood approach, giving away a bible free to a poor looking woman with a gaggle of kids to feed while doubling the price to an obviously wealthy widow.

Interestingly, she soon proves herself more adept at swindling than Moze and her deviousness also helps engineer a split between Moze and his squeeze, Miss Trixie Delight, an exotic dancer and narcissistic chancer played superbly by Madeline Kahn, who he takes up with briefly around the midpoint of the film.

Paper Moon is a joy from beginning to the end and if has any faults then I’ve never noticed them. Okay, it’s not the funniest film ever made but it is maybe the most charming comedy I’ve seen and consistently amusing.

It’s also beautifully directed by Bogdanovich and with its crisp black and white cinematography it hasn’t seemed to age since the 1970s. The costumes and period detail are always fantastic but best of all is the acting, although Tatum O’Neal is the one whose performance you will remember long after the end credits have rolled. She absolutely steals the show.

Interestingly the director has spoken about how he would have to bribe her during certain scenes to get her to cooperate with promises of money or new shoes. Apparently she hated the filmmaking process and while I can see how a child really would be bored stupid at times due to the length of setups and number of takes sometimes required on set, I like to think that maybe she was drawing on her onscreen persona at times and practising a little scam on the director herself.

Tatum O’Neal, along with Madeline Kahn, received a Best Supporting Actress nomination at 1973’s Oscars and I have no idea why she failed to be included in the Best Actress category as she is seldom off the screen and Bogdanovich opens the movie with a close-up of her for a reason. Happily though she did win the award and is still the youngest actor ever to do so in any competing category.

Bogdanovich went on to make more great films such as Saint Jack and The Last Picture Show sequel, Texasville, but never anything quite as perfect as Paper Moon.

Extras include a feature-length commentary from Bogdanovich, three documentary featurettes on the making of the film that include some outtake footage and a 36 page booklet.

All words by Jamie Havlin. More writing by Jamie can be found at his Louder Than War author’s archive. You can also find Jamie on Twitter as @MalcontentsOnly .