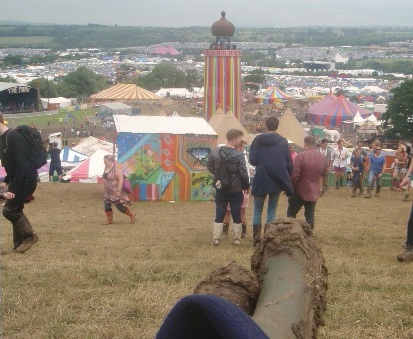 Keith Goldhanger has just spent the week camped next to The John Peel Stage at Glastonbury. Here’s what he thought. . .

Where else could we find ourselves eating a cheese and pickle sandwich we made ourselves, drinking wine from a plastic bottle we didn’t have to smuggle in, lighting a big fat one (firework) whilst sitting on our mate’s shoulders and watching the UK’s no 1 artist ADELE without anyone tutting disapprovingly or having security shine a little light on you because that kind of behaviour is not allowed?

Which other event manages to sell tickets with the holders’ photos on thus eradicating any website bumping up the price in order to make a quick profit for themselves and the person who has decided ‘doesn’t want to go anymore’? And where can we go where despite the elements everyone is happy to be there and wouldn’t wish to be anywhere else?

Add up the hours of rain we had over five days and you’d not get remotely close to double figures. Yes it was muddy, but this was an easy Glastonbury in terms of getting around.

Much worse over the thirty years that I’ve been going despite Michael Eavis being reported as saying it was the worst mud ever.

London may have had torrential rain on the Thursday morning, however those looking out their windows that day feeling fortunate that they failed to get tickets all seemed to forget that it didn’t necessarily mean it would also be thumping it down in Somerset.

The media, yet again were focussing on the mud, the puddles and the traffic jams that welcomed early arrivals.

This is also nothing new.

We’ve all been in traffic jams getting into the festival at some point. It happens every three or four years.

Glastonbury 2016 was nothing different.

Another year, another splendid line-up and another few days of dancing with strangers, helping out those in difficulty and generally trying to forget the world left behind back home. A world (or simply just a country) where at the time of writing isn’t a very nice place to live.

Adele headlining this was one of the best decisions made in 2016. A headline slot that should be by all means a one off: something special, not to be repeated.  So the addition of regulars MUSE (2004 and 2010) and COLDPLAY (2002, 2005 and 2011) was as disappointing as picking up a TV guide on Christmas Eve and realising The Great Escape would be on the telly again. Hindsight tells us that ELO could have headlined. New Order also, just to throw two names out there. This festival was bold enough to give the honour to The Kings of Leon and The White Stripes not too long ago.

Where has that boldness gone?

This was probably the saddest Glastonbury most of us can remember. As we woke up on Friday morning to the news that some of us were not even prepared for, a quick visit to the Leftfield tent to get a little clarification on what was happening in the outside world was enough to make sure we would dance until our feet dropped off and try to prepare for what the people of this country had just done to itself once we return home.

Inviting JAMES to open up on The Other Stage on Friday morning was a great decision too. New tunes mixed with old ones showed any doubters that this band are still on fire. Tim Booth drifting further into the crowd than anyone all weekend giving security a nightmare but punters an early thrill to the weekend.

BLOSSOMS on the same stage and RAT BOY over on the (‘Oh, we’ll just stick it away in the corner this year’) John Peel Stage were both swallowed up by the occasion. The former just plodding away offering very little we’d not heard before over the decades some of us have been attending this event and the latter seemingly more obsessed with seeing people dance than preventing his tunes from sounding like Jesus Jones B-sides. Standing in the Park watching everyone else’s favourite bands such as THE UNKNOWN MORTAL ORCHESTRA followed by EZRA FURMAN is always worth witnessing as were EXPLOSIONS IN THE SKY back in the Peel tent – a personal highlight of the weekend. It seemed apt that SAVAGES would end the day with ‘Fuckers’, a perfect song given the circumstances the day introduced us to. Only it wasn’t the end of the day at all really seeing as though UNDERWORLD were responsible for a large field losing their minds completely over at The West Holts Stage.

INHEAVEN on The William’s Green Stage (Saturday morning) gave us a hint that they’d be a thrilling act to go on to larger platforms in forthcoming years at this festival whilst we could easily wander off to see artists such as SQUEEZE and MADNESS play the tunes we never play at home but all know word for word. JAGWAR MA up at the Park were again doing their Stone Roses inspired tunes as good as the Manchester band ever did whilst JOHN GRANT played a croaky yet brilliant set warming us up for the big trawl back up the hill to catch MERCURY REV going through most of their album highlights from the past few decades.   A walk around The Other stage during New Order took long enough to catch half a dozen tunes before ADELE could be heard swearing as much as everyone else does when we’re at work ourselves whilst thrilling and containing such a huge crowd in the process.

MARSICANS who we’d met previously in Manchester last year played a blinder on the BBC Introducing Stage on Sunday morning. Here’s a band who we really do hope get the opportunity in years ahead to grace a larger stage and allow a few thousand more to sing along to the tunes we already have available. Another highlight of the weekend we hope will be repeated again sometime.

CASSETTE BOT/ DJ RUBBISH repeated most of last year’s audio and visual cut-up’s but the additional Referendum video clips climaxing into a ‘We didn’t know the result until we got here’ message meant it all came crashing down to a sudden but hilarious ending.

And then, at precisely the wrong time it rained a bit during THE ELECTRIC LIGHT ORCHESTRA who played all the tunes we hadn’t heard for forty years but still knew all the words to. ‘Roll over Beethoven’ was left until the end and still remains an utterly awful song since it’s the kind of tune you’d walk out of any pub that had a band inside it playing it. That aside, a great performance in the daylight that made us wonder how awesome this would be under their own lights at an evening show. Maybe one day we’ll find out.

BAND OF HORSES managed to plough through an hour’s worth of tunes we all love and were not put off by a huge crowd that included at least a couple of dozen people dressed as bananas.

Back at the main stage BECK reminded us that he’s managed to be responsible for a bucket load of tunes that he could throw at us from the dozen or so albums he’s released  and COLDPLAY were just as good as their previous visits despite the out of tune piano. Their tribute to Muhammed Ali and the collaboration with Barry Gibb to play a storming version of The Bee Gees ‘Stayin’ Alive’ would have been highlights of a long set but their tribute to Viola Beach had us in tears. It can be a cruel world out there and despite not knowing the band who all died earlier this year, there are many people around that did know them that we’ve been associated with here at Louder Than War. This band would have had parents, friends and family watching this and it’s beyond comprehension how this must have felt to them.

We left the site, not for the first time in our lives wondering if this may be the last time. Talk of relocation next year makes us fearful of the amount of people all walking around a new place not knowing where anything is or how long it may take to get there. Will the security or the Police give us the same laid-back professional care and attention that’s so important in making Glastonbury so relaxed and enjoyable? Some of us know Worthy farm inside out now and hosting the event elsewhere worries a few of us. Michael Eavis singing ‘My Way’ as we begin to think about going home may have been the swan song.

Glastonbury 2016 was as good as all the others. Sad, muddy, joyous and worth every penny and every torn muscle or blister.

We do understand that Worthy farm may need a rest every now and again though.

Even if we don’t.