Keith Goldhanger’s review of his second day in Manchester at The Carefully Planned Festival (part one here).

The morning (OK then, afternoon) after the night before when AK/DK had been asked if there was now a shortage of drummers in Brighton one or two of us are wondering if there’s an over-spill of out of work vocalists in the world at the present time.

ALRIGHT THE CAPTAIN are yet another instrumental band, a three piece playing more jerking odd timing numbers that have a crowd of fierce head nodding people standing in front of them. Back in the 90’s when some of us were visiting East German punk rock squats, bands like this were ten a penny but featured young men with drink problems who would fall around the stage going grrrrrr!! Dieeeeeee!! Boo the Police…. and murdeerrrr….!! before falling over again and drowning out anything pleasant that the other members of the ensemble may have been doing. Alright The Captain are not the first band this weekend to remind us of this and for this we come away thankful for not being subject to any shouty man in ripped jeans and Discharge T- Shirt.

It’s going to be a long day and most of the bands playing around The Northern Quarter today yet again may as well be the names of horses registering for the Grand National to….well one of us.

On entering GULLIVERS to see a one man Joy Division is welcome relief for the ears. TVAM is basically one man with a guitar and a bloody huge television. I’m sure he was adding vocals to all this when we entered the room but yet again what we witness is the site of a half decent band where all the members have walked out simply leaving the guitarist to simply get on with things on his own. In front of a bloody huge telly. We hear what could be a three minute version of the intro to “Holiday in Cambodia” and we’re left wondering “why” ? We think we recognise a tune and again wonder “why?” and we enjoy the “Public Service Broadcasting” style atmospherics during the final tune before watching the man struggling to get the bloody huge telly down the narrow staircase.

Tomorrow we’ll be listening to everything this bloke has online and going “cor bloody hell” (therefore answering our own question as to what is “The point”), but it felt like we were being short changed a bit here watching someone playing karaoke guitar intermittently over a (superb) backing tape.

Over at the NIGHT & DAY we find ourselves wondering “why?” again. Why or how did that circle appear on the list of bands we’d made a tiny effort to listen to before we left home appear. Our tiny piece of paper which today, as it is with all events such as these, becomes an important tool we need to prevent us from tapping strangers on the shoulder every ten minutes to enquire who anyone is. And then getting the same people to repeat the answer because in loud rooms it’s difficult to understand what your mates are saying, let alone a random stranger with an accent that could originate from simply anywhere. Half of JURASSIC POP have made an effort to dress up. The singer is overawed about appearing in Manchester. He talks too much in between rubbish songs based around a film I haven’t seen therefore any humour or relevance has gone out the window before we get to the third tune (a cover of “Crazy Horses” with different words). It’s dreadful and we walk out of the first act all weekend.

Which is fortunate as our entry into The MINT LOUNGE sees us standing in front of a bunch of men sitting on stools and chugging away on acoustic guitars complimented by piano, trumpet, drummer and slide guitar. BOZCHESTRA (Pic Below) it says on our scrap of paper and we decide after ten minutes that if this was Eurovision this is where our douze point would be heading. You can tell these are experienced musicians doing what they love. Musically it’s like listening to someone like Sigur Ros being performed by people who don’t know who the Icelandic band are and without the electronics. Its ideal for a Sunday afternoon hangover and we discard our prejudices against instrumental artists and go to make some investigations that result in us learning that the main man here is a likeable chap called BOZ HAYWARD who has worked with many different musicians over the years and is already known on these pages.

SISTERS at the castle get through a couple of songs whilst we’re there and we exit wishing we’d seen more whilst arguing whether they really did sound like the AFGHAN WHIGS or not. A decision to visit CORD, the only venue we’ve not been to yet allows us half a dozen tunes in the company of the delightful FUZZY JONES who, along with one other entertain us with some wonderful acoustic tunes that on first impression are tunes we need to hear more of sometime.

A SUDDEN BURST OF COLOUR, a Scottish (Instrumental) quartet are on stage at Gullivers looking awkward and shaking their heads towards each other which suggests that  all is not well for these boys up there. However out in the audience we’re all marvelling at the wondrous gigantic noise these chaps are making. This lot probably have listened to Sigur Ros and Mogwai in their lifetime and this is epic stuff. They just need to learn how to blag their way through shows as their own awkwardness was the only downside to this gig.

Richard Lomax over the Road at the Castle looked good and sounded good. We caught the one song and have been plugging into his soundcloud stuff since we got back, SIGNALS are basically pleasant, polite inoffensive and make you start whistling Everything Everything tunes for ten minutes after they finish. KAGOULE (Pic Below) back at the SOUP KITCHEN were a tremendous early evening treat. Their 90’s alt-rock influenced guitar heavy thumpers with dual male/female vocals should be reaching out to a much larger audience in months to come. Their “Made Of Concrete” video is ace -check it out.

MARSICANS are another band to add to the ever growing list of young upstarts we’ll probably hear a lot more of in times to come. Looking like a boy band slumming it in the depths of a Manchester basement and sporting some of the cleanest pure floppy fringes we’ve not see since the last Eliza and The Bear video, these were great. Vampire Weekend and the aforementioned Eliza And The Bear come to mind with their anthemic choruses, twangy guitars and superb selection of tunes at their fingertips. It’s impossible to call any of these personnel the “lead singer” as they all swap roles as each tune sounds as good and anthemic as the next and all appear to be potential singles one day (if they aren’t already).

Time next for CRUSHED BEAKS (Pic Below) who we’d seen before but any impression they left us with then has since been lost. Tonight they are the surprise of the weekend. Here’s a trio in the possession of a hatful of decent tunes we’ll all be attempting to get our heads around as one year fades to an end and another appears over the horizon.

CASSELLS are a skinny shirtless angry duo as are DELTA SLEEP, who we’d met down the pub earlier in the day. Delta Sleep are very much like all the other noisy jerky guitar driven combos with loud bits quiet bits and bits that change tempo when you’re least expecting them to. We’ve seen a lot of this over the weekend however they get brownie points for having some vocals amongst the mayhem they providing up on the Night and Day stage.
Is it wise to tell you I gave up at this point , retired to the edge of my bed to watch an eight goal thriller on Match Of The day involving two teams I have no interest in ? JAJA OK and EMPORER YES! were absentees to the days fixtures and the thought of one more lap around the Northern Quarter was not something I needed anymore. Carefully Planned #5 has broken me. The fear of witnessing anymore Fugazi inspired music is to blame and I fancied a lie down for a bit. THE CHAP at half eleven were always going to get president over anything today. This was established before we’d left home a few days ago and this came about due to that old fashioned tool of communication: The word of mouth and the wireless. The Chap (Pic Below) consist of three very cool men who look like (and dress like) A geography teacher, a swimming instructor and a younger version of the God Almighty. 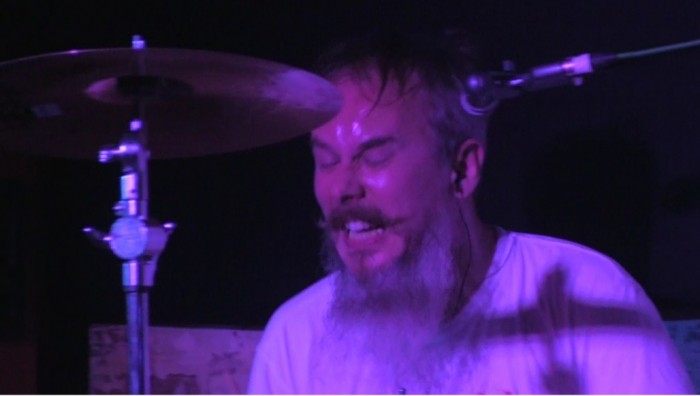 They’re miming the first song. They’re pointing out to people in the crowd by the second and treating us to some huge catchy tunes that we fall in love with the moment each one begins. As it was with AK/DK the previous evening, those in attendance here will be satisfied about they way in which this day has ended. Six albums this lot have at our disposal. A lot of catching up to do granted, but the latest offering must surely be the place to begin (that way you’ll be as up to date with them as I am at the moment).

Feel free to count yourself how many bands that was. There were about 150 to chose from and even now as I sit here tapping away at this knackered old keyboard I’m concerned that one day I’ll find out about someone I missed that I’ll look back on regretfully.

The Soup Kitchen was always going to be my main place of attendance when the schedules were released and I’ll miss that unique smell of this venue more than anything I imagine. A mixture of incense, spilt beer, sweat, damp and band’s discarded worn out dripping T-shirts and left in the dark corner of the room I would guess are contributors to this.

The veg Curry upstairs was very good as well and as for Mathew …we’d love to have thanked him personally but every time we caught a glimpse of him he was either entering a venue we were leaving or leaving one we were entering. We didn’t breathalyse the man.

Thank you Mathew and thank you to all the other Carefully planned people who sat by doors, stood by mixing desks and probably didn’t have as good a time as we did.

A wicked two days – if you weren’t there you really missed out.We’ll prove this in time.

All words and photos by Keith Goldhanger. More writing by Keith on Louder Than War can be found at his author’s archive. You can also find Keith on Facebook and Twitter (@HIDEOUSWHEELINV).