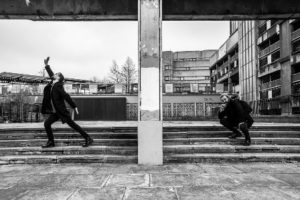 Today were premiering the awesome new single from London duo Frauds who’ve returned with a blistering and pointed critique of the fur industry and more.

“Canada Goose Step is about all that is unnecessary and destructive. A decorative fur trim hood is the perfect metaphor for a culture that happily causes suffering for something as trivial as a status symbol. Gleeful ignorance in pursuit of the ultimate goal – ‘I can afford something that others can’t.”

The song was recorded by Jimm Zorn of Black Country Recording Company whose Wolverhampton studio was tragically destroyed in a fire late 2018. The band have been campaigning for awareness in order to aid in his recovery. The single will feature exclusively on a split 7” by infamous Birmingham promoters Die Das Der alongside Kendo Nagasaki.

Through their now established yearly South-London festival ‘Sunburn’, Frauds have created a scene around bands such as JOHN, Melt Dunes, Youth Man and more. They’ve gone on to support personal heroes Future Of The Left as well as Reuben frontman Jamie Lenman, and last year they could be found on the bill of 2000 Trees alongside the likes of Bloody Knees and Demob Happy. Both of which invited them back immediately to play again this summer.