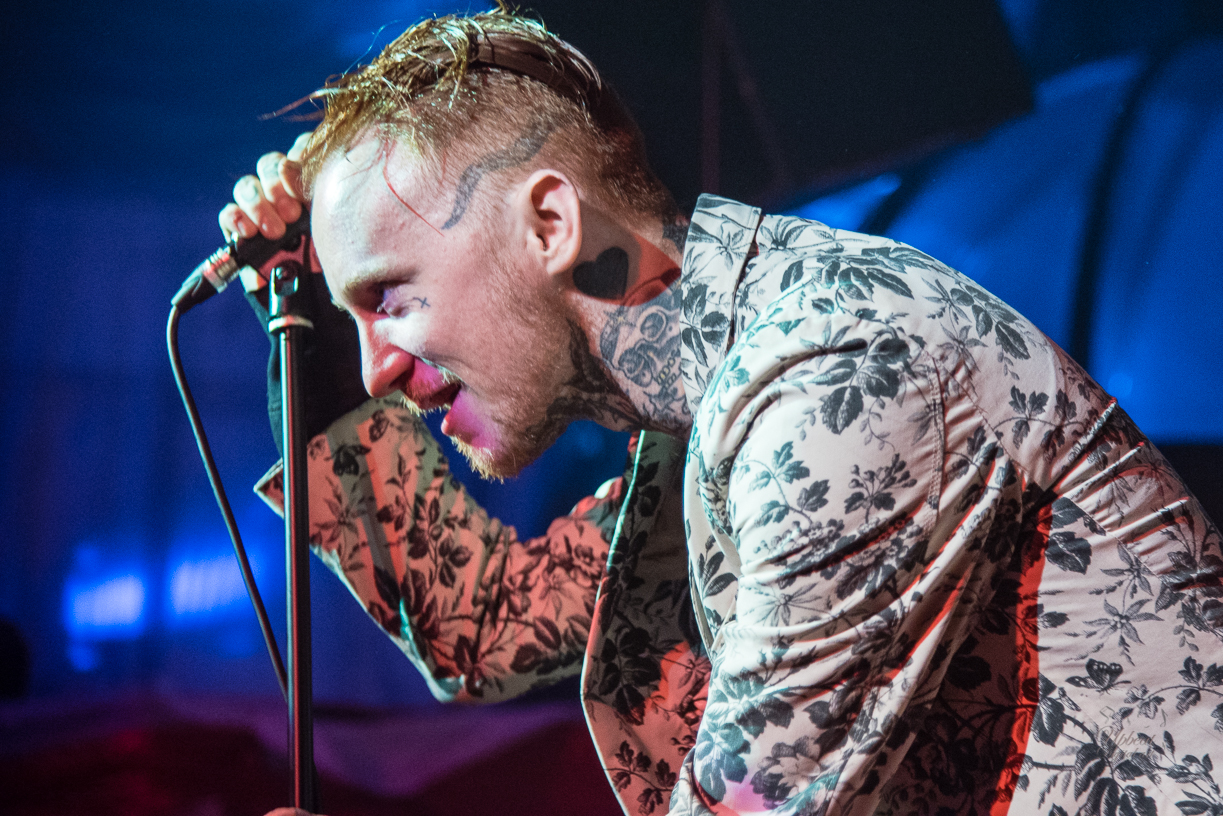 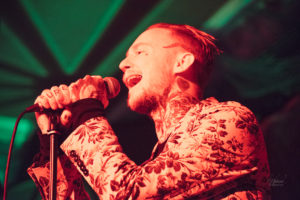 You know exactly what you are going to get at a Frank Carter show.  Powerful, passionate Punk Rock, delivered with sincerity and an overwhelming sense of theatre. So it was when Carter brought the rattlesnakes to Bournemouth.

I unashamedly adore Frank Carter.  I am grateful that Carter keeps the tradition of superb British hardcore punk alive.  At Carter’s shows I am delighted to see an audience where old school punk fans like myself mingle with the bright young people who are making their way into the punk scene on the back of the explosion of pop punk bands who are making a huge impact on the UK music scene.  It is also a delight to to see Carter supporting some of the new small venues in towns he has never visited before.

Credit has to go to the Winchester for taking a bold step to support live music.  The Bournemouth conurbation has long needed a venue of this size to feed the gig loving public who are desperate to see upcoming live bands in the area.  In the Winchester it has one at last.  The Winchester has the set-up to be every bit as successful as Southampton’s Joiners.  In fact the Winchester is a better shape, has better lighting and better sound so, with a little support from the public it should prove to be a winner.  The fact that Frank Carter sold out the venue in less than a day certainly shows the strength of Frank’s growing fan base and the desire of the public around Bournemouth to attend quality gigs. 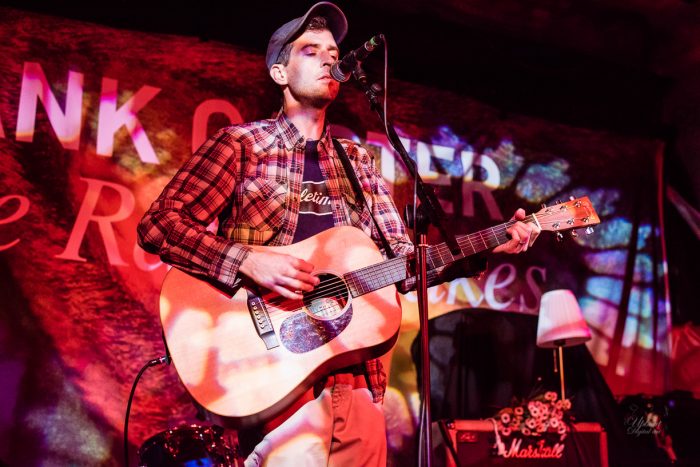 Those who came to the Winchester last night certainly had a top nights entertainment though some may have been surprised to find the evening opened by a solo acoustic singer. Defeater frontman Derek Archambault’s solo work comes under the name Alcoa.  He sings alt-country and I enjoyed the laid back beginning to the evening.  The evening hotted up considerably with the arrival of garage rock outfit Thee MVPs.  The London based four-piece delivered and exciting and driven set full of excellent guitar work.  These guys are really well worth checking out.

Main support for this tour comes from one of this years most exciting newcomers.  Dead! are currently London based and have just come off a summer of major festival appearances which included Reading and Leeds.  I have seen these guys at festivals and filling support slots on about five occasions this year and they never disappoint.  The fact that Dead! are being supported by the likes of Daniel P Carter and Zane Lowe tells you that these guys are set for big things.  They are one of the cornerstones of the UK pop punk explosion and are picking up followers wherever they appear. 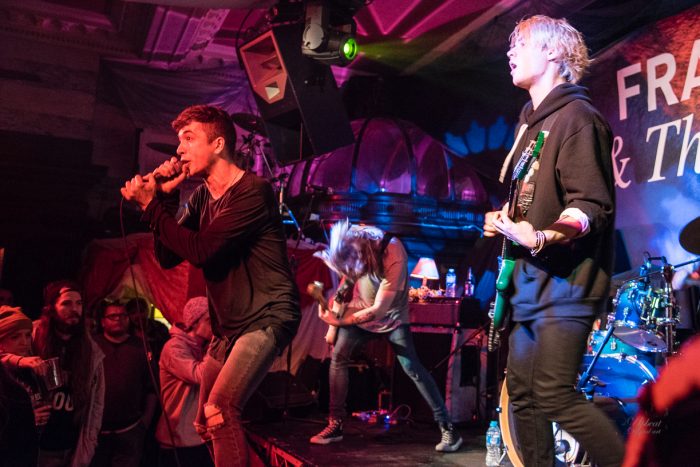 Chatting to some of the boys after their set Dead! told me that they thought they might be a bit out of their comfort zone with Frank Carter fans looking forward to some hardcore, in fact they have found that Carter’s audience has taken them to heart.

Of course the main event was Carter and the Rattlesnakes and as soon as Frank took the stage you knew it was to be an extraordinary evening.  Carter was on fire, passion poured from every pore, as he stared into the crowd during the lyrical break during opener “Trouble.”  As you would expect the crowd went crazy as they leapt around singing back every word.  I watched as Frank smiled a little knowing smile.  Halfway through the first song he already knew he had the entire audience with him and that knowledge spurred him on throughout the set.

Anyone who has seen Carter perform knows that he loves the close interaction with the crowd.  No-one would be surprised that Carter was off into the crowd, though some might wonder why it took until the end of Juggernaut, the fourth song, before he went walkabout over the heads of the crowd.  Frank crossed from the stage to the bar where he took up position to hold court from the back of the audience.  On reaching the bar we heard the first of three songs from upcoming album Modern Ruin.  “Lullaby” was dedicated to Carter’s little daughter, who turns two next week.

As Frank made his way back through the crowd we were “treated” to the antics of that one guy at every gig who has to behave like a huge dick!  This miscreant thought it a good idea to try sticking his finger up Franks ass.  Not clever! Not appropriate and Carter certainly didn’t find it funny.  To his credit Frank called the idiot out, whereas in the past he would have chinned him.  Again to his credit Carter defused the tensions soon s he got back onstage to play the title track from the new album.

At this point Frank explained that punk was all about equality and invited the girls in the audience to go stage diving.  Many of them did and the audience went frenetic.  The mosh-pit was brutal, two girls next to me where knocked over, one sustained a cut on her eyebrow, another a huge black-eye.  To the audience credit the girls were quickly rescued and looked after. 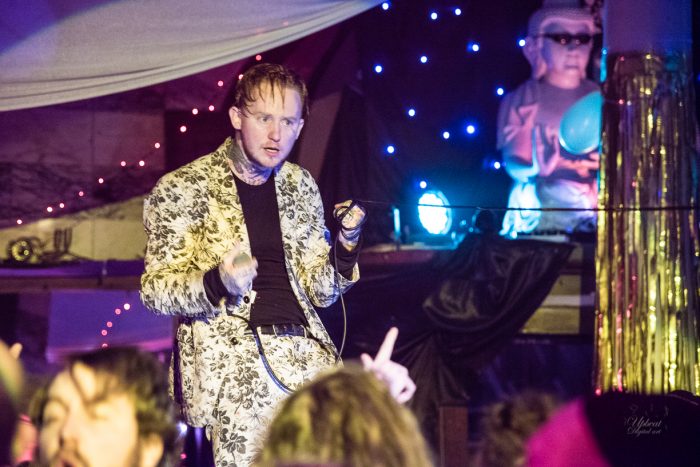 The show wrapped up with a hugely powerful trio of songs.  Snake Eyes demonstrates that Carter has lost none of his angst but the Devil Inside Of Me and I Hate You really stole the show.  During both songs Frank allowed the audience to sing many of the lyrics and boy did they sing.  Every voice was raised in homage to a man who keeps your fires burning, a man who inspires hope, who loves to see his fans party and who lives for the moment.  It is a cliche to say that you should always leave your audience wanting more.  It is no exaggeration to say that there wasn’t a single person in the audience who wanted to see Frank Carter leave the stage.

I spoke to Frank before the show and what he told me has me even more excited for the release of Modern Ruin.  It promises to be an epic release.  You can hear all about the inspiration for this new work here on Louder Than War in the coming days.

Modern Ruin is due for release on January 27 and is available to pre-order now.

Frank Carter & The Rattlesnakes are in the internet here:  They are on Facebook and Frank Tweets as @therattlesnakes and @frankcarter23