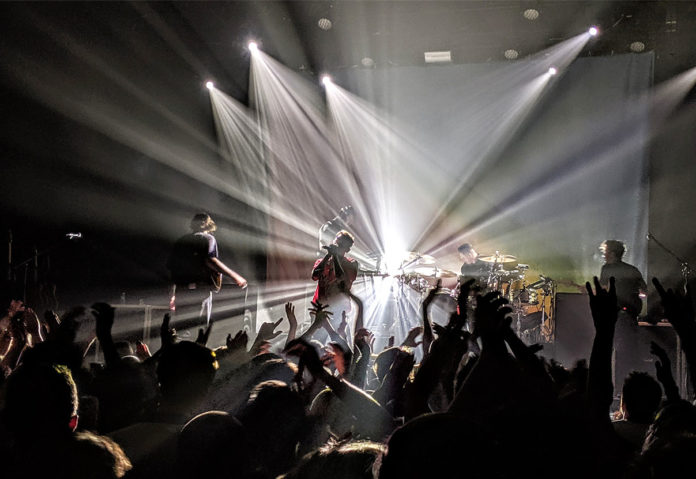 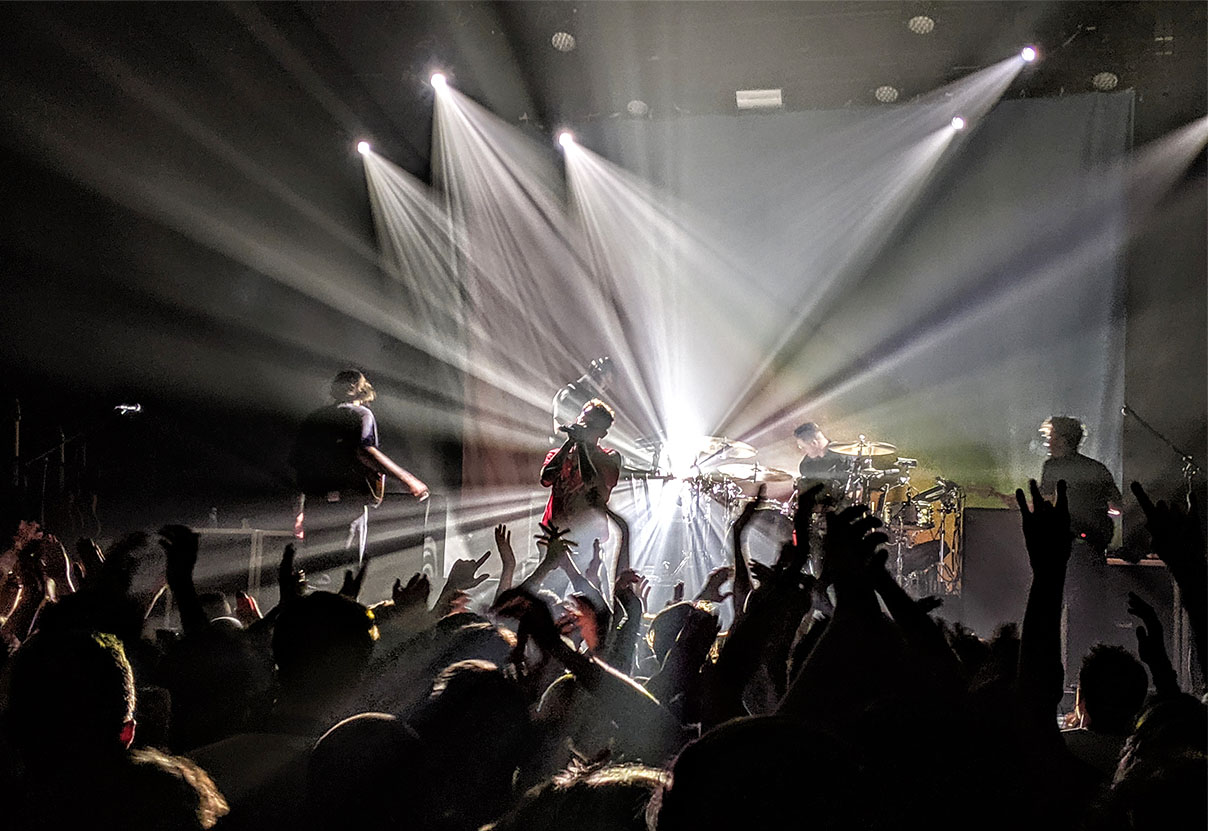 Frank delivers his blend of furiously pounding, distorted punk riffs and melodic memorable hooks, like it could be his last night on earth.

Under the shadow of Sacré-Cœur Church in Paris, over a thousand Rattlesnakes fans are swarming into the Élysée Montmartre for the opening night of Frank Carter & The Rattlesnakes’ European tour for their 2019 album “The End of Suffering.” I imagine most of the crowd are thanking their lucky French stars that the show is going ahead after the band were forced to cancel the whole US leg of their current tour, following lead singer Frank’s September car accident. But still would we see the recently recovered, energetic singer go Full-Frank, or would he tone it down for his own safety? Obviously, he did not tone it down. Not one bit.

The lights go down, and the tension becomes palpable, as the eerily cinematic tones of an Ennio Morricone soundscape sweep across the room. Amps are flicked on and dissonant feedback swells into a deafening roar as touring support band Kid Kapichi launch into their absolutely monstrous opening track “Revolver.” Setting the tone perfectly for the evening with the lyric “Cause tonight’s really feeling like we’re in a wild western ‘Ahhhiyaaaiyaaah!’” The main riff punches you in the face with a sound like Royal Blood after a Tarantino movie marathon.

Signing off with the onstage arrival of a European Flag and an Anti-Brexit disclaimer to the tune of “Fuck Boris and Fuck Brexit, we love you Europe!” Kid Kapichi depart, having definitely stamped their mark on the 1,300-strong Parisian crowd.

During the short changeover, I see people in the front row genuinely doing some stretches – in anticipation of a 90-minute class of “Moshersize.” Four fifths of The Rattlesnakes abruptly storm the stage, all dressed in black, with the low lights angled behind the band rendering them enigmatic silhouettes as they begin the lurching, stomping riff of “Tyrant Lizard King.”

The man himself, Frank Carter strides onstage, eyes wide, taking in every inch of the Élysée Montmartre appreciatively. “Full of beans” doesn’t even begin to describe Frank’s onstage energy levels. Frank delivers his blend of furiously pounding, distorted punk riffs and melodic memorable hooks, like it could be his last night on earth. It’s not long before he launches himself headfirst into the crowd, emerging fully upright, power surfing the wave of hands like a Punk Rock Kelly Slater with an axe to grind.

But the 90-minute show isn’t just about being a ball of manic energy, there are plenty of moodier melancholic moments that let the near operatic quality of Frank’s vocals soar through the room. Songs like “Love Games,” and “Anxiety,” from the recent third album, give the band a minute to breathe, but let Frank channel his inner Amy Winehouse and howl into the heavens with lines like “If Love is a losing game, then why do we try it again, and again, and again, and again…” 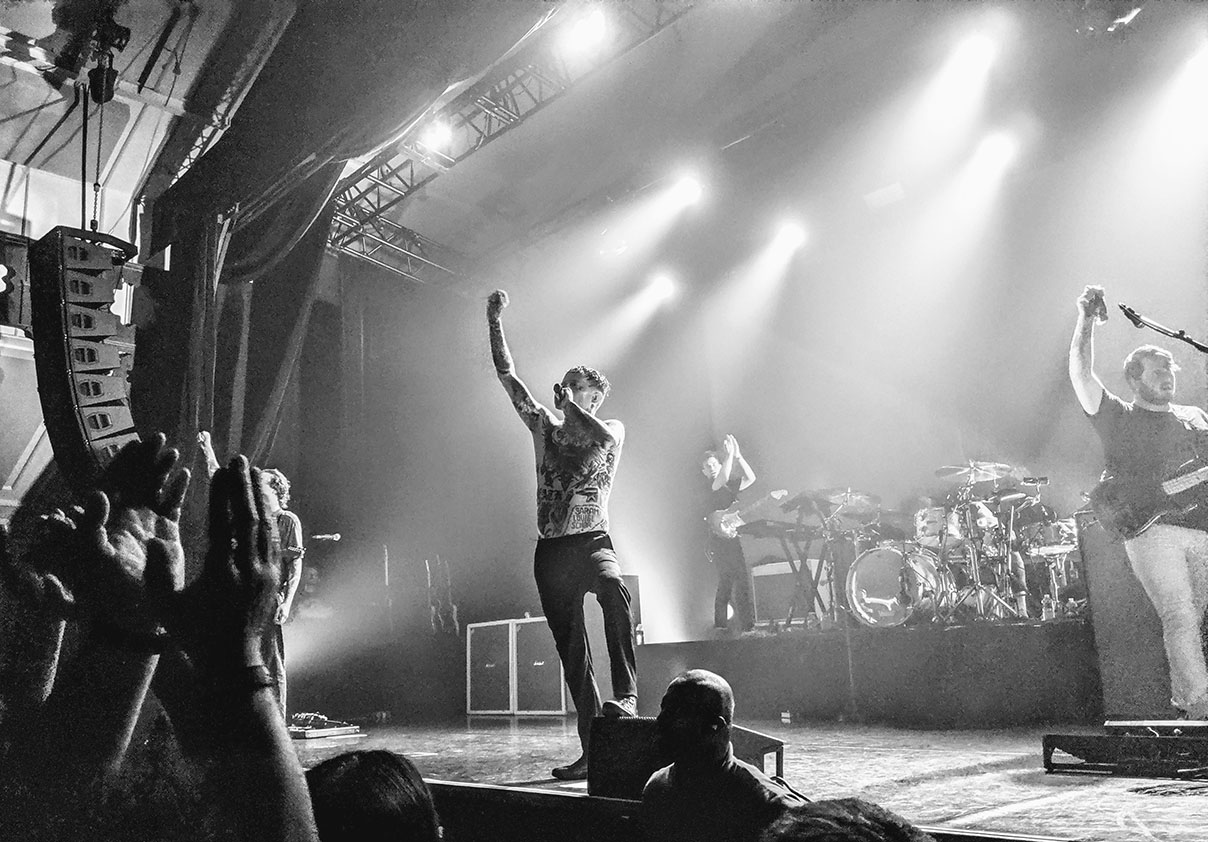 At the sound of the sinister baritone chugging guitar, signifying the start of debut album track; “The Devil Inside of Me”, sound track to a particularly violent scene in “Peaky Blinders;” the whole crowd immediately drops to the floor. You could tell that in 20 seconds, the entire room was about to go absolutely mad. As the beat drops and the band explode into the chorus, the entire room pops up like an army of demonic Jack-In-The-Boxes as the turbulent circle pits suck half the room into their brawling riptide.

Closing the 18-track set, with the bonafide sing-along anthem, and gleefully spiteful favourite from their debut album; “I Hate You,”; guitarist Dean Richardson opens with a slow bluesy lick while Frank ignites the song with the fantastically bitter opening line; “You are nothing. You are nothing to me. You’re a useless F****ing C***, you are nothing to me”. Encouraging the crowd join in, “Sing it for me, sing it for my country that doesn’t know what the F*** it’s doing right now,” Frank implores. The drums kick in and the whole crowd is hollering every single vitriolic lyric back at the band as Frank beckons Kid Kapichi frontman Jack Wilson, onstage. Singing arm in arm with Frank Carter, to a full house in Paris, Wilson is probably pinching himself, relishing the moment as much as the enraptured audience were.

All words and photos by Jack FLynn, this is his first review for Louder Than War