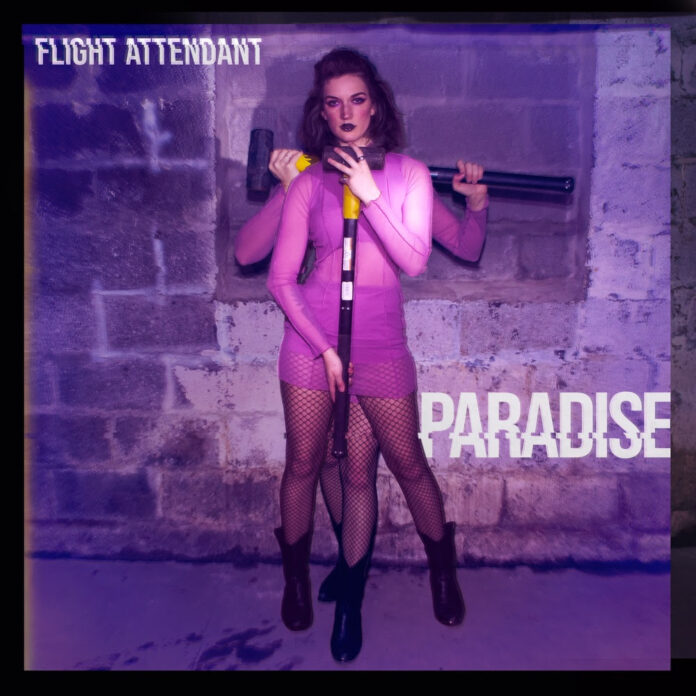 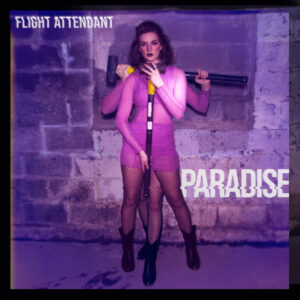 Out Now on all streaming platforms

As Nashville-based band Flight Attendant release their seventh single, Paradise, Louder Than War presents the premiere of their accompanying video and also takes the opportunity to speak with singer Karalyne Winegarner to get the low down on life in an iconic musical city and beyond.

Flight Attendant first announced their arrival on the local Nashville music scene with their first single, Slow June, in August 2018, with a kind of slow-mo post-punk groove. It was an intriguing start which was to help cement a growing reputation on the local live circuit but was not necessarily a guide for what was to follow.

Since that first release, Flight Attendant have produced a batch of songs featuring a whole range of styles and sounds from hypnotic and pulsating guitars, through a sensuous yet sombre piano-centred ballad, all the way to a frenetic and heady post-punk groove. So any attempts to pigeon hole their sound remain somewhat futile and the only certainty is that they have no link whatsoever with the recent TV series of the same name.

Flight Attendant are Karalyne Winegarner on lead vocals and keyboards, Vinny Maniscalco on lead guitar, Nikki Christie on viola and vocals and Derek Sprague on drums, together with Mike Cottrell on bass. Whilst it’s not easy to stand out from the crowd in an iconic musical city like Nashville, with the help of Grammy-winning producer Charles Yingling it certainly looks like this band is having a damn good go at it.

New single Paradise is a very deliberate attempt to steer our focus towards a state of mind that has been somewhat stifled through an extended period of lockdown. With shimmering guitars, a pulsating beat and anthemic chorus lines, it’s another truly exhilarating ride which finds us “waking up in paradise”.

The song conveys a strong feeling of release from all those restrictions that have enveloped our lives and the sense of joy that we should feel when we finally come out of the other side of lockdown. This is illustrated perfectly in the video through the sense of fun and freedom that is reflected in the band members antics as they lark around in a local junkyard seemingly without a care in the world.

In advance of Paradise being released, Louder Than War took the opportunity to catch up with singer Karalyne Winegarner to get some further background on growing up in Nashville, the development of the band, life through lockdown and future plans.

LTW: Which artists, groups and songs sound-tracked and shaped your early years in life?

LTW: Who or what inspired you to consider taking up a career in music?

KW: “My grandmother, also named Caroline (spelt normally) taught me piano as soon as I could reach the keys – she also taught me some banjo. She was in a Bluegrass band in Arkansas, I forget the name – and was bigger than the Beatles to me.”

LTW: What brought you together as a band?

KW: “We met through the musical social network that is Nashville’s hospitality industry; aka we all met where we once worked at this restaurant called 5th & Taylor.”

LTW: How would you describe your musical journey as a band so far?

KW: “It started out for fun – and it has stayed that way, we have just gotten much better. I also started as our drummer and would sing to fill space. As we started playing more, I switched to just singing and keys and left the drumming to our man Derek.”

LTW: How do you as a band go about writing and developing songs?

KW: “Someone brings a hook or melody to the table and I often have some “trigger” words that spark more of a song. Then we jam on it until we like it or don’t. If we like it, then I will re-work the lyrics over and over until they are ready for the studio. Then we run it by our producer, Charles Yingling and he guides the final sound.”

LTW: Has your base in Nashville, a place steeped in musical tradition and significance, in any way influenced your sound?

KW: “Absolutely! I have seen more shows in Nashville than I think most people see in a lifetime – it is a city of extremely talented people and challenges us to be better, more technical musicians every day. I’d say it has also given us the courage to really work Nikki, as the viola player, into a large part of our sound.”

LTW: Have you had a chance to play any shows further outside of Nashville so far?

KW: “Yes, but not many since the last year and a half has been riddled with Covid, and we haven’t been the band we are now for much longer than that. We did do one socially distant show at Mississippi State, which was rad.”

LTW: Given that your new single, Paradise, focuses on a sense of state to which the whole world currently aspires to right now, has the global pandemic and resulting lockdown in any way influenced your songwriting style or lyrical content?

KW: “Absolutely. Paradise is about finding that freedom and release from the anxiety-ridden days of Covid. This was also the first music video we have ever done where we weren’t socially distanced – so we really went ham. The pandemic has been a huge influence on our entire sound and lyrics – and I think you will hear it in a lot of our songs yet to be released.”

LTW: How have you all coped through the long period of lockdown?

KW: “It has been rough for us like for many others – that feeling of uncertainty in how things and our industry will play out – but it has honestly been a wonderful time to pause and write music and paint, and be creative without any deadlines. Now that things are starting up again, I might even miss being an artist for nobody but the birds outside my window.”

LTW: You describe yourselves on your website as a psychedelic space rock band, and yet your seven singles released so far display a number of different styles in your sound and approach to your music. So what can we expect from your forthcoming debut album?

KW: “I think the word “psychedelic” might need an update as far as describing us goes. It is really hard to nail down genres! We are a rock band and our album is going to have pulsing rhythms, cinematic movements and it will be “psychedelic,” in a sense that it will leave you seeing colours.”

LTW: Assuming we are heading towards the end of this very dark tunnel that is lockdown, what are your immediate plans for recording and touring over the next 12 months or so?

KW: “We have tons of songs locked and loaded, ready to go. An album is definitely on the way. We are also getting more creative with how we release. Livestreaming to platforms like Reddit and Twitch have actually gotten us larger audiences than most physical venues could! I will often stream to my reddit account and my twicht.tv/karalynew account and paint and do Flight Attendant songs, and will get 3,000+ people watching. So, until things are really cleared up, we will keep being creative with how we release. Really excited to play a full band livestream on May 7th to these accounts too! It will be our first full band show on reddit, and I am kinda nervous about how we tech it out – but I know it’s gonna be a hit!” 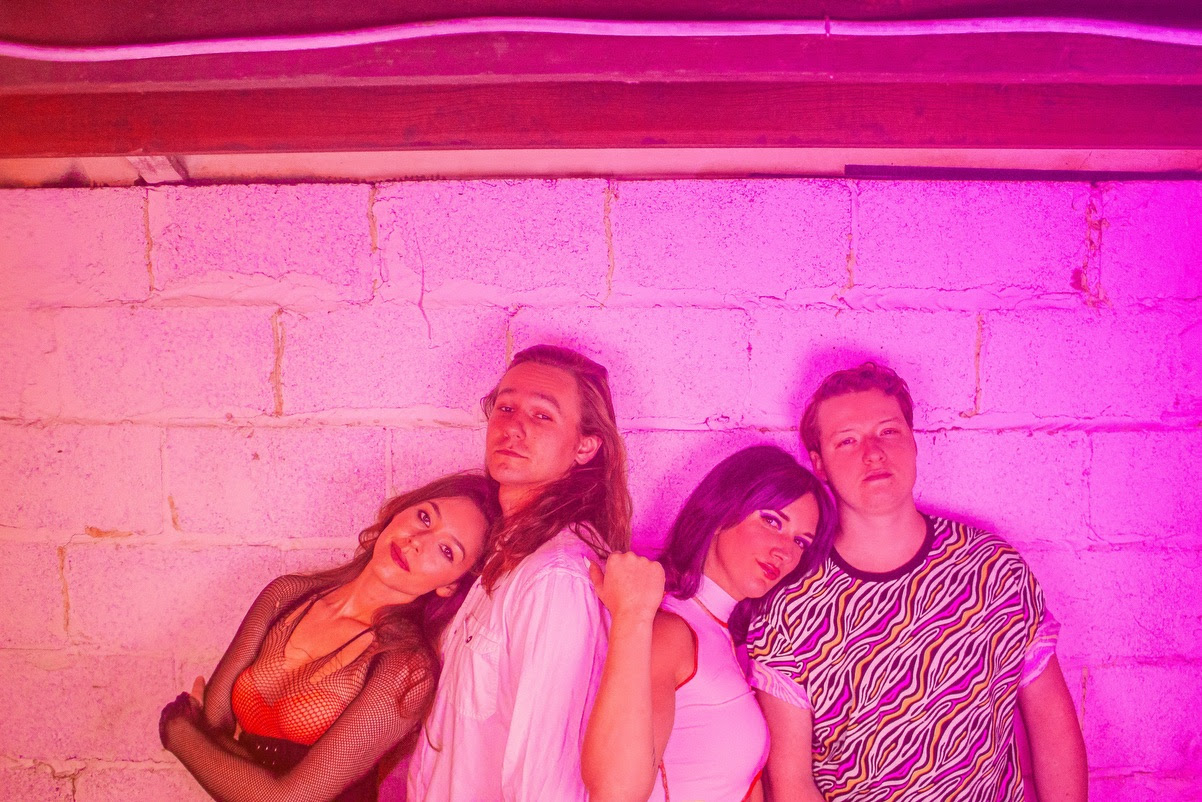 If you want to tune into Flight Attendant’s live stream tonight (7 May 2021) from the Blueroom Studios in Nashville you can access it via Reddit using this link. There will be a music stream of the whole band here at 8pm CST (2am UK time).

With a blend of alternative and heavy rock, glam, grunge and pop, often with anthemic overtones, together with a mix of both sensuous and uplifting vocals and provocative lyrics, Flight Attendant have emerged as a very exciting and eclectic indie rock band and Paradise certainly adds to their growing reputation.

Backed by a wealth of songs already released and in the locker for the future, together with their ever-growing reputation as a live band, there is little doubt that Flight Attendant are now ready for a national or even world stage. I am certainly looking forward to their debut album which will hopefully appear later in 2021, so watch this space for more as I am certainly on board for the journey ahead.