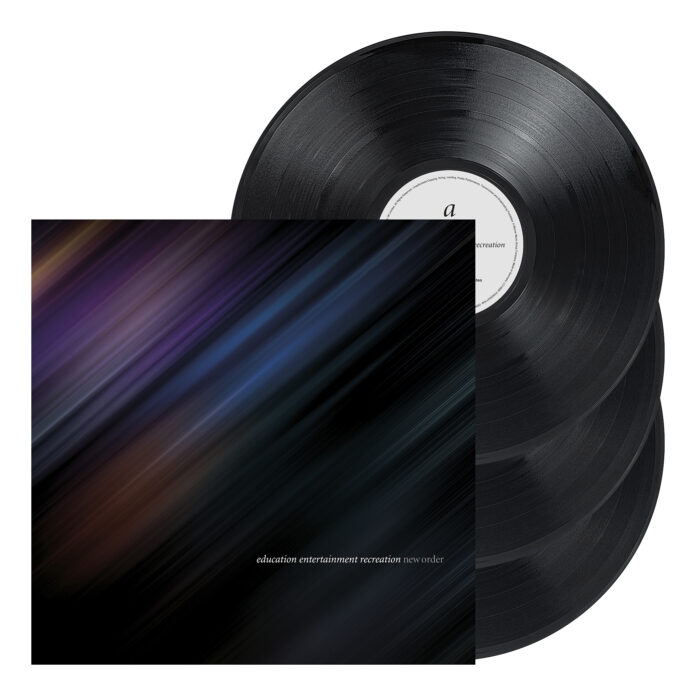 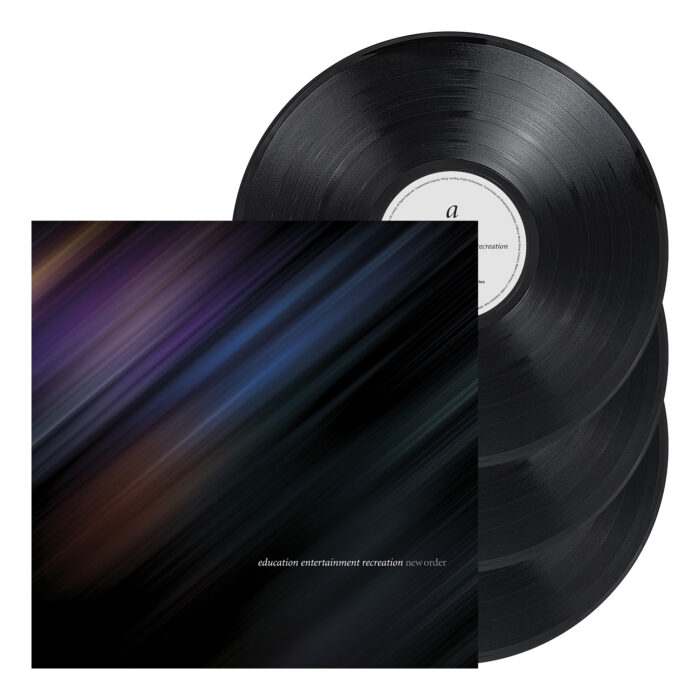 Over the last decade, New Order have performed dozens of shows and released a handful of live albums, including Live at the London Troxy (2011), Live at Bestival (2012), NOMC15 (2017), and ∑(No,12k,Lg,17Mif) New Order + Liam Gillick: So It Goes (2019). The release of Education Entertainment Recreation (2021) makes five. Three vinyl LPs, 2 CDs, and a blue-ray disc. It’s the lengthiest of the live releases yet coming in at about 2 hours and 20 minutes, and the album and accompanying film illustrate the band’s sound and vision at Alexandra Palace in London. Indeed, listeners and viewers get a rare opportunity to travel back to a cold and rainy London night on November 9, 2018 for a sold-out show. A seemingly sedate start to the setlist echoes the crepuscular atmosphere outside the venue and slowly builds to a radiant performance. With Education Entertainment Recreation, New Order take listeners across both Joy Division records and eight subsequent studio albums (in effect, the setlist includes tracks from everything but Movement) all inside an illustrious English venue.

I was in the audience at the November 2018 Alexandra Palace gig, or Ally Pally as the venue is more affectionately known. On a clear day, the hill on which Ally Pally sits offers a view of the London skyline in the distance, but visiting the space on a cold and dreary night feels a bit like a descent into a work of Gothic fiction. The damp cold permeated the concert space until the neon stage lights warmed the room. Although its historical layers wouldn’t have been obvious to anyone in the crowd that night, the venue is a palimpsestic place marked by varied uses since its opening in 1873. The enormous structure functioned as an internment camp for Germans and Austrians during World War I, and parts of the space were later leased to BBC Television in the 1930s, making it the site of the first high-definition public broadcasts. German bombing damaged the Great Hall during World War II, but BBC News broadcasts continued from the space in the years that followed.

The venue also has a storied rock’n’roll past. Pink Floyd, the Pretty Things, and Yoko Ono performed there in the 1960s. Led Zeppelin, Lou Reed, and T. Rex sold out shows at Ally Pally in the 1970s, while the Slits, the Raincoats, the Au Pairs, and the Stone Roses appeared the following decade. The Kinks played one of their final gigs at this space in the 1990s, and believe it or not, it’s where the original lineup of New Order performed on New Year’s Eve in 1998. Speaking of New Order playing in London, let’s get back to the present live album and accompanying concert film.

The Education Entertainment Recreation film, directed by Mike Christie, generates an immersive experience for the viewer. Even if you weren’t at the gig in London, the cinematic accoutrements at work resurrect the sensation of being in the crowd. At various points, graphics from on-stage projections behind New Order become astronomic in size and superimposed on the screen. Visuals become vital to experiencing the music. Regret is among the first songs on the setlist, and as Bernard Sumner reaches the chorus, a split-screen effect mirrors the joyful chaos that begins to build in the audience. During Ultraviolence, the fourth song on the setlist, erratic triangles of neon green light, like paper-clipped confetti, fall across the screen. One of the greatest uses of this digital technology materialises during Vanishing Point as monumental neon pink jellyfish swimmingly swallow the band, the stage, and the interior space of Alexandra Palace.

There’s also a certain anxious anticipation when you’re immersed in a live performance, and the editing reflects that feeling. With the number of edits I’d expect from an action movie—and with the duration of most shots right around a couple of seconds—the film reproduces the exuberant frenzy of hearing Steve Morris’s drumming bouncing off the Ally Pally walls and seeing the contrasting light beams coursing across the stage.

In terms of the songs themselves, the live album may start slowly but builds to an exquisite celebration of New Order and Joy Division. It opens with the introduction to the show, Wagner’s Das Rheingold – Vorspiel, a piece at once markedly operatic yet soothing in its sonic form. What immediately follows is a pronounced fragility as Bernard softly sings the lyrics to Singularity, Regret, Love Vigilantes, and Ultraviolence – the latter of which has only recently begun appearing regularly on New Order setlists. By the time the notes to Disorder begin resounding, a vivaciousness overtakes Bernard’s voice that continues into Crystal, Academic, and Your Silent Face to close out the first vinyl record of the set. Your Silent Face, one of the most exquisite and haunting tracks from Power, Corruption & Lies, is steeped in beauty when New Order performs it at Ally Pally. Bernard even remarks on the song’s allure as the final notes sound, ruminating about how he’ll never tire of playing that song. It’s a fitting last track for the first LP.

The spiritedness of the performance becomes more vibrant in the songs that make up LP 2, starting with Sub-Culture and moving through Bizarre Love Triangle, Vanishing Point, Waiting for the Sirens’ Call, Plastic, and The Perfect Kiss. It seems apt that this live LP starts and ends with tracks from the band’s 1985 Factory Records release Low-life (FACT 100), a record that’s surely among New Order’s best studio albums (okay, Power, Corruption & Lies is my personal favourite, but Low-life is a very close second). When The Perfect Kiss starts, the concert film cuts to Steve standing up from his drum kit to operate the drum machine, an homage of sorts to Jonathan Demme’s music video for the single.

The third and final LP represents the heart of the Ally Pally gig. The succession of True Faith, Blue Monday, and Temptation sounds like the band at a live performance decades earlier, and the crowd buoyantly sings along. The encore then takes the audience further into the past. Bernard animatedly calls out to the flock of concertgoers, “are there any Joy Division fans out there?!” Atmosphere, which closes out the performance along with Decades and Love Will Tear Us Apart, etch Ian Curtis’s haunting lyrics and Anton Corbijn’s startling images into the walls, at last, of Alexandra Palace.

You can buy Education Entertainment Recreation from Sister Ray Records.