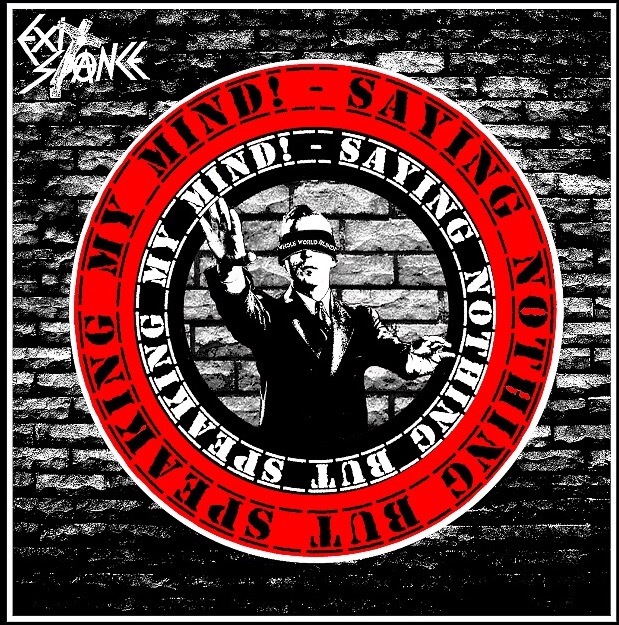 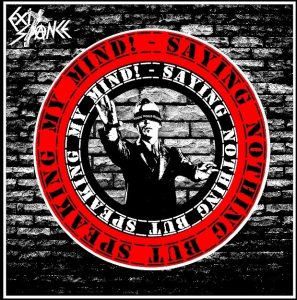 Saying Nothing (But Speaking My Mind)

Milton Keynes anarchists Exit-Stance release lost recordings of songs that should by rights have come out 30 years ago. LTW’s Nathan Brown gives them a spin.

I am a hypocrite, I freely admit. When the latest reformation of an old punk band featuring someone who once farted near the stage at one of their gigs is announced I am full of sneering disdain.  Why are far better, newer, bands being overlooked in favour of someone who has been absent since 1979 looking to cash in on 40 years nostalgia or indulge their mid-life crisis at a heavy door price. Nasty bastard aren’t I? Yet when I heard about this blast from the past I hit the pre-order button in an instant.

Exit-Stance were one of a crop of bands whose material was released by the Mortarhate label run by Conflict in the 1980s. A single and the excellent “While Backs Are Turned” mini-LP made a significant impact on the thriving anarchist punk scene at the time but then nothing. They had material ready to record for a new LP but they split. They were one of the bands of that ilk who I felt had more to offer but it was never realised. In 2004, members of the band got back together to rehearse the songs they had never released. 2 tracks recorded in a modest little studio, sat together with 3 good quality rehearsal recordings but, again, were destined to gather dust, until Imminent Destruction tracked them down and 13 years later (31 years after the songs were first written) they are finally seeing the light of day. This will probably interest people like me who were heavily invested in that 1980s DIY anarcho-punk movement, and it’s continuing morphing global manifestations.

Death abounds. Death and destruction in war. Slaughter of animals in the name of science. We can hide from it or face it and confront it. Exit-Stance do the latter. So if you are looking for jolly pop punk and happy bouncy escapism this is not for you. The exits are clearly marked.

“1916” kicks off with a heavy riff underpinned by a drone that is reminiscent of Killing Joke. Then the vocals kick in, and some militaristic drum rolls kick off an upbeat shouty political punk song – all identifiable as Exit-Stance.  What is noticeable across all the songs on this release is they have a distinctly beefed (soya chunked?) up, heavier approach.  The lyrics, as the title would suggest, are a tale of trench warfare from the point of view of a soldier – the horror of war. Something which last year’s jingoistic centenary celebratory “commemorations” eclipsed… “Not victims but fodder, drowning in mud, crying for mother”. That line struck me. My great grandfather had recounted to his sons that most soldiers he had heard die in the trenches shouted “mother” as they went. Reminds you they weren’t glorious warriors, just kids.

“Saying Nothing”, the title track, has a raw sound. Built around a repetitive riff that is driven by the drums and bass it hammers and hammers away with guitars dropping in and out in a sort of call-response. It’s got that tribal-cum-factory machine sound that early Joy Division songs had. The barked vocals distort in a way that many studio engineers might take hours to intentionally recreate and the repetition of “That’s not fucking funny” builds real menace. As the song appears to drop away, a metally guitar riff takes us off again – which to my ears is in the vein of Coitus. Then we are back into the rhythmic bass heavy main section again. Repetition is something that Exit-Stance always did well – hammering the point home. Repeat the message until it fully sinks in. 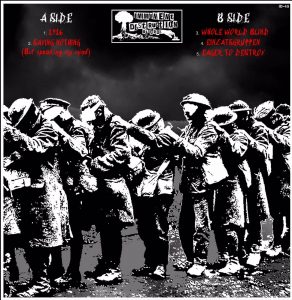 “Whole World Blind” starts off with distorted guitar supporting a soaring riff and has something of latter era Conflict about it. I’m reminded someone remarked how Exit-Stance’s singer Sean sounded like Colin of Conflict’s brother. It’s the angry, strident spitting out of lyrics that does it, and also something about the “estuary accent” (although MK is some way from South East London and the Thames). Another anti-war song, but more general than specific, it deploys the Gandhi quote: “An eye for an eye makes the whole world blind”. The back cover art provides the logical link between this song and 1916 – it’s a famous First World War image of a column of wounded blind soldiers leading their blind comrades which has been given a “pop art” treatment without losing its impact.

“Einzatsgruppen” starts as a bit of a departure with a heavy riff and screamed almost guttural vocals before breaking into a much faster tempo. During the second half of the song, driven by a heavy Amebix style bass sound, it breaks down into a grindy chugfest over which spoken word graphically retells the horrific arrival of German troops in a Ukrainian village in 1941. More slaughter. Aurally it really reminds me of the Amebix recordings that came out as “The Power Remains”. It’s that atmospheric live feel, a hint of echo, something subterranean even. Given the nature of the recording process it makes perfect sense.

“Eager to Destroy” has a mechanical heaviness you would normally associate with Industrial noise merchants – in this case I am thinking of Pitch Shifter. Exit-Stance of old attacked animal abuse on numerous songs, and it is clearly something they never stopped caring about. Over the backdrop of heavy downstrokes on the guitar, the word “vivisection” is repeated countless times, overlaid, echoed. There is no getting away from the subject. As I said above, this band know how to repeat the message until it can’t be avoided. The odd splash of phaser here and there works well with the semi-industrial style.

Exit-Stance always had a dark side to them in the past, a confrontational bleakness, somewhat morbid. It has certainly been intensified on this release. More songs would have been nice but I’m led to believe that sufficient interest in this record will lead to more recording. Whilst arguably some of the songs might have benefited from better recording, they sound fine and it would have been mere polish. I certainly own plenty of records that sound much worse recorded in a “proper” studio.

You can purchase the limited edition 12″ vinyl (while stocks last) or download from Imminent Destruction’s bandcamp site.