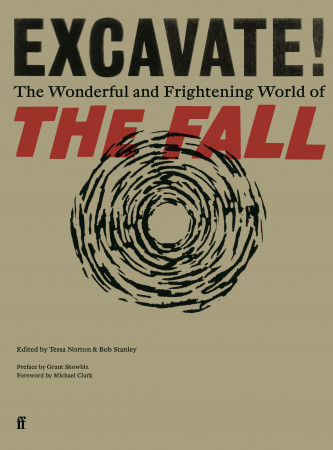 This is not a book about The Fall. This is a book of “the Fall-shaped hole they punched in the wall.”

When Norton and Stanley say this book is not a biography, they mean it! And that’s just the beginning. The contents of Excavate! are broad and varied, with a wealth of essays by writers in seemingly disparate yet deeply intertwined fields. It also contains an abundance of images, including reproduced ephemera like handbills and correspondence, fanzines, tickets and playbills, handwritten lyrics, and, of course, album graphics. It’s deeply philosophical, and as a whole the book sublimely raises more questions than it answers.

Excavate! should make any music-loving scholar, writer, artist, reader (and everyone else, quite honestly) absolutely swoon. It’s such a smart book: it asks the reader to think in new ways and to unsettle their own assumptions about The Fall. Norton and Stanley gather cross-disciplinary ideas and materials that invite us to make our own meaning about The Fall’s legacy, all while creating a work that’s gloriously accessible to admirers of the band across far-flung fields and walks of life. Through the collection they’ve put together, the editors reveal how The Fall can become a philosophy for the modern age.

The title’s directive—excavate!—permeates the publication in so many ways. At the outset, the creation of the physical book required acts of ephemeral exhumation by the editors. Norton and Stanley collated the myriad visual elements by sourcing their own record collections and the compendia of dozens of fans who preserved flyers, posters, notes, and other pieces of meteoric material.

By undertaking this work of excavation, the editors assemble an anthology that reflects inherent contradictions in the life of The Fall: the book itself can be owned by anyone who purchases it, yet as a constellation of materials from near and far, it’s owned by nobody in particular. Ian Penman’s contribution to the volume underscores this kind of consistent antithesis in Mark E. Smith’s life and work. And the word “excavate” itself contains contradictory meanings, at once a directive to unearth or to find, yet also an order to gouge or to submerge.

In its mandate, the title also commands the reader. To fulfil the charge to excavate!, we must construct our own meaning of the term. In so doing, we’re forced to acknowledge that any act of excavation is invariably incomplete given the word’s contradictory denotations. Just as The Fall cannot be contained by any single idea or form, our engagement with the band (and works like Norton and Stanley’s book) must be marked by the realisation that there’s always something more that’s yet to be discovered—more meanings, more connections, more aims.

Before I get to the essays in Excavate!, I want to tell you about the luscious reproductions of both black-and-white and colour ephemera contained in this book. The facsimiles are so textured and detailed that even the creases in the original handbills look real enough to produce tactile sensations. The deeply saturated colors underscore the great care with which fans and collectors have preserved the materials, and the album graphics give readers a chance to explore the luminous and eclectic designs of The Fall’s 30+ studio albums. In other words, even if you bought the book for the images alone, you won’t be disappointed.

Now back to the essays. Each of these pieces explores a distinct idea, theme, situation, or thread that gives shape to that “Fall-shaped hole” the band “punched in the wall.” Elain Harwood, for example, considers divergent architectural spaces. She contrasts the urban areas around Manchester with the pastoral, remarking on Mark E. Smith’s aversion to the latter. Harwood’s essay constructs one image of Smith, among many, as a kind of anti-flâneur. This notion of conspicuous contradiction, which arises across Excavate!, becomes salient in other essays, too.

Tessa Norton’s piece considers how and where knowledge about The Fall gets produced. She discusses various idyllic educational settings that might help us to understand certain artists, but not necessarily Mark E. Smith. “With Smith,” Norton writes, “you have the sense the world of the Fall just flowed out of him, or rather it seemed to come from beyond, passing through him.” Norton ruminates on Smith in relation to the filmmaker Dziga Vertov, who saw himself “as a camera,” and the artist Joseph Beuys, who saw himself as “a transmitter.” She hints at the ways Smith can at once be explained in relation to these cultural figures while intimating that the comparisons can’t explain him at all. Mark Sinker grapples with a similar conundrum but approaches it from a different perspective. He describes tracing “a route out of the nineteenth century deep into the trypophobias of Smith’s own brain,” ultimately determining that the frontman of The Fall wasn’t just shaped by characters from literary works past, but rather had the capacity to inhabit all characters simultaneously.

Other contributions draw out the idea of ostranenie—a term that originated in Russian formalism to describe the process by which the familiar becomes strange. The Fall, and Smith in particular, is marked by a mastery of the constant recontextualization of referents. What happens, for instance, when you take the title of Vladimir Nabokov’s novel Bend Sinister, itself a reference to a heraldic charge, and use it for an LP? Or what about entitling an album—I Am Kurious Oranj—as a quizzical nod to the Swedish films I Am Curious (Yellow) and I Am Curious (Blue)? Smith takes known language, puts it in a new context, and produces unconventional meaning for the listener. Scott King’s essay points out how Smith would engage in acts of excavation himself, as it were, to find the language and characters he’d ultimately make strange to listeners. Indeed, he’d trawl the local Prestwich newspaper for fragments that could be divested of familiarity and remade anew. Bob Stanley describes the ostranenie of The Fall best, specifying how Smith “understood the shifting plates of language.” Owen Hatherley further details Smith’s “heteroglossic riot of styles and tones,” alluding to ways the frontman’s language can carry multiple meanings at the same time, or simply none at all.

And what about all that talk of authenticity? Siân Pattenden reflects on the absurd question of whether The Fall was “authentic.” In so doing, she draws out a theme that persists across Excavate!: how the band’s distinctive nature defies definition but also defies replication. That question of authenticity is a funny one, and the term itself can have different meanings depending upon the context. In reproducing the ephemeral material surrounding The Fall—facsimiles of letters, flyers, coasters, and other materials that are, by their very nature, not authentic in the sense of being original or primary source documents—the book asks us to reconsider the nature of authenticity. In “The Work of Art in the Age of Mechanical Reproduction,” Walter Benjamin writes: “The authenticity of a thing is the essence of all that is transmissible from its beginning, ranging from its substantive duration to its testimony to the history which it has experienced.” Whether anything is authentic, then, doesn’t depend on its originality or its outward singularity, but rather its irreplicability. By this account, even facsimiles carry their own testimonies and thus authenticity—a photocopied handbill passed through hands, was folded a certain way by a particular person, was stored in a particular desk drawer . . . . All of that singular knowledge, layered in the ephemera, makes it duplication impossible.

At its heart, the book suggests that no definition of The Fall will ever be fully complete regardless of the amount of excavation that occurs. In turn, The Fall must always inhabit a realm of the unknown that we all seek to understand. To circle back to Walter Benjamin for just a second, if you’re familiar with his unfinished opus the Arcades Project, you know that this is a work that cannot be consumed in just one sitting. Rather, it’s a book that requires a constant return—coming back to its fragments over and over again in acts of readerly repetition—to gain new knowledge with each bit-by-bit encounter. Excavate! feels like a Mark E. Smith version of the Arcades Project—never finished, and always producing new meaning.