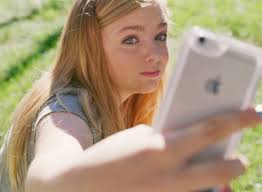 Out now at Home, Manchester and on general release

Eschewing middle-aged cynicism and the usual accusations of narcissism thrown at young adults, Lee Ashworth discovers Eighth Grade’s perceptive insight into how we are all trapped between screens and the shuffling avatars of our complicated lives.

It is hard to say which is more impressive in this film: the fact that such an assured and penetrating feature has come from a twenty-eight year old male director (Burnham) or the unforgettably raw yet controlled performance of its star, Elsie Fisher, vulnerable and churning with conflicted tension to the last.   At one point in the film, Kayla (Fisher), is challenged to hold her breath underwater.  At the outset of this film I  I did the same… and exhaled after 93 minutes.

There is a theory that horror films are derived, subconsciously, from fear of children. As someone who is persuaded by the veracity of unpalatable truths, I have some time for that theory. This year has already seen “horror” focused on the experience of childhood and how it intersects with the adult world in the near perfection of Kindergarten Teacher. Though to be clear, neither this film nor Kindergarten Teacher are in any way remotely horror films… but both conform to my idea of horror insofar as they do not deal with gore or the supernatural, they do not trade in the squeamish but the real, the mundane, the anguish and the visceral trauma of human experience that is gruelling, terrifying and utterly compelling.  In this tradition, Eighth Grade is a superior slasher flick.

Eating a MacDonald’s meal is almost like eating real food: the fries approximate chips and the patties gesture somewhere towards the vicinity of meat. I don’t have a taste for it. With one or two exceptions, I don’t have a taste for horror films either. Yet Eighth Grade is a form of exquisitely sustained torture and although I found my eyes hiding behind their lids and my body cringing throughout, Kayla’s teenage pain is imparted sharply through every frame of this perceptive and insightful chronicle of adolescence.

With compulsive intimacy, the film unfolds as eighth grader Kayla navigates her way through one of life’s transitions, from middle school to high school. Her day to day existence scratches and bleeds, scabs over only to be picked at, then snags in the duvet just before it heals. Through Kayla’s travails we re-acquaint ourselves with humanity tender and raw, vulnerable and exposed. She is no victim, she’s determined – determined to make her own way, to find out what it’s all about and to discover who she is.  Contemporary chronicles of self-discovery and authenticity have come a long way since post-war Left Bank Parisian intellectualism: but Eighth Grade is no less profound.

Mediated by screens for so much of the time, Kayla’s physical, real life is visceral in its contrasting intensity. Our connection with Kayla is also mediated via her time on screens, depicted ingeniously by Burnham with much credit to the editing of Jennifer Lilly. But again, it’s when we see her beyond the white or blue hue of the screen glow that the deeper connection is made. The form of the film serves as an accurate analogue of Kayla’s life on and off screens. Time and again, we see her wide eyes peeping over her phone, her laptop, her duvet at her doting father, standing in the crack of the doorway.

After watching Barry Jenkins’ If Beale Street Could Talk (2018) at the turn of the year, I found myself captivated by the beautiful way in which his camera lingers on the faces of his actors, looking straight to the audience, often long after they stop speaking. The power of it. Something similar works here too. It took Eighth Grade to make me realise, through its ostensible treatment of the subject matter, that the power also comes from the sad fact that we simply look at each other’s faces relatively less frequently these days, so much so that the human face away from the downward bend over a screen, can seem starkly naked.

Throughout this delicate yet brutal film, it is clear that digital technology affords us opportunities to be closer, to communicate and express, to decrease loneliness…  yet somehow, in so many cases, it seems to amplify highly selective aspects of what it means to be human, often in a way that diminishes our collective experience. But Burnham offers no clichéd old man meditation on a younger generation.  Empathy is the strength of this film, personified by the patient and refreshingly non-judgemental father. Tech is not viewed solely through cynical, ageing eyes. Instead, we see how – the same as ever it was – tech is integrated into our lives.  We see how Kayla uses it and in navigating the unsavoury demands of others, we see how it uses them and her too.

There is a central scene in Eighth Grade where Kayla reluctantly arrives at the birthday pool party of a popular girl in her grade. Taking a deep breath, she slides the door open to join the carefree throng outside but the door will only partially open, forcing her to squeeze through uncomfortably into the sunshine, into the slow-mo, the close-ups, the splashing and the shades. This is a film for all of us who have squeezed through that partially open doorway, for those who are making that uncomfortable journey now and for those still too scared to step out of the shadows.