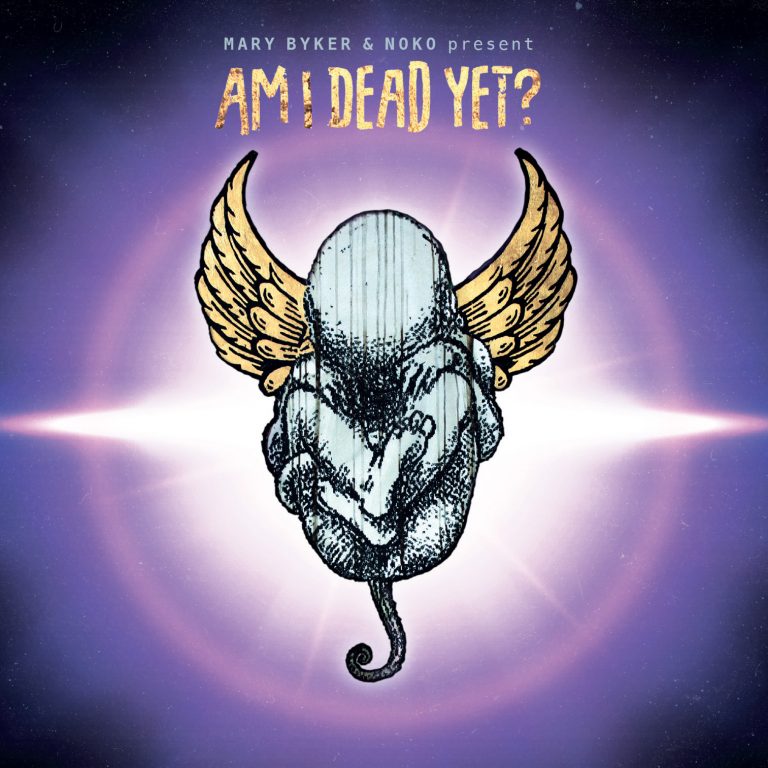 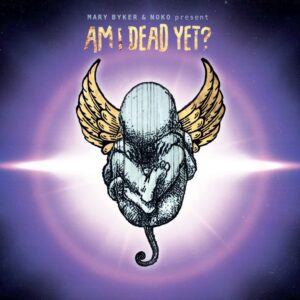 Mary Byker & Noko Present: Am I Dead Yet?  (wire-sound)

Two Apollo 440 astronauts, (a former Gaye Byker on Acid  and the guitarist with Luxuria & the reformation line up of Magazine)  make a stunning, cinematic, philosophical but tongue-in-cheek opus about love, life & death in the 21st Century technological maze.  Ged Babey is angry, ill, ugly as sin but very impressed as he asks himself Am I Dead Yet?

Do you remember the Sonic Stealth Orchestra remixes of various Manic Street Preachers singles circa ‘Everything Must Go’?  Well, that was Noko (and friends).

Do you remember Luxuria, and how, at the time, and even now, they were the greatest thing you had ever heard…?  Noko was the guitarist/co-writer with Devoto.

Gaye Bykers On Acid were a band who it was a lot of fun to be in, I imagine… But not much fun to actually listen to … They had a singer called Mary Mary (presumably he was quite contrary).  Decades on, after lots of shouting, gurgling and hollering… he has ‘discovered his voice’… and it’s a pleasant, if slightly sinister, velvety croon.

The soundscape is wide-screen retro-cinematic. The mood is distinctly glass-half-empty, with songs lamenting the failure of technology to save us from ourselves.  Mary singing over a lush Lynchian laptop orchestra, replete with the sweet vocal harmonies of Noko and the sumptuous twang of his vintage Gretsch White Falcon buried deep in a canyon of spring reverb.   It’s this shared love for the dramatic, the cinematic and the smell of the popcorn, that sets the tone for their new work together in Am I Dead Yet?

My Friends Are Dead.

(This is me,,,)  Imagine if Nick Cave wrote a Bond Theme…

This is the kind of thing you get with Am I Dead Yet?  Big, bold, cinematic maudlin crooning with a laptop orchestra and bongos. Phil Spector versus Joe Meek soundclashes with Neil Diamond on vocals …. Songs which are a profound and prophetic analysis of the human condition and the manners and etiquette of social media and its destruction of the Self…. only its a bit tongue in cheek and a bit knowingly cheesy, and it’s about an aesthetic, rather than being too pompous.

It’s a bit like an imagined Devoto in Vegas. If you know what I mean… or maybe that’s just me.

A quick track by track run down in case you are not already intrigued to the point of impulse-buy.

Leaving Me Behind
Slow and low. Whistling. Melodrama and crooning with twangy guitar reverberations.  The Bad Seeds play a Bond Theme in the style of the Walker Brothers.

Loneliness
A big ball of melodramatic cheese but fantastic nonetheless. Magazine- style bass-line, a stately pace… best lyric on the album – about being lonely in a cyber-crowd… big crescendo’s.

Solid Gone
Harpsichord and sweeping Manics type melody, Spanish guitar, a snaking synth and glam references: Grab yourself a souvenir-ir-ir-ir  from all your Golden Years – Marc Almond would be ideally suited to sing this.

Joe Meek Shall Inherit the Earth
Telstar stylophone, Twangy solo. Great musically – but lyrically a bit too obvious and references to ‘nuts in padded cells’ not particularly cool or sympathetic.

Ghosted
Spector Versus S.P.E.C.T.R.E with Sonic Stealth Strings.  Baudrillard Motown and could almost be a Devoto Song from Magic Murder or Jerky Versions.

Wasted On Me
A sinister waltz, Leonard Cohen meets Serge Gainsbourg Uptown. Some great lyrics about a females ‘cruel choreography’.

Futuristic Paranoia
Electronic warbles like a robot birdsong from the Far East. A  bossa nova nursery rhyme about cyber-paranoia. Sounds a bit Beast Box with added Beach Boys backing.  A massive hit in a parallel universe.

Master of Disguise
From slo-build to Overblown – I can imagine a Zombie Robbie Williams performing this to a mutant crowd and it going down well. Could be a hit for a boy band or J-pop  group. I Hate songs where the singer addresses the listener as ‘My friend’.

Fake Flowers
A love song to simulacra. Starts a bit Laibach.  Steals a vital chord-change from In The Ghetto.  Cheese, but  really great, delicious cheese. I lie on the ground and stare into Space, look at the stars form the shape of your face.

Thanks For Sharing
Clever stuff. A electronic mosquito flits in from a Morricone score, followed by a Mariachi trumpet.. Another Neil Diamond style epic.