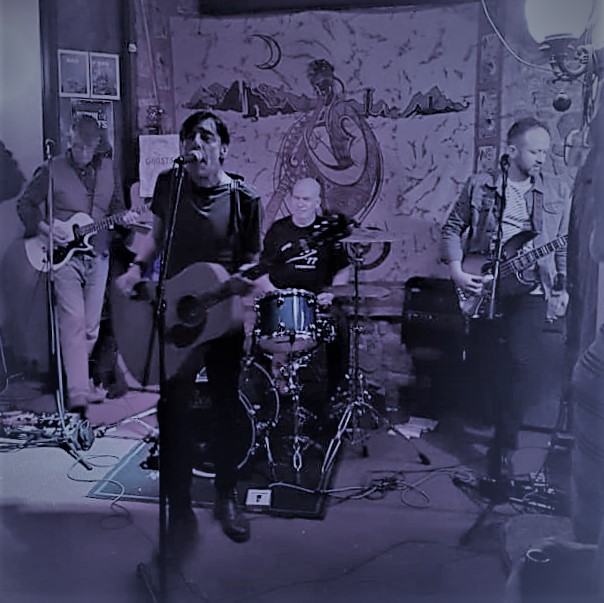 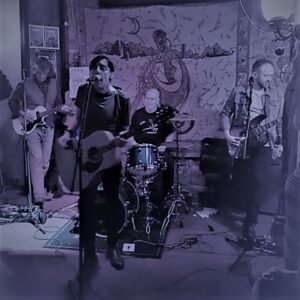 This was just perfect.  The venue, the band, the sound, the vibe… the crowd.  The stars aligned. Happenstance. Magic happened.

The Platform is a beards & real ale, rootsy music pub: blues and folk and jazz on the menu usually.  The clientele are older boho’s and younger hipsters – but it has a friendly vibe and is pretty-much a dickhead-free zone. Real-ale drinking, blues-loving social-workers and students sit on plush sofas quaffing and chatting. Being Christmas week I feared they may drown out the band… but they didn’t and seemed attentive and into-it after the first song.

I’ve been waiting to see Dumb Poets for a while now.  I reviewed their debut EP and their wonderful album, All the Ghosts, and have talked to two of them online.  Singer Lance Riley I knew of thirty years back when he was in the Spoons… he is shorter and skinnier than I imagined he would be, but has the louche demeanour of a proper rock-star-poet which I fully expected.

Drummer Joe Musker is a genuine legend. The Liverpudlian drummer with Dead Or Alive, Wah! Heat and others way back.  A thoroughly brilliant fellow full of scally charm who teaches drums to SEN kids.

Guitarist Harry Skinner and Bassist James Greenwood were busy with pedals and amps, but are two of the finest musicians you could hope to come across.

Two forty minute sets with a break showcased the whole of their recorded repertoire.

With hard-and-fast bands being my staple diet I have to say the light and mid-paced sound of the Dumb Poets came as a very welcome change.  They really are a great band with their own vibe which has a dozen influences but not one which dominates.  There are Byrds and Dylan-ish touches, a hint of Perrett magic and somehow a natural sounding mixture of Dire Straits and Suede ( Yep, you read that right… trad blues rock mixed with a sparkling steely glam-brit-pop) with an added light coating of psychedelia.

Wildflower, with its spot on harmonies owes something perhaps to REM,  Country Girl is a great piece of Country Rock, Heart Shudder is a gentle  psych waltz.  The Ceiling’s Crashing Down a Kinksy classic and Lotus On The Wire my personal favourite still.

There’s that glorious happy/sad, romantic feel about the songs that hark back to a time which we know, probably never really existed, except in the dope-smoke haze of late teenage or dramas about the sixties.

Skinners guitar really does weep and shimmer melody and Lance’s lyricism and distinctive voice is at the forefront.   For a band playing laid-back pub gigs they really have a captivating presence and sound and universal songs which are ready-made for big festival stages.

A great gig, which proved to me personally that sometimes melodic, classic songs and a relaxed performance can beat sheer energy and power-chords for satisfying the soul. It helped that Dumb Poets are the best ‘undiscovered’ band of their type in the UK I guess.

Photo cropped and coloured from a pic on the bands Facebook