Former Real Estate lead guitarist Matthew Mondanile’s band Ducktails have announced they are to release a new album and are to go on the road on a full world tour. 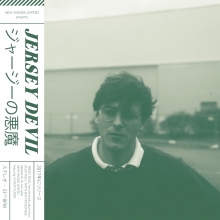 Matt Mondanile’s sixth full-length album as Ducktails, Jersey Devil, is a mature, multi-faceted work that emerged from the New Jersey musician’s return to his DIY roots. Drawing inspiration from diverse sources, including the cosmic jazz fusion of Haruomi Hosono, the LP showcases a huge leap forward in songwriting and production for Mondanile. The album is due Oct. 6 on Mondanile’s own New Images label. You can pre-order it here.

Jersey Devil was recorded over the span of two years despite frequently unfavorable circumstances. Mondanile started working on the record in Los Angeles prior to his departure from Real Estate, in a cramped, stuffy warehouse space he converted into a modest studio. A few good friends came to his aid: John Anderson (Girls, Sky Ferreira) and Malcolm Oliver Perkins both played guitar and helped to compose and produce the songs; Perkins and Samira Winter also sang beautiful harmonies while John da Costa contributed brilliant drum fills. Mondanile also flew over Chi Yoon Hae of the South Korean indie band Parasol to play bass.

However, the songs really became what Mondanile had envisioned after moving back to his hometown of Ridgewood, New Jersey, where he finished writing and recording the material in his mom’s basement. The quiet, familiar space surrounded by wood-paneled walls provided endless inspiration. Once finished tracking, Mondanile would take the commuter train to Hoboken, grab a cup of coffee from Dunkin Donuts, and mix the album with engineer Ernie Indradat at Sonic Youth’s Echo Canyon studio. “Everything felt right: the mini mall across the street, the stock brokers walking their dogs, and the sweet summer smell in the air” says Mondanile about the final days of work on Jersey Devil.