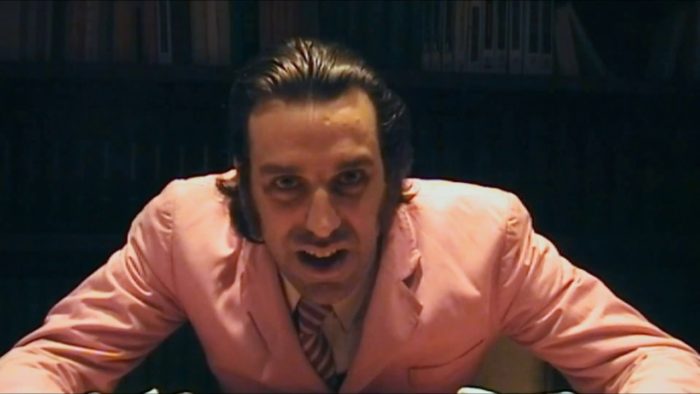 Doc’N Roll: Shut Up and Play the Piano

Lee Ashworth hangs on to his seat for a raucous, hilarious and insightful portrait of Chilly Gonzales, one of contemporary music’s most ferociously compelling characters, in Jedicke’s highly authentic documentary.

The crux of this dazzling and audacious film is a sequence central to both the identity of Chilly Gonzales and to the crazed narrative arc of this innovative and experimental documentary.  It is to Jedicke’s credit that he has crafted a film that eschews many of the cliches of the music bio, whilst honing a form imbued with its subject’s intensity and joie de vivre.  In terms of form and content, the result is stunningly complementary.

The central sequence is footage of a press conference in which Chilly Gonzales tears in half a diminutive Canadian flag to renounce his nationality.  Flanked either side by a muppet in a stove pipe hat, the impervious Peaches seated upon the desk like a latter-day Gala Dali, and a representative from the record company, Gonzales explodes into an unforgettable tirade after a seemingly innocent, yet boring question.  Berating his interlocutor for breaking the illusion, he rises to his feet and explodes like the most elaborate firework, exiting the room and eventually taking to the piano in one apparently spontaneous yet meticulously planned artistic event.  His voiceover mourns the fact that at this point he had “travelled too far” into the world of Peaches.  A change of direction was needed and as so often with Chilly, a new iteration of himself.

Unspooling either side of this pivotal moment, the Shut Up and Play the Piano chronicles his early apprenticeship in music through his grandfather, growing up in an extremely wealthy Canadian family of Jewish immigrants.  We see a photograph of his father standing between Clinton and Bush.  We see the the exterior of the house reflected in the ripples of the garden pool.  But this is not Chilly Gonzales, this is Jason Charles Beck.

We then see his gradual re-generation into his fiery future self, as he revels in the 90s Bo-ho of a musical collective riven through with coarse DIY musical ethics focusing on rap and performance alongside fellow fledgling creatives Peaches and Feist.  Leering into the camera – for this documentary is also a mash-up of lots of pre-existing footage – Gonzales or Beck or whomever he might be at this intersection, demands that in order to truly love him his audience must also learn to hate him.

We reel back and forth, take the blows and ascend the heights with Chilly.  Always, he is re-treading the footsteps of his father whom he claims arrived in Canada with nothing and was an entirely self-made man.  He appears to have reserves of creative fuel and the kind of infinite determination that serious space flight would depend on.  And without asking if you’ve packed a bag, he takes you on the journey, co-piloted by Jedicke and his accomplished sense of content and pace throughout.

From Canada to Germany to France and then Germany again, though this time Köln instead of Berlin, Chilly metamorphoses into something altogether even more remarkable and paradoxically original as he returns to the piano, to composition and playing and sight reading and slowing everything right down, stripping it all back.  As though parting the curtains that had shaded his stage for so long, he reveals the true magnitude of his newfound audience and truly takes off in terms of fame – and as he often comments upon – money.

This is bravura film making.  It is as much an interesting and inspiring piece of art as is the creation of Gonzales himself.  Reminiscent perhaps only of another classic documentary that explores creativity, authenticity and identity – Chris Smith’s incredible Jim & Andy: The Great Beyond (2017) – it is also a film about conviction and what it means to be unflinching.