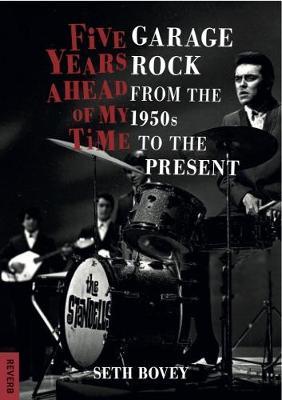 Five Years Ahead of My Time – Garage Rock From the 1950’s to the Present.
Seth Bovey
Reaktion Books
Available now

“Wow!” That is the instant reaction one feels when delving into this compelling history of the style of rock known as ‘Garage’. The further you become engrossed, the more you begin to comprehend the scale of the task that Seth Bovey has set himself and, crucially, the greater the number of unsung musical heroes who will emerge as the story of an essential part of rock music DNA is revealed.
Garage music has its roots at the end of the 1950’s and beginning of the 1960’s in America. Essentially the feral dangers of Rock ‘n’ Roll, a true revolution not understood today without full scrutiny, had been tamed by the music establishment. The US charts were full of schmaltzy ballads and new teen idols, offered up to replace the edgy sounds and menace of the sounds that had spread like wildfire through the late ‘50’s. However, across the continent, youngsters weren’t ready to wave goodbye to the phenomenon and still wanted to dance to “down and dirty” rock music. Enter the local heroes of Garage Music to dominate the live scene in their area and move the musical blood round provincial America.
These local bands, “living jukeboxes” as they were termed, provided the crucial element to the youth of America that was being denied by clean cut chart balladeers; quite simply it was the beat. The essential driver of all rock music, that enables the audience to engage and dance keeps the traditional twelve bar blues structure of African American Rhythm and Blues sound but with a simplified beat with accents on the second and fourth beats of each bar, driving audiences wild in the process.
This became “the beat heard around the world” as Bovey takes us on a staggering journey from Portland’s hugely influential The Kingsmen, whose recording of Louie Louie is one of the most important Garage records, and around America and the world. Bovey leaves no stone unturned and no garage unopened. So for every Electric Prunes and (sadly relevant this week) 13th Floor Elevators, we have joys like the Dutch band Outsiders and The Pleasure Seekers, Patti and Suzi Quattro’s all-girl group. All through, Bovey’s masterful overview highlights subtle changes in tone and rhythm of songs that have important influences. It’s a thorough and meticulous account but not to the exclusion of the non-musician.

The narrative reveals some great stories that any music fan will devour. Take Los Shakers, four young Uruguayans who inspired by watching A Hard Day’s Night, got themselves mop-tops, suits and invaded Argentina playing a selection of Beatles covers. They recorded Spanish versions of each new Beatles release and were rewarded by being chased everywhere by hordes of screaming girls. This led to Argentinian record companies signing up anything Uruguayan they could find in a Latin-American inversion of the British Invasion.
What is the essence of the Garage sound? Bovey sees it as essentially British R and B, but ramped up to the max, “played with such barely repressed fury and sung with such imperious swagger that they have a tense menacing tone”. Tracing this ethos through the revivalist movement of the ‘70’s with bands such as Oklahoma’s Debris or Detroit’s Up, seen by some as the real forefathers of Punk. Looking at the development of Punk in America, Bovey states that The Ramones and Devo could be called Garage as their members had no experience and met in their neighbourhoods to make some noise. Contrast this with a band like The Pretenders, whose members were seasoned musicians before joining, and you see the difference. By that definition, do we call The Clash a Garage Band or not? Answers on a postcard to John Robb at Louder Than War please!
Tracing the development right through to our era, Bovey recommends trying out Maggie’s Marshmallows from Prague who apparently look the part, not least as their drummer looks like a caveman. I really cannot recommend this book strongly enough; if you are interested at all in guitar music (and you are or why are you reading this), it is quite simply essential. It is an engrossing and exhaustive journey through the delicious underbelly of the evolving story of rock. It’s a must read for anyone who has seen a new or local band and wondered why they’re not bigger, or how they fit into the wider tapestry of rock music. It’s a painstakingly researched and stunningly delivered shout out to the underdogs of musical history and you really need a copy.

For more information, please visit www.reaktionbooks.co.uk
All words by Dave Jennings. More from Dave can be found by checking out his Louder Than War Author Archive. He is also on Twitter as @blackfoxwrexham