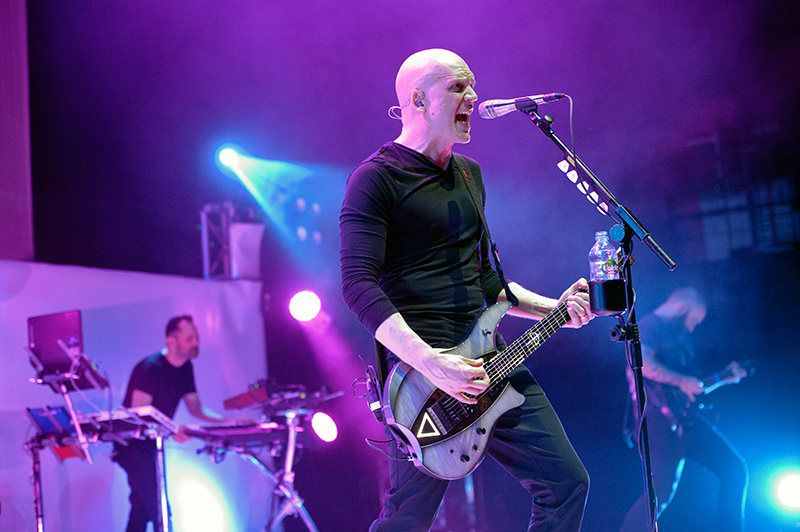 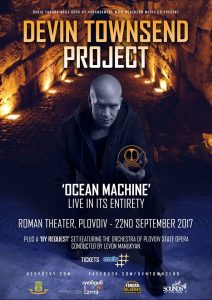 The penultimate date of Devin Townsend Project’s recent UK tour was no ordinary show. It was a twentieth anniversary celebration of Ocean Machine, the album that kickstarted the Canadian’s career and is named by many long-time fans as his finest work. Nick Holmes was amongst those swept along.

There was a definite sense of occasion on a chilly Friday night in south London as thousands of people descended on Hammersmith’s legendary Apollo. Some had been queueing all day long to bag a prime spot when the doors opened and many had their wallets ready. Devin Townsend is well-known for thoughtfully constructed merchandise and within an hour of the doors opening eager punters had cleared the lobby stall of limited edition Ocean Machine t-shirts and patches. Why? Because said opus is arguably one of the most powerfully emotive musical works of the last two decades and it has been a key part of the soundtrack to their lives.

As the anticipation built and St Patrick’s Day pints were downed Norwegian band Leprous took to a stage cluttered with three drum kits and assorted other instruments. Despite the confines imposed upon them they burst into a short energetic set that sounded mighty in one of rock’s iconic venues. A mix of crushing riffs, earth-shaking bass and electronica, tracks including The Price, Rewind and closer Slave won a great response and they are certainly potential headliners of the future.

Britain’s own TesseracT were equally impressive. With a striking Tron-like ‘tesseract’ cube backdrop and under moody lighting they delivered a powerful set that featured Dystopia, Hexes and Survival. Vocalist Daniel Tompkins became increasingly excitable and told the crowd, “What an amazing sight. I am never going to forget this. It’s beautiful!” He and his band also seem on an upward trajectory.

In 1993 a precociously talented dude from Vancouver fronted the band of a guitar god at this very theatre. That wide-eyed awkward 20-year-old was Devin Townsend, singing for Steve Vai on the Sex & Religion tour. Even back then Devin had been demoing songs for what would become a landmark in his career. After leaving Vai’s tutelage and a brief chaotic stint with Brit-rock reprobates The Wildhearts, Townsend formed raging metallers Strapping Young Lad. He also wanted to launch a true labour of love into the world. A tortuous and drawn out recording process – not to mention an almost farcical mixing trip to Spain – resulted in an album that no record labels were bothered with. Instead of shelving it and with the loyal support of his wife, now also his manager, Devin launched his own label. To this day Hevy Devy Records independently releases his work under licence and he has established himself as one of the most respected singers, guitarists, songwriters and producers of his generation.

Fast forward almost a quarter of a century and tonight Devin Townsend’s own name was emblazoned on the front of the Apollo, just as his mentor (and still close friend) Vai’s had been all those years ago. As the man and his band arrived onstage a deafening roar greeted him like a hero returning from the battlefield. Ever self-deprecating, Devin asked “Are you going to help me tonight, everybody? Are you ready?” As the unmistakeable rumble of Seventh Wave rolled across the room the floor began to bounce, with the band bathed in blue and a backdrop of a moving sea. No further encouragement was needed for the crowd to noisily sing words telling of cowardice versus courage, flight versus flight. That is the key to this album. Despite many songs being written while Townsend was in his teens and early 20s, there was a sense of an old head on young shoulders. Something that clearly connects him with many thousands of fans then and now.

The moods and textures of the album are what make it so special. Life, a warm sonic group hug of cascading riffs and chiming melodies with lyrics espousing self-acceptance and self-determination. Night and Hide Nowhere, heavy duty musical and lyrical whirlpools of self-doubt and self-loathing. The pause for thought of acoustic Sister with its repeated line, “There’s nothing I can say…” leading to the sound of various conversations drifting in and out while ambient sounds pass and Devin states gently, “time will be on my side, no looking back this time.”

This marked a noticeable turning point. As the undulating tune of Voices In The Fan kicked in both frontman and fans became noticeably emotional. As Devin screamed the verses and soothed on the chorus hands were clasped in the air, people hugged their neighbours and many a burly bearded bloke wept into his beer. A radio-friendly rolling sound almost mask dark lyrics telling of someone pondering mortality and whether there is any point in carrying on. Everybody present knew every word and more than likely identified at some point in their own life with the sentiments.

A Vai-esque guitar lead heralded the raucous cacophony of Greetings, which with hindsight served as a template for various later works of the DTP albums. Heavy crunching Regulator had fists pumping and heads banging, again showing itself as a pre-cursor to Devin’s more recent output. The mood swung once again with the repeated riff and ambient sound effects of Funeral. As the beat kicked in and another soaring guitar line Steve Vai would be proud of echoed around Townsend and his extended family welled up. The song was inspired by the murder of a childhood friend, A deeply personal horror explained in a way that anybody who has experienced the cold hard fact of loss can identify with. It was deeply affecting.

The rage subsided to the sound of seagulls and ambience before a further plunge into the depths. A jarring, juddering riff reminiscent of Pink Floyd’s Sorrow thundered away on 10-minute nihilistic epic Bastard. Further snippets of conversations, apparently from therapy sessions or similar, could be heard heralding the Gary Numan-esque keyboard wash of The Death Of Music. Again Devin became visibly emotional singing “Don’t die on me, don’t go away, when I need you here…” Arms swayed and again complete strangers hugged the person next to them as lullaby-like Thing Beyond Things, the album’s final track, completed the set. Devin’s ear-shredding scream, just as on the album, underlined it was time to dab eyes and breathe. As he paused to compose himself the crowd roared effusive approval. But the night was not done yet.

“Thank you for the support over so many years,” said a visibly moved Townsend. “We need the toilet!” One very quick leak later the band returned and their erstwhile leader had more to say. “Twenty years of this fucking thing (Ocean Machine)! Holy fuck! How did we do that? For the first time ever!” He introduced his long-time lieutenants, Dave on guitar, bass player Beav, Ryan on drums and keyboard/lights man Mike. “Wow! We are still doing this shit!” he exclaimed, adding “Hey! I’m Dev! This came out last year!” Things were brought bang up to date as they played an encore of three tunes from most recent album Transcendence.

Failure, Stormbending and Higher all showed clear roots in the sound Ocean Machine had created two decades earlier. The work of an artist constantly tinkering with and exploring what can be done within his abilities. “I’m gonna home and stare at a wall for two weeks!” he laughed. “Nah! Three days and I will be bored and start doing some other shit! Don’t let the bad dudes grind you down. Goodnight!” As soft ambient music played Devin applauded audience, the band gave out setlists and Ryan threw his sticks out before asking the crowd to salute for selfies.

The unmistakeable voice of Frank Sinatra on the jazzy swing of Beyond The Sea soundtracked several thousand happy sailors who had ridden the ups and downs of turbulent emotional waters stirred up by arguably one of the greatest and most emotive musicians around right now. Prolific and prodigious, perfecting and perplexing, profound… and poop-obsessed, that sums up the electrifying enigma that is Devin Garrett Townsend. Hopefully there will be many more creative voyages to follow this maverick captain on, whether it be with the good ship DTP or other vessels. Don’t be a landlubber, jump aboard!

Ticket details for all dates are here.

All words by Nick Holmes.

February 6, 2015
We use cookies to ensure that we give you the best experience on our website. If you continue to use this site we will assume that you are happy with it.Ok