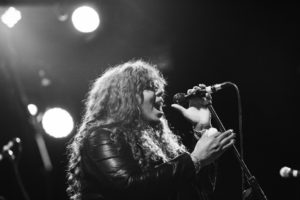 Denise Johnson releases her version of the New Order Song True Faith ahead of the release of her eagerly anticipated album.

For many fans, the release of Denise Johnson’s solo work has been a long time coming. True Faith is the second single released in the lead-up to her album due in the summer. It follows on from her well-received first single I’m Not In Love. Although Denise manages to convey the often heart-rending emotions described in the lyrical content, her voice remains luxuriant, even on these songs which have been stripped back to their essence.

Picking a New Order track, True Faith, to perform acoustically is a brave move, but Denise Johnson has no qualms about working with challenging material and making it her own. The pared-down approach on her recent releases, with only some superb guitar work from Thom Twemlow, or Twem as he is known, to compliment her stunning voice, works perfectly. There is a poignant air about this rendition of True Faith that works well. Although her voice retains its rich tonal quality, there is an underlying bleakness. The sadness and soul-searching implied by the lyrics are delivered perfectly.

From the first moody guitars, the track has a fragile beauty. The minimal soft backing voices are almost wraith-like. Occasional mirroring of lead vocal give definition to important phrases, and where Denise’s voice stands alone the emotion feels particularly raw. Possibly this is a particular favourite of the singer that makes it easier for her to draw so much from the material. Although probably most famous for her work with Primal Scream, Denise Johnson has worked with New Order, as well as other Mancunian bands such as A Certain Ratio. Proud of her Manchester heritage, it seems fitting that she has made a success of covering such an iconic track from her home city.