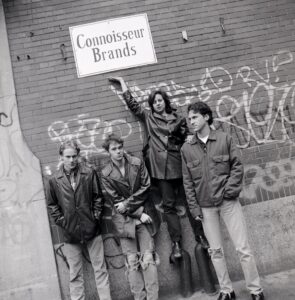 The album features rare material that was recorded during John Peel sessions in 1992 and 1993.

A Boston-based four-piece Come formed in 1990. The band’s to-be guitarist Chris Brokaw played the drums with Codeine, while another founding member Thalia Zelek was in no wave-influenced Live Skull. Following the release of their debut album 11:11 in 1992, the band went on a tour in Europe. While in London, they recorded a session at Maida Vale studios for John Peel’s show.

Shortly before Don’t Ask Don’t Tell, their 1994 second album, the four came back to the UK and did another session for Peel. This included some of the material from the upcoming record and two cover versions – Loin of the Surf by Swell Maps and Adult Books by American alternative rockers X.

The new compilation will include recordings from both sessions, some of which have never been released before. With a maelstrom of ringing guitars and dark folky tunes, familiar from the original album takes, these live versions emphasize the haunting quality of their songs. Favourites of Kurt Cobain, the band created bewitching music that was described by Uncut as “crushingly heavy blues, a bleak beauty”.

Come ‘Peel Sessions’ will be released in February 2022. The album can be pre-ordered via Fire Records.