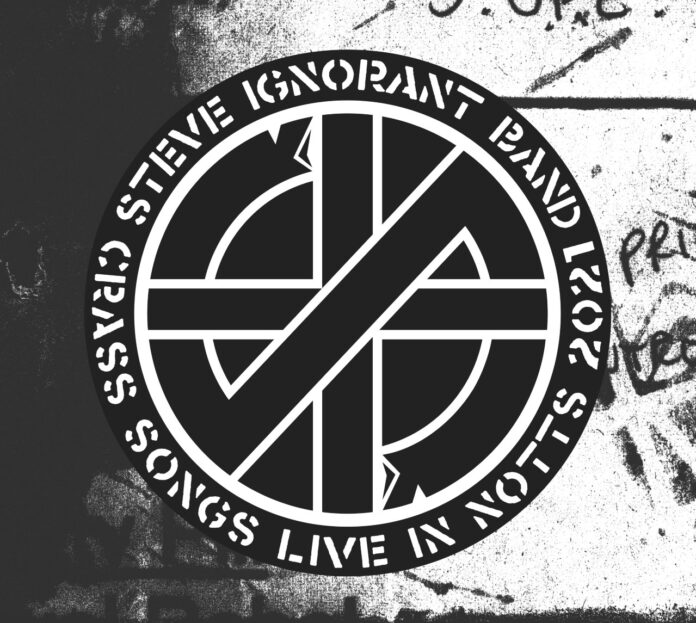 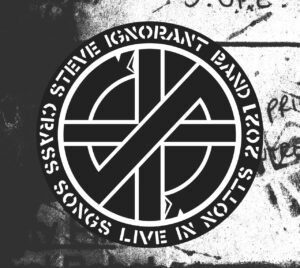 DL only – the limited edition CD has sold out. There are plans for vinyl in 2022.

What it says on the tin. A raw, ragged but quite incredible performance. The same members as Slice Of Life but this is Crass songs given a new lease of life says Ged Babey.

This sounds like it is a life-affirming album made up of life-changing songs. The Crass back-catalogue performed one-last-time…

This is not really a review because I haven’t heard the whole album. The CD sold out so quickly (and I don’t use Spotify and streaming gives just clips…) I had seen a piece of video from the gig (which is below)… and that was enough… Enough to know that this is a very worthwhile release… and then on Xmas Eve Steve put up a 24 minute edit of video of the show…

But first here are the facts…

On Friday 24th September 2021 the Steve Ignorant Band made their debut live performance at the Old Coal Store in Nottingham. The pandemic had meant that the band couldn’t meet to perform so all rehearsals were conducted via Zoom, so the purpose of this show was to act as a live rehearsal in front of a small audience before performing to a much larger audience the following night at North East Calling in Newcastle-upon-Tyne. Other shows were planned but lockdown restrictions had resulted in these being re-arranged several times and delayed until 2022. The show was recorded and the band were so pleased with the performance that they decided to release it. The full set, 25 songs, all on this CD with no overdubs etc. comprised entirely of Crass songs from the early part of their career.

Beautifully filmed. Capturing the audience, crew, band in stark monochrome.  Smiles, laughter, beer, Steve rolling a fag… and the performance, the dancing… With no disrespect meant to Steve and the rest of the band, Carol Hodge emerges as ‘the star’. She inhabits the songs so fully that during Shaved Women she is so overcome that she cries and has to stop singing. She steps back from the mic and just mouths ‘Screaming babies, screaming babies’, before. arching her back like a cat, going back to the microphone to sing ‘In all your decadence people die’… her voices cracks and eyes are streaming… it’s painful to watch, but an incredible powerful performance.

Here is another view from the audience. You can see sweat-soaked bassist Pete is aware of Carols distress whilst Steve seems oblivious.

It is an astounding performance and the emotion captured on video. Hodge looks like an Amazonian warrior with her tattooed arms and posture. A picture of defiance and strength… until the emotion took over.

On her Facebook page before the video came out Carol had said of the album and gig: This was a super-emotional experience.. You can hear my voice give out during the outro to Shaved Women as I sobbed like a baby. I’m really glad this first gig was captured for posterity. Hope I get to play with my brothers again soon.

Steve hollers himself hoarse and seems tense onstage. During Systematic Death he looks over-awed by the sound of his own band, live and loud for the first time for ages.

Mother Earth from Stations of the Crass sounds as visceral and disturbing as it did the first time I heard it. Not that it’s a song I have revisited very often.

It’s great to hear Steve singing songs like Big A, Little A again though – due to the fact that the 13 Crass Songs Jeffery Lewis covered had become the versions lodged in my memory more than the originals.

I’m going to have to download the full album, as it really does seem to be fantastic as a performance and a recording.

Is it just pure nostalgia? Young cynics may ask. Fuck, no I’d say.  Nostalgia would be crass. And this is the Steve Ignorant Band 2021.  There is no ‘going thru the motions’, no ‘You might remember this one..’ intro’s. And the blood (coursing thru their veins) sweat (dripping onto the stage) and tears (running down the co-vocalists face) are very real. This is authentic looking back in anger….

Download/Stream Live In Notts from