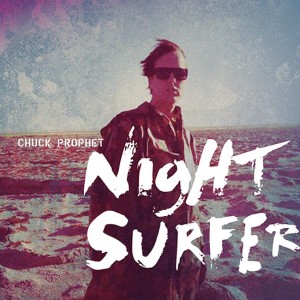 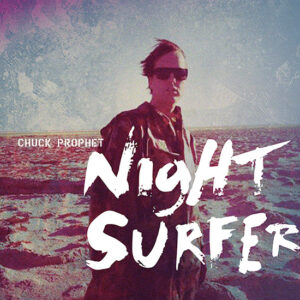 My caffeine levels are low, I don’t drink alcohol or eat red meat and my middle name is ‘sensible’. So trust me when I say in all seriousness that Chuck Prophet (other than Strummer and Springsteen) is the best guitar front man I’ve seen. Add in Buddy Holly and Roy Loney and you get an idea of how his live shows coalesce around a personality and an electric guitar that leaves his disciples dumbfounded that he remains so under the radar. With Dan Stuart in Green On Red, he was as responsible as anyone for laying the mid-80s foundations of what we now know as modern Americana.

I first saw him in 2009 at the bedraggled New Roscoe in Leeds, when the ancient pewter tankards shook above the bar and he played for over two hours as though his life depended on it. Legendary local promoter John Keenan was on the door, passionately persuading passers by to give it a go. As well as the amazing masterclass in guitar virtuosity, I was immediately converted by a show shot through with humour and self-deprecation.  I’ve seen him half a dozen times since and what you see is what you get, the new songs fitting snugly against the old and his choice of covers is always spot on (Shake Some Action, For You, Dollar Bill Blues, Sorrow) but most of all, boy can he play [the] guitar.

Prophet’s prolific gigging is matched by his recorded output and Night Surfer is his thirteenth solo album. Across twelve tracks, the album achieves a remarkable consistency, with hooks, choruses and layered guitars constructed for the radio and the soft-top car and which unashamedly take aim at the brain’s aurally addicted synapses.

Whereas his previous LP – 2012’s Temple Beautiful – acted as a musical rough guide to his home city of San Francisco, Night Surfer seems to take inspiration from random underdog characters. He seems like a songwriter who walks out of his front door with nothing more than an open mind, ready to take inspiration from whatever he sees. Nothing startling about that, of course, except he has the knack of setting these stories to moreish melodies that defy resistance.

He’s a keen historian, channelling his life experiences into a contemporary wisdom neither mawkish or lecturing. Prophet is a singularly personal writer, aware of his lineage in the roots of modern American music and whose grasp of the pop, punk, country and rock’n’roll influences that brought him to this place means that he’s comfortably able to straddle the old and the new.

Chuck’s lived a bit, and he’s keen to make good the past as best he can. They Don’t Know About Me And You reflects on paternal and maternal memories, but the nostalgia is turned into a positive acceptance of the here and now, good and bad.

Laughing On The Inside tells us how “The river of life/ Changes course every morning”. These vaguely spiritual thoughts are further elevated by call and response vocals and swelling strings that leave us in no doubt how damn good he feels to be alive.

Wish Me Luck and Lonely Desolation are power pop vignettes that pack the kind of killer lyrics that Prophet’s hero Alex Chilton would undoubtedly endorse, the latter benefiting from subtle and imaginative orchestration that’s nailed down by a subterranean riff that adds ballast to an unashamedly commercial melody.

Wish Me Luck (“My life is an experiment/ That doesn’t prove a thing”) is built for his live shows, a lush cascade of guitars and strings with a confessional, tongue-in-cheek chorus that will have his audiences yelling the lyrics back at him. (I think it ends on the same note as Blondie’s ‘…Presence, Dear’ but without the distinctive final acoustic strum).

Guilty as a senator/ Guilty as a judge/ Sorry I couldn’t be/ The man I never was” (Guilty As A Saint) is as near as we get to one dimensional regret, an emotion that Prophet’s bloodhound voice wrings every last nuance out of. It’s song writing devoid of ego and the confessional is powerful.

The arc of the album means that cherry picking tracks is counter productive. Night Surfer picks up its pace towards the middle and then swaggers out with the cataclysmic glam rock beat of Love Is The Only Thing, which MUST have been considered as the title track. The song ends in a squall of strings, a dimension which has clearly energised Prophet to build songs of subtlety and quiet power.

Peter Buck’s guitar emerges with repeated listens, the Paisley 12-string jangle adding a depth and a dimension to the luxurious production. That the paths of REM and Green On Red must have regularly crossed down the years neatly squares a circle.

The drums pound (this is a great drumming album) and despite the avalanche of guitars the songs are allowed to breathe. I can hear them in acoustic arrangements already, and Prophet has recently toured with a full string ensemble.

So Chuck Prophet and the Mission Express live? I can’t wait to hear these songs in the flesh. I’ll be with him at least twice in October and they are guaranteed to be the gigs of the year. If you can get down (dates are on his web link below) then arrive early to see Jonah Tolchin, a real star in the making, open his UK and some of the European shows.

All words by Steve Swift, find him on Twitter and his Louder Than War writing here.