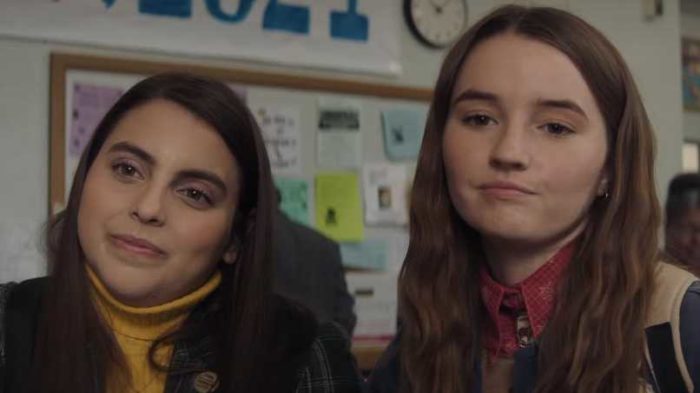 Out now on general release and showing at Home, Manchester

Director Olivia Wilde has crafted a hugely entertaining film that deserves the widest audience – for those who can keep up with the pace.

In Booksmart, the debut feature of actor and activist Olivia Wilde, an overheard conversation leads soulmates Amy (Dever) and Molly (Feldstein) to arrive at the sudden and shocking revelation that their exclusively studious preoccupations have been at the expense of having none of the fun their classmates have enjoyed. Molly sets out to redress the balance on the night of high school graduation, plunging wholeheartedly into the party spirit, with Amy a more reluctant convert by her side.

From the first to the final frame, Booksmart is funny.  Packed with one-liners and infused with sharp dialogue, the film captures and harnesses the urgent engine of adolescence, burning up shameful situations and the blind fumbling for one’s own personal boundaries for fuel.  Ignited by the authentic and perhaps enviable chemistry of the two leads, here is a film that uses every cliche of the teen movie as touchstones – even the notion of ‘the teen movie’ – then treats them as stepping stones, passing over them, transcending the bones of the genre for something fresher and more wide-reaching in scope.

Transcendence is highly apposite here – everything one might say about Booksmart is true, yet by no means sufficient to offer a taste of the film itself.  It’s a teen movie: yet arguably it is perhaps just as much about teens as it is for them as an audience.  It’s a comedy: undeniably, hilariously so and with elements of gross-out too… yet almost any previous teen comedies or college-based comedies that come to mind do not sit well alongside Booksmart.

The most obvious key to Booksmart’s subversions of cinematic traditions lies in its female core.  Female director, female leads and a predominantly female cast.  In terms of roles, notions of agency and narrative trajectory, Booksmart bucks all the old skool trends and leaves the audience feeling that just like the main characters, we are hurtling into the future, chasing horizons, rather than retreading the tired twentieth century tropes of the bawdy boys with the tender undersides or the alienated loner, ostracised but misunderstood and underrated.  Booksmart will make you excited at the possibility of being young again and for a hundred and two minutes at least, you will be.

It is no criticism of the film that as fresh and refreshing as it is, it undoubtedly takes its place in a new tradition of cinema united by its female orientation and by its presentation of female perspectives.  Arguably, some of the greatest, most memorable and also most broadly entertaining films of recent years constitute this growing pantheon.  Films such as Ladybird and Eighth Grade come to mind and it is notable that all three of these focus on key moments of transition in the lives of young women.  It is an incomprehensible travesty that such perspectives, characters and stories have been marginalised at best for so long, yet at the same time it is truly something to see the lives of more ordinary young women burn up the screen in more mainstream cinema.

It is difficult – only by dint of release date perhaps – not to see Booksmart as a kind of decadent companion piece to the more serious, meditative (though no less entertaining) Eighth Grade.  And here too, we have characters arriving in slo-mo and a soundtrack that bursts into the foreground obliterating everything else in the intensity of the moment.  In common with Ladybird too, as well as Eighth Grade, there are key scenes in or around a pool.  To what extent is the pool a synecdoche of a strata of American society?  All these films play with contrasts of surfaces – the brash exteriors of the characters and their deeper, more hidden interiors; the high volume of chatter and music above the water and the insulating privacy below, where the viewer empathises with protagonists’ retreat into observing the world unseen, snatching a brief moment of their own true identity amongst the melee.

Booksmart fires on every level.  The wider cast is terrific and with every moment of the film you want more of their individual performances – each character is fully formed, prepared for his or her own spin-off series.  Gigi (Lourd) is particularly compelling, popping up unexpectedly in scene after scene with hilarious effect.  My only reservation is for an ill-judged side plot following the relations between a high school teacher and pupil that doesn’t fit with the tone of the film – though even this, inconsequential though it is, is played beautifully by the actors involved.

And of course, Beanie Feldstein alone is possibly reason enough to see this film.  Everyone needs to get Booksmart now.

You can watch the trailer for Booksmart here:

You can find Booksmart here.