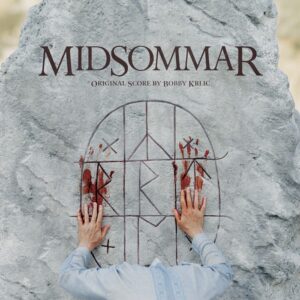 According to the press release and the trailers, Midsommar is a folk-horror akin to the Wicker Man (as you can tell I have not been able to get to the cinema just yet to catch it) and it was this description that truly caught my attention as that genre of cinema and what Krlic’s output has been to date seemed like an interesting combination. Would Krlic use his familiar sonic palette or would he change his style to incorporate more noir-folk elements? Well the answer falls right in the middle.

For this score, Krlic utilises more strings than on his previous recordings but manages wonderfully to balance the beauty with his deeper atmospherics. He also manages to wring every emotion out of the listener making this one of his most balanced and complete works to date. Tracks such as The Blessing and Prophesy invoke a duality within the listener. These tracks are so beautiful and serene yet……there is still a darkness that hangs around the edges.

Like a highly skilled painter, Krlic manages to make pieces of music that have many layers with a central piece of instrumentation driving the track along whilst other elements help create a framework that blurs at the borders. Listen to Gassed. Here we have a piece that allows a Celtic string element to swing and weep whilst around it slabs of percussion eventually make their presence felt, quickening the pulse and injecting you with a sense of high anxiety.

It is the word anxiety that best sums up this score for even during its most tranquil moments Krlic throws plenty of creeping dread into the music. Attestupan has a core element of (distant) light yet the strings and synths try their best to bury it whilst A Language Of Sex manages to make the act of shagging one of the most terrifying things a human can do as he layers on multiple human voices creating a sound that is equal amounts ecstasy and torture.

This is a wonderful score. Bobby Krlic has made a piece of cinematic art that pricks at every human emotion. Midsommar is disturbing, tear-jerking, euphoria inducing and gut wrenching. If you are of a nervous disposition then please feel free to listen with the lights on but be warned for where there is light there is shadow and in the shadows is where Krlic places your deepest most fears. A thrilling ride.