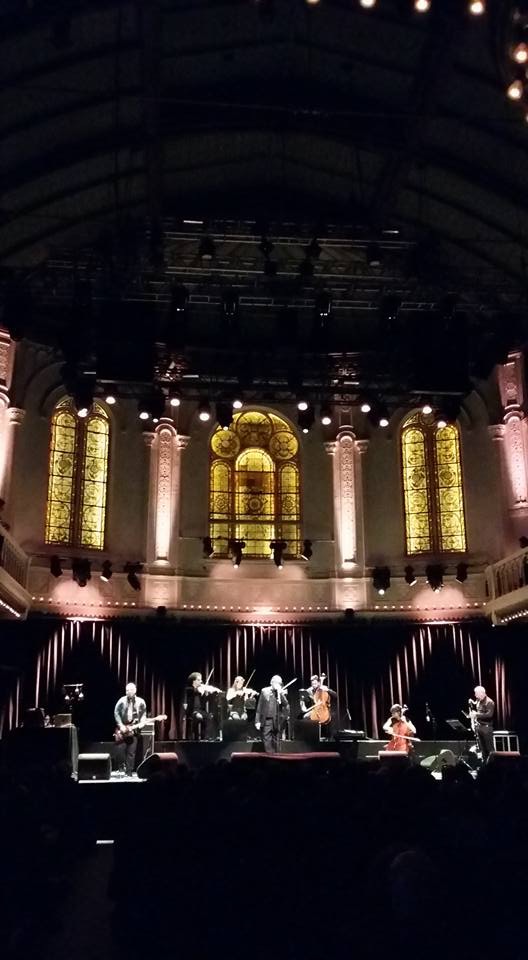 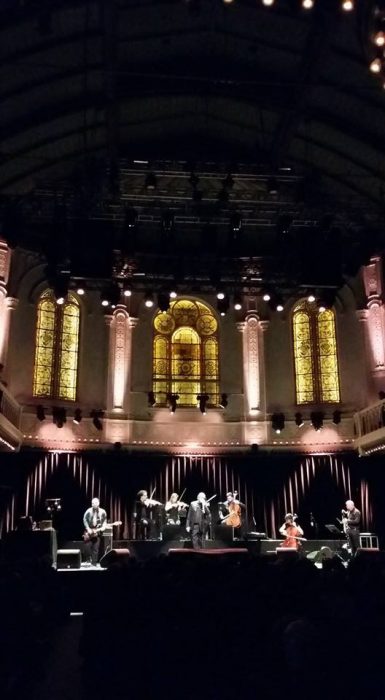 With an added local string section that they hire in and rehearse before the concert every night and a cello player and bass …. The pair of them are weaving spells and creating atmospheres that are both timeless, quixotic and laced with a dark humour and poetic edge played with a theatrical flare and sense of the frame and space of soundscape.

Bargeld has been mining this faultline for years since he famously appeared out the post punk Berlin as the skeletal youth with a band of droogs who used the local scrapyard for musical instruments and created a music that was thrillingly boundary breaking as it was both violent and beautiful. These days he carries the wisdom of age as he laconically dispatches his observational and ever packed with twists and turns of unconventional ideas lyrics.

He still employs that inward scream now and then but most of the vocals are crooned Ina voice stained with wisdom and time as he creates the perfect foil to the amiable stage presence of Teho Teardro who beautific smile is of a man lost in the music that he is creating. Armed mainly with his baritone guitar and a pedal board creativity loops, delays and echoes he plays the sonorous bass lines or dark lead twangs with a mixture of E Bows, a small wooden mallet or his fingers whilst somehow also conducting the string section or dealing with the percussion supplied on a laptop or finding time to chime the bells hanging front stage.

They play the wonderful Quiet Life – the song that brought their writing partnership together in the first place and as it gently chugs away with its sinister undertow it remains their most conventional piece as the other songs and pieces subtly employ those twists and turns and brilliant ideas that have punctuated Neubauten’s parallel career for decades.

If that band was built around its percussive ideas this a gentler but still engrossing pairing. Their first album, Still Smiling, was built around the emotional power and soundscape seduction of strings whilst the second album around the more unconventional useage of wind instruments. Each piece is a wonderful island of its own sound, a mini masterpiece of a world that pulls you in and hypnotizes you with its sound and feel, a mini symphony of atmosphere and a vignette of rare beauty.

Their cover of Crimson and Clover impecably sung in Italian by the multi lingual Bargeld is proof that the besuited singer still has the ear for an unconventional and stark and telling cover like the celebration of Lee Hazelwood’s Sand from back in the noisy early days of Neubauten. This multi lingual delivery is key with German and Italian joint the snatches of English in creating a celebration of the power of words and the nuances of meaning and sound created by the many tongues.

Their own Come Up and See Me has all the atmosphere of the old Europe and as the strings seethe and the atmosphere is constructed it has the dust and charm and deep intellectual yearning, sonic seduction and playfulness of another world, another music of a different continent that is far away from the bluster and monolithic, look at me, of post American empire rock culture. This is a a perfect fusion of modern electronics, experimental nimble minds and classic tradition sieved through darkly playful minds. Sinister melodies and moments of great beauty slip and slide past as you are transfixed by atmosphere and possibility.

As Teho conjures up some more magic from his corner of the stage, Bargeld stands their imperious- the dark emperor of sound enjoying a surprisingly easy transfer of the ‘destroyed ‘ Blixa, as Nick Cave famously called him after he first saw him play on TV whilst in Amsterdam decades ago and into the older age without losing any of his intellectual fire or acidic edge that embraces us all if we are lucky.

Charmingly original and operating beyond the circus this pairing work well beyond dull concepts like time and fashion and create a timeless world to get lost in and a music that stays with you long after their concert.