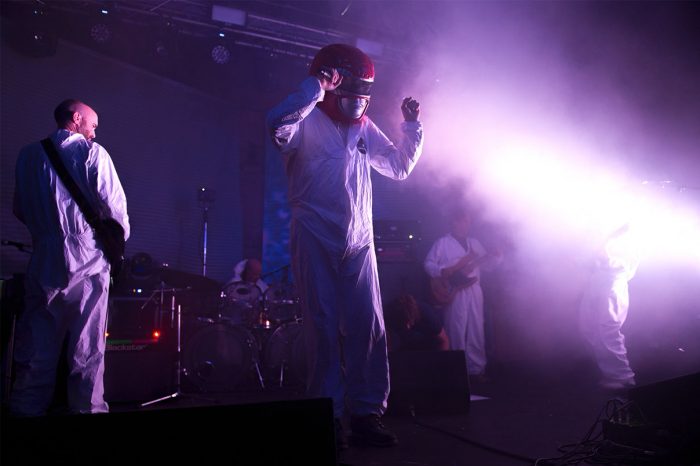 Louder Than War sent Roxy Gillespie and Melanie Smith to paint a picture in photos and words to capture the spirit and ethos of Liverpool International Festival of Psychedelia. This is their account of the niche festival that won the NME award for best small festival in 2014. Does the festival live up to its reputation? Here is what they found..

Day one at Liverpool Festival of Psychedelia started with an excellent set by Deja Vega at The Blade Factory. The set almost blew the roof off. It was superb throughout, cementing the band’s growing reputation. One of the best performances of day one.

The Hanging Stars were a completely different proposition, dreamy and ambient, they filled the stage at Furnace with a more classic type of psychedelia. 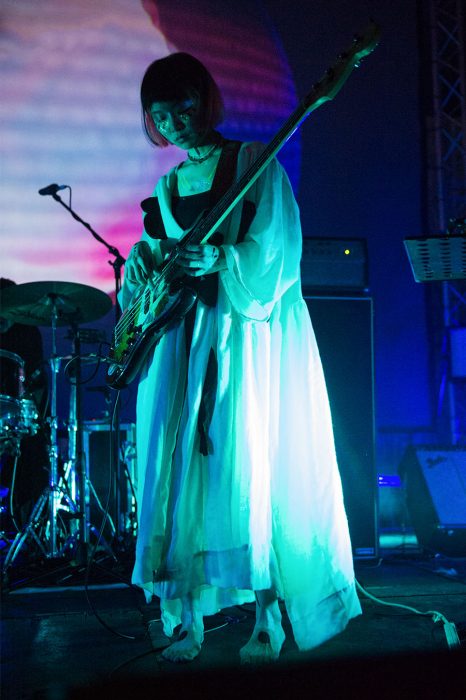 Camp was throwing out some great sounds. The murky atmosphere, minimally lit by giant screens was perfect. The music included the hypnotic drums and crescendos of sound from Prairie WWWW (pic right) to a more repetitive motif and 60s vibe from Minami Deutsch.

La Luz provided some excellent surf on the Furnace stage, with lush guitars and keyboards to back up the vocals. The crowd seemed to love the up-beat set.

District hosted That Fucking Tank and the Fete Souterraine curation, which included sets by The Veldt and Flamingods, playing to a packed venue.

As the day went on the upstairs space holding the gallery and the cinema filled with people wanting their own virtual reality fix. The installations and virtual reality headsets moved them beyond the brutal brick and concrete of the physical space. With its own bar area and an excellent festival record store provided by the staff at Dig Vinyl, this was a great place to see what Liverpool Psych Fest had to offer away from the stages. 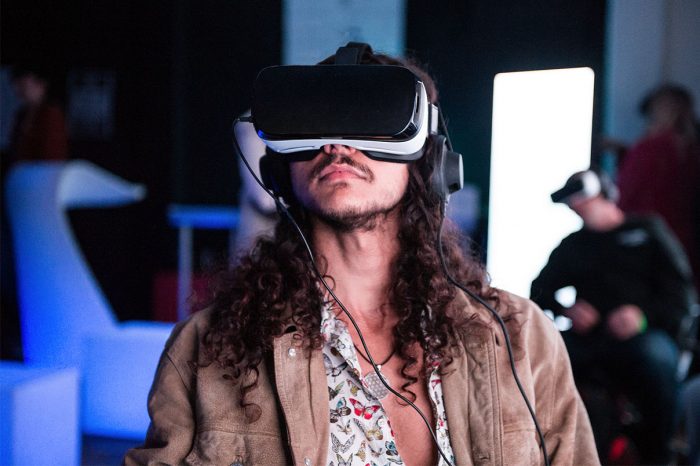 Josephin Ohrn and The Liberation had a prog ambient feel that went down very well with the crowd at Furnace. They were followed by Gwenno providing the growing crowd with outstanding electronic psych. The music was beautiful and otherworldly with luxuriant keyboards. The vocals were sublime and poured over the music like water  from a crisp, clear mountain spring.

Headliners of the Furnace stage, Super Furry Animals, had an ever-growing crowd waiting patiently to catch their set. Dressed in white boiler suits, the band hardly needed their audience cards. The fans were going to go APE SHIT anyway. The set went from strength to strength, with hits such as ‘Man Don’t Give a Fuck’ wowing the crowd. A suitably spectacular way to end the music on the Furnace stage.

The atmosphere continued to hold the chilled vibe and the music went on in the PYZK Colony at Camp until 4am. Bands including Gnoomes and Silver Apples performed on stage. Electronic masters Demdike Stare and DJ Steve Davis kept the vibes cool into the early hours.

Saturday was cooler weather-wise, but the mood at the Liverpool Festival of Psychedelia site remained enthusiastic.

Tangerines started the proceedings at Furnace, playing the dreaded opening slot. The London band brought their up-dated Dylanesque sound to Liverpool, drawing plenty of applause from an appreciative audience. 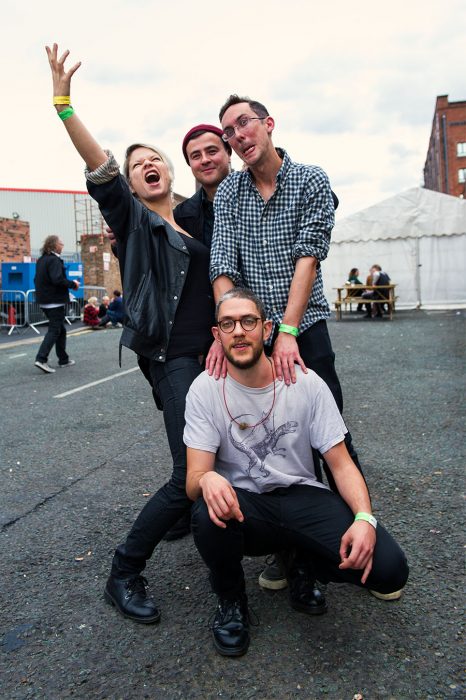 Taman Shud’s frantic, other-worldly wall of sound enthralled the crowd at The Blade Factory. With a second album due for release at the end of the week, the London psych-punks were a highlight of the festival.

Furnace saw a set from Guadalupe Plata. The surf had a skiffle beat at times and featured fine slide guitar; a beautiful, echoing sound.

Booking bands from all sections of the psychedelic genre helped to keep the Liverpool festival experience fresh. Ulrika Spacek were the indie side of ambient, whilst Methyl Ethyl performed a set of dream-like songs. Tau were tribal in the extreme with heavy drum beats and spacey electronica. At Furnace, the soft sixties music played by Ultimate Painting had the feel of The Eagles, but seemed more melancholy.

La Hell Gang seemed more 70s than 60s influenced with meaty drums and echoing guitars. They were followed by the mellow ambient feel of Pure Phase Ensemble 4 featuring Mark Gardner. This was a highlight of the festival for many, and the piece’s only performance in the UK. Wirral band Pure Joy were one of the acts taking the stage before a capacity crowd at District. Other bands on the line-up included Desert Mountain Tribe, Plank and Spectres.

Outside the street scene was full of people connecting; the seating areas round the bar and eateries full of conversation. The atmosphere of the festival was one of expectancy and the willingness to experiment. Every venue on the site enjoyed a crowd even for the earliest acts of the day. Some venues, especially District and The Blade Factory, were filled to capacity a lot of the time, which must have been gratifying for the bands.

As the evening progressed, the quality of the music never faltered. Eagulls gave their fans doomy guitars and tortured vocals in a set full of atmosphere; fast, frantic and vital.  Harald Grosskopf gave an astonishing electronic set with outstanding visuals from the Furnace stage. 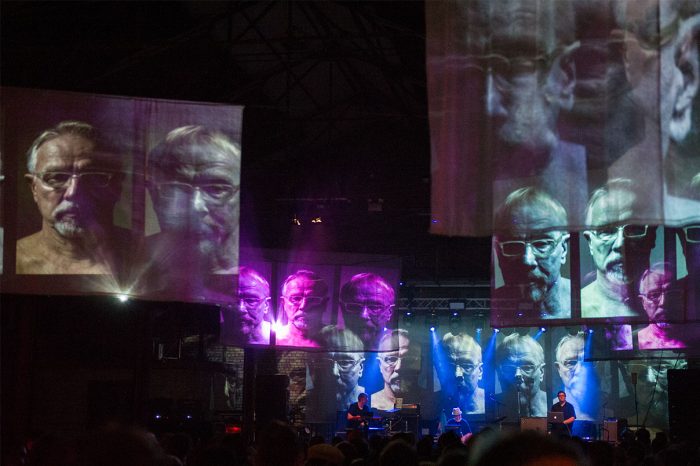 The tempo changed completely with the swagger, bravado and sheer showmanship of Lias Saoudi, aka Johnny Rockets, front man of The Moonlandingz. If the festival had become a little predictable, the opening statement from Adrian Flannagan, ‘A square peg in the arsehole of psychedelia’, should have been a warning for those of a delicate nature. On the stage and in the audience, the band gave a wild, full-on performance and the crowd went crazy. The stand-out performance of the weekend.

The Horrors might have had a tough act to follow, but they did it well, bringing their usual cool to the stage augmented by a stunning light show. The band gave the audience a fitting end to a brilliant line-up of bands on the Furnace stage.

The audience treated to an amazing set by Acid Mothers Temple, followed by great sets by The Wytches and Cave of Antimatter, with mind-blowing digital visions to match the stunning music.

With amazing sound and visual experiences flowing long into the night, Liverpool International Festival of Psychedelia lived up to its reputation as one of the highlights of the psychedelic festival calendar. Gaining strength and prestige from year to year, 2016 has proved to be another successful and memorable event.

You can find updates on the festival here.

Photos and words by Melanie Smith. More work by Mel on Louder Than War can be found at her author’s archive. You can find her on Facebook andTwitter. Photography portfolio can be found here and Flickr