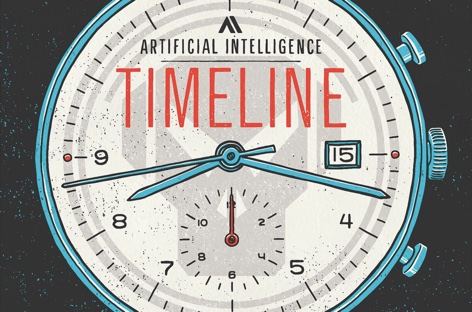 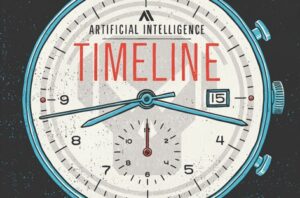 The clue is in the title. A.I’s second album, Timeline soaks into its being and distills the entire birth and evolution of electronica into one thrilling, enthralling, terrifying and joyous long player. The press release mentions early Jungle and Chicago House as influences and these are most certainly there, but instead of a retread, the duo have made a giant leap forward not just in the genre of D ‘n’ B but in the album format as a whole.

Constructed like albums you would normally associate with other genres (rock, soul etc) Timeline seduces you and gently places you at its center with the live drum riffing and symphonic opener Time Out which incorporates static and hiss that would normally expect to hear on albums by the likes of Tim Hecker or William Basinski. Vocal sample and sporadic piano stabs create a sense of the credits rolling before the technology takes over and we glitch, twist and thump into the main body of the track. Time Out is an understated opener and is there to generate atmosphere and thought before we enter the main act.

We are then sent floating down stream with the soulful Aroma, another delicate track that is a roller, washing gentle waves of endorphin’s up and down the spine. A blissful track and one destined to play out to many a crowd of party people enjoying seeing in the early dawn.

Fallen, which features Dawn Wall at first seems like we are sticking to the same laid back narrative but underneath ghosts are appearing in the shadows. An added grit is emerging. Synth lines elongate and morph and it is hear that we get the first taste of the original Jungle sound, skittering away underneath.

Now we are heading deeper into the tunnel, and further away from home as Pass The Buck (featuring DRS) really twists the spine. Deep, omnipresent bass drums surround your ears hitting and pulsing magically. Never once does Pass The Buck fall into the trap of being hard for hard’s sake. It is a thoroughly well constructed slammer that never lets the desire to hit hard smother the intricacies and nuances of the song itself.

Nothing But then at first seems to return us to a calmer tide but again, like so much of what happens on this album, there is a darker force lying underneath. The sub wobble and smother here is a warm but disconcerting effect, deep and troubling.

So far, Timeline has revealed itself to be a soulful and atmospheric listen but nothing really prepares you for its next trick, the one-two yin and yang of The Source and Take Me There. The former is fully formed plunge into the darkest corners of early Jungle full of whip/crack/smash rhythms and grinding rolls. A hymn to the darker side of the genre, The Source is a magnificent middle-of-the-set smash and grab, a heads down/hood up moment when it is time to investigate your inner mind and let it take you down into the well. Take Me There, which features the vocal styling of Steo is the complete opposite. It is the light to the Source’s shade and it is the finest moment on the entire record.

Take Me There puts you into a warm, swaying motion with honey vocals and whilst the lyrical content might be one of pleading and of a desire to not let your loved away drift away from you on the choppy seas of modern life, the instrumental is pure euphoria not once displaying a second of forced emotion or a “let’s get ’em putting their hands in the air” obviousness. Anyone who has found community on a dancefloor or has been in the middle of the crowd with nothing but friends and loved ones around them will instantly get this song and gravitate towards its intentions. Take Me There will work at 1am in a busy club or at 5am in a house party when its just you and those you care about around you feeling that right there at that moment all is well with the world and you just don’t want the moment to end.

Rizon and Is This Real return us to a more playful, smooth, and jazzy place with the latter in particular giving you plenty of chance to move and sway over honeyed vocals and precise piano motifs.

You’d think the duo would now be happy to let the album drift to its conclusion but no there are further jolts afoot as Privilege (featuring Sense) kicks you in the head with a clinical, synthetic tone. The bass on Privilege is almost secondary as it is only there to let the duo do whatever it is they do that makes a sound like no other. At times Privilege sounds like it is playing to you from inside an empty barrel or from behind a door on a disused garage. Utterly urban yet also extraterrestrial, Privilege is the sound of a dystopian future which doesn’t seem that far away, in fact we arrive there on Carcosa.

Carcosa is grimy, dirty, clattering and just plain brutal. The bass stretches and churns whilst the hi-hat and snare grate and hit with clarity and clout. A queasy listen that upsets the internal organs, Carcosa is grim…but utterly magnificent.

Untitled Ghost and Heaven Sent then complete the album and it most certainly does not go gentle into that night as we return in atmospherics to the birth of Jungle where time seemed to snap and knot. Notes stretch out just longer than they should and everything feels off-kilter and perplexing whilst the breakbeat rides eternal.

Timeline is destined to go down as a classic. By ingesting the past, Artificial Intelligence have created a new future, one that allows for darkness and light to coexist in the space on a long player. It will be enjoyed in clubs, houses, and fields, but its true magic is when it is heard via headphones in a darkened room so do just that, turn off your phone, turn off the lights, get settled in and let AI take you to places you never knew existed.