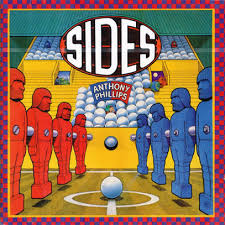 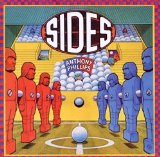 I think it’s fair to say that many musicians of a certain age, having begun their careers in a previous decade that now looked like different world, didn’t know quite what to do with themselves by the time 1979 arrived. There were a few options available. They could ignore what was going on outside, safe in the knowledge that your fan-base wouldn’t suddenly desert you: after all when you were still shifting a fair number of records what did a slagging from Julie Burchill actually mean? It was just so much fish and chips wrapping paper. Another path would be “I can have a go at this new-fangled Punk stuff”, witness John Du Cann’s (ex-Atomic Rooster) great but daft Status-Quo–as-Punks “The World’s Not Big Enough” album.

Anthony Phillips who had left Genesis after the first 2 records, was in a similar quandary and “Sides” demonstrates his position perfectly. In the main he went straight for the same pop root that was propelling the Beatles-obsessed Jeff Lynne towards superstardom and even left room for the Alan Parsons Project to get a few moments of fleeting fame amongst the new wave.

In fact Phillips goes one better than Lynne in the fact that he edges closer to the coming electropop rather than looking back to Sergeant Pepper – some of what is offered here sounds a little like the Motors last LP “Tenement Steps” and treads the line between the Korgis, Robert Palmer’s go at being Gary Numan’s style in 1980 and his old pal Brian Pern, I mean Peter Gabriel’s more easy listening moments.

I’ve got to admit a couple of things made me want to have a look at this record. One, I always root for people who left bands that subsequently went on to great success for some reason, like Pete Best, Mick Finkler (Teardrop Explodes) or Pete Fenton (Banshees), though I don’t know why. Perhaps it’s sticking up for the underdog. The other element was the sleeve – seeing it’s cartoon rendering of a table football game with the players all made up to look like Phillips I thought “well perhaps this is one of those well-meaning but paranoid mediations on war and life in the form of a concept album” that were so popular in this genre. Could be interesting….

Classic Prog thinking, but unfortunately not the case, this is just a disparate collection of songs. For some reason they even got rugby commentator Eddie Waring (cue terrible impressions saying “up and under” a lot) playing table football at the album launch party. Even so this record didn’t make much of a splash in the national charts but is a fondly remembered platter in some circles.

The LP still retains elements of his old band’s fusty stickling for technical ability and “craftsmanship” over anything much to say, but that’s par for the course. It noodles along on occasion and the vocals are shared around a bit (I think it is fair to say Anthony wasn’t a great vocalist). At the time of punk I/you would have hated it, but in the cold hard light of 2016, what harm did it actually do? “Sides” isn’t an unpleasant record and only really drags in a few places and when the Prog moments come along (“Magdalen” and “Nightmare”) they actually sound pretty fresh and not too drawn out.

This release is of course mainly aimed at Genesis completists and fans of the original album and for those people this is as good as it gets and there’s a lot of it! 3CDs and a DVD of remasters, extras and a surround sound DVD (what could be more Prog in 2016?) all in a very attractive clamshell box with plush booklet and poster, so if this is your thing jump in!. For anyone new to this you are going to need to enjoy keyboard led electro pop crossed with the fussiness of Prog and this is a decent example of that.