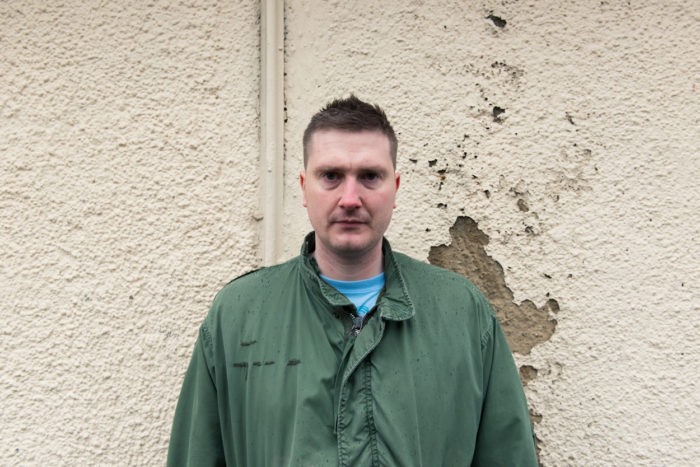 Louder Than War’s Ioan Humphreys gets to listen to an exclusive remix track by Julian Corrie (Franz Ferdinand) from Adam Stafford’s latest album Fire Behind The Curtain on Song, By Toad Records

Scotland’s Adam Stafford released his latest LP Fire Behind The Curtain in early 2018. The album was very well received by all quarters and this week sees the release of a unique remix of one of the tracks off the LP. The Witch Hunt (Miaoux Miaoux Remix) is a treatment of one of the standout tracks by Glaswegian producer and member of Franz Ferdinand Julian Corrie.

When asked about the story of this giddy alliance, this is what Adam said: “Julian and I have been friends since 2009 when I worked as a handkerchief measurer for the Scottish government and we were planning on starting a secret songwriting partnership that had a mysterious beekeeper as its logo, but Julian joined Franz Ferdinand and stopped replying to my emails and voicemail. Luckily, a mutant friend, Shakademon Pliers, convinced the artist formally known as Miaoux Miaoux to remix my nine-minute track The Witch Hunt. Apparently, Julian could only stomach four mins of the song and processed it through the “Banging Witch Ravvvë” filter on his computer. This is the result.”

A statement on the remix was requested from Julian Corrie, however, after several attempts with no reply, a spokesperson for the artist formally known as Miaoux Miaoux issued the following: “Julian wishes to distance himself from any ties that connect him to Adam Stafford and denies any past relationship has ever existed. Julian does, however, confirm his dislike for The Witch Hunt in its original form and the fact that he processed it through a Banging Witch Ravvvë filter.” Okaaaaaaaay………..

Anyway, the track starts with a gentle electronica lead-in that soon develops into a full-on throbbing dance track. It’s unfeasibly catchy and unashamedly euphoric in its structure and timing. Ethereal, almost choral voices break up the throb two thirds in to create a natural breakdown. These soon build up and up to a full-on techno piece that expands on its euphoric start and takes the original to places you would never think possible.

The Witch Hunt (Miaoux Miaoux Remix) is an absolute dance floor banger of a tune that wouldn’t be out of place in Ibiza’s Amnesia or Pacha. It’s a cracking dance tune and belongs on turntables right now. Brilliant stuff.

Fire Behind The Curtain is out now on Song, By Toad  on DL and Vinyl here

Adam can be found via his label and he tweets as @ad_stafford.