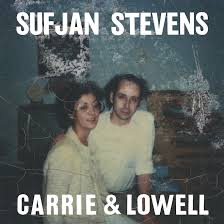 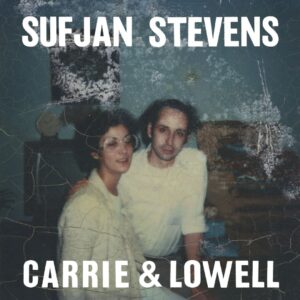 Pieces of art like this are very rare. For an artist of any persuasion to put down something so personal yet universal, recorded so spontaneously but with such depth takes an intuition and bravery not gifted to many.

Carrie is Stevens’ late mother who walked out of the family home when he was one and who died in 2012 after protracted battles with depression and addiction. Lowell is his stepfather who now helps run his record label, Asthmatic Kitty. The songs seek to reconcile Sufjan with Carrie, as if he now feels free to talk. Advance notices used the word ‘bleak’ a lot, and the subject matter would suggest so but the album is anything but. It deals with difficult stuff but with a lightness and sensitivity that uplifts rather than deflates. The childhood  memories he recalls are part of his journey of forgiveness, and there is the sense that he feels blessed to have the spiritual understanding not just to grieve but to take solace in his art and faith as a means of healing. 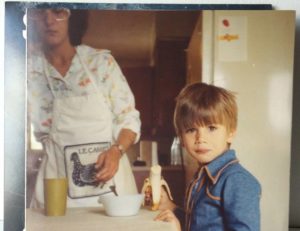 The album was nearly called Oregon and I can see why. Stevens’ project to record an album for every state stalled after Illinois in 2005 but the songs are studded with geographical reference points (Spencer’s Butte, the Tillamook burn) that help anchor the vast cosmological themes.

The instrumentation is sparse, with some tracks recorded on an iPhone. The air conditioning of the hotel room can be heard and his breathing is left unvarnished. The voice is delicate and gossamer-thin and whilst the guitar, banjo and synths easily carry the stark and passionate lyrics there’s no doubt that these songs could handle much bigger arrangements. The depth is accumulated from the weight of honesty and the connection between artist and listener. Listen through headphones in a darkened room and you’ll see what I mean. Noises emerge from the shadows, like a nightmare or a flash of worry.

The title track skips along with Stevens’  multi-tracked vocals innocently recalling parental memories in language loaded with religious symbolism. Like a dark shadow, his thoughts turn to how his mother twisted and then broke his arm, each shard of memory signposted by an ominous discordance and the track plays out with his playful memories seemingly overwhelmed by the feelings of pain and fear.

Carrie & Lowell is seen as a return to the style and substance of Seven Swans (2004). It certainly has more in common with that than The Age Of Adz (2010) on which Stevens developed his love of auto-tune and found some killer dance moves. The euphoric Gateshead Sage show on that tour remains near the top of my personal pile but even when he was surrounded by a maelstrom of effects, balloons and wacky suits he always maintained an aura of peaceful introspection.

On Carrie & Lowell, the themes may have returned to the deeply direct and personal but Should Have Known Better is a bridge between the two albums, five years apart. As the choral female voices and acoustic guitar drop out at 2 min 39, a light electric piano motif begins to move the song joyfully forward. For Stevens the source of gratitude is, of course, God and he’s presented with the vision of his infant niece

“Don’t back down, concentrate on seeing

The breakers in the bar, the neighbour’s greeting

My brother had a daughter

The beauty that she brings, illumination”

Like the epic,  25 minute closer to Adz – Impossible Soul – his faith reminds him of his ability as a  resilient free thinker, tested by grief, to look up at the sky instead of becoming mired in self pity. Despite the challenging imagery, even hardened atheists may appreciate the very human struggle.

If all this seems self-indulgent, it’s not. There’s a playfulness on display that the ‘bleak’ advance reviews failed to notice or just ignored. Eugene is like a childhood postcard with snapshots of nostalgic and bittersweet memories; Fourth Of July is a celebration of an afterlife and the absolute certainty that it exists – “We’re all going to die…”

Capturing the essence of these songs is impossible. They exist in the grey areas that are Stevens’ unarticulated feelings and emotions. The memories evoked are vivid then hazy, the only constant is his unshakeable faith and knowledge that his journey is part of a bigger plan over which he has no control. Enigmatic yet humble.

The emotional catharsis arrives with No Shade In The Shadow Of The Cross when his grief threatens to overwhelm and his faith appears tested like never before. Like an open wound, the imagery is gothic, the picked guitar incongruously delicate, an Easter vision of hell rather than re-birth. “My assassin/ Like Casper the ghost” captures the notion of one of his literary heroes, Flannery O’ Connor, that there is no devil, just God and ourselves.

Given the stage extravaganza that accompanied The Age Of Adz it’ll be interesting to see how Stevens chooses to tour this album and I’ll be at his headlining slot at The End Of The Road Festival in September to witness how he gets these songs across to a partially distracted crowd. Whether he’s the type to worry about this I’m not sure. Out of his pain and doubt he’s made a record of untold depth and universality that reveals more and more as it is played, questioning the listener to journey inwards to discover the answers.

You can buy Sufjan’s new alnum on Bandcamp: music.sufjan.com.  He also has a Tumblr: sufjan.com.

All words by Steve Swift. Find his Louder Than War archive here, and on Twitter.