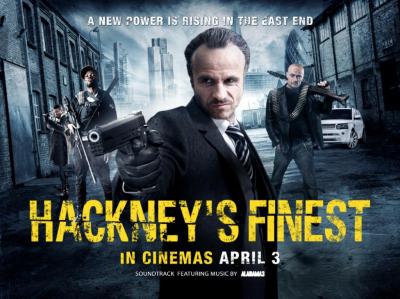 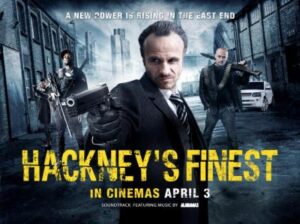 The launch night for just release UK crime caper film Hackney’s Finest was a fitting event for a film that is a well produced and smartly funny twist on the gangster genre. Hackneys Finest is a UK production that is full of the speed thrills and car chase violence of a Hollywood blockbuster but with the dark and cynical sarcasm and humour of the UK dripping from it’s twisting and turning plot.

Inspired by the heroin scene in Hackney in the late 1990s and early 2000s, Hackney’s Finest is an irreverent and darkly comic tale of greed, corruption and survival, told with a wink and a knowing smile. It is the first feature from writer Thorin Seex and director Chris Bouchard (The Hunt For Gollum – the phenomenally successful viral short film), and is produced in association with Framestore – the Academy award-winning digital studio behind Alfonso Cuaron’s Gravity.

It also comes with a great soundtrack and some of the band were on show at the launch event with headlining and the Cassettes reforming specially for the party. the Oldham band whose history is entwined with Twisted Wheel have assailer splintered guitar approach to their short shape shock songs that have the timeless sound of the streets to them and they had the sold out crowd in the palm of their hands and should seriously think about continuing after this great comeback.

Mancunian band “Chris Wise & The Hidden Revolution,” played a slick and atmospheric set that sounded like an established band out on their gold album lap of honour whilst the charismatic London boy Jimi Raine dealt a superior British rock n roll that somehow encompassed the Clash and the Stereophonics in its timeless leather jacket against the world appeal whilst Liverpool band the Collectors Club mashed a new disco to their indie shivers and had a set stuffed great pop tunes.

A great night of music to match a great new film.