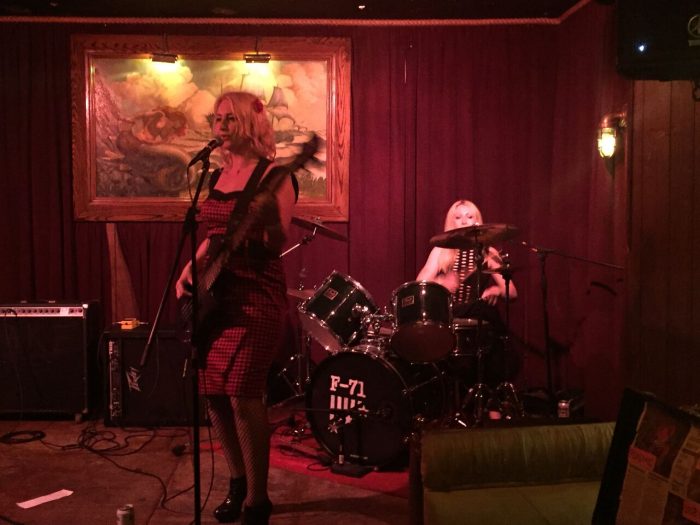 With the fug of testosterone hanging over rock like a smog of polluted city air, You Want Fox are striking out as an empowering duo, strong women, moulding the mammoth riffs of Royal Blood with sweet pop harmonies of the Kenickie, Lush and Shampoo ilk.
I caught up with them, first of all, the week before International Women’s Day, and just before I dialled, their ace new video for incoming single Liar, Liar went live. A Pop-Art silhouetted treatment with bright colours and contrasting black with the rumbling riff and pounding drums over the top.
It’s the first release for the Nottingham twosome since they signed for Derby indie label Reckless, Yes. Not notoriously happy bedfellows, the two East Midland cities don’t normally share too many fond memories and not least when it comes to the heated football rivalries – there is seldom any love lost.
Reckless, Yes, however, are slowly building an enviable stable of talent. Derby is a hubbub of brilliant bands, amazing venues, great bars and a community spirit that thrives off the music scene as far as helping local bands record, creating a haven, an oasis, attracting the crème de la crème.
On top of Unqualified Nurse Band’s debut album, singles by Bivouac, LIINES and then the brand new album from Pet Crow, You Want Fox have entered the coup and are ruffling some feathers.
They released their debut album, You Can’t Sit With Us, in 2016 to critical acclaim from the likes of Kerrang and WhatsOn and are in the process of recording the follow up.

“Album Number Two is half recorded and almost all written, we just need two more tracks and then we’ll be booking more studio time. It’s so exciting” They said. 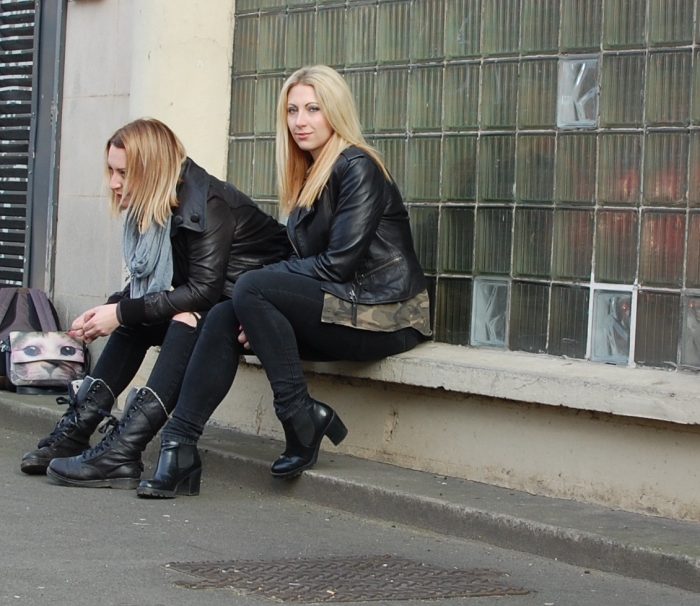 Exciting is the word. Overnight after their video for Liar, Liar went live on YouTube, over 4000 people had viewed it, they’ve been on the John Kennedy show on Radio X, on BBC Introducing, radio stations from the U.S to Hong Kong and have just had a whirlwind few months playing on the West Coast of the States and a show for the Dot to Dot festival. They jet off for dates in the Netherlands shortly, but I caught up with them again in-between to see how it’s all been going since the singles release.
You Want Fox said: “It’s been incredible. Amongst all the radio play and the reaction to the video, one of the best things has been that I heard it being played at Rock City in Nottingham, the place where I discovered so much new music growing up.
“As much as we’d love to believe the contrary, there is a dearth in all female fronted bands. It’s a conversation we shouldn’t be having, there shouldn’t be an issue, but the reality is, for whatever reason, they are still in the minority. You Want Fox should be the inspiration for the teenage girls discovering that now you don’t have to be Little Mix, you can be Haim. You don’t just have to sing sickly sweet chart pop, you can pick up the guitar, the bass and the drum sticks and make a beautiful racket.”
Originally coming from the punk scene, Natalie and Colette are straddling a number of genres, pop isn’t off the table, neither is punk, but they merge hard rock and grunge with sweet melodies like few else can manage, and it seems to come so naturally.
“We’re really embracing the pop, grunge, rock sound we discovered when writing the last album. We’re so much more confident now with our sound – definitely expect a shed load of harmonies on the new record”, they said.

After always being part of a full band, starting out as a duo could have created limitations, smaller sound but instead the contrary happened.

“We never really thought about how it might sound quieter to be honest, we just played along and it sounded so full. We did make an extra effort to learn how to sing and play the instruments as we’d never done that before and it was quite difficult at first, but now we’ve done it for a while and we can do it quite well and use the harmonies, so we don’t actually need more instruments. We looked a lot into how to make our sound big and fat onstage so it didn’t fall flat live with it being just bass and drums. We did a lot of research and had a lot of people giving us advice which was really nice and we honed our sound that way. It took us about a year, but it’s right.”
Much like Royal Blood, with a bass player out front, there is a knack to making yourself sound like the guitar and bass at the same time.
“What I do is I have a split signal into both bass and guitar amps and on the guitar amp I use a Pog pedal or an octave pedal and then I put distortion on the bass amp so it gives it a deep, heavy sound. That’s basically my set up. It took a long time to get there, trial and error.”

With technology what it is today and it’s seemingly never-ending advancement, the sky is the limit. What appears to be stripped back is honed to perfection. The album is nearly there. You Want Fox spent a few weeks in Tenko Studios with Jay Graham, the drummer from Thrash Metal band Ravens Creed.

“It went incredibly well, he brings a whole new dimension to our tracks. We had written a song literally the day before we went into the studio, it’s so punky it’ll knock your socks off. We did the harmonies on the spot just at the playback. It worked out great. We’re really proud of what we have recorded so far.”
Hot footing it almost straight from the studio to the states, they were there to make friends and influence people.

“We met this guy called Johnny who works for Rode Microphones and he got us an endorsement deal. We met the boss and they gave us several microphones to use on the record so they’ll be on the next tracks. We love L.A. The people out there are so lovely.”
The love was clearly reciprocated.

“The crowd’s do not mess around. We played with this awesome band called Wolf The Man and their crowd moshed so much to our set. They certainly know how to ‘bring it’ over there. People were dancing, moshing, drinking, singing and shouting our lyrics back at us. Ace!” 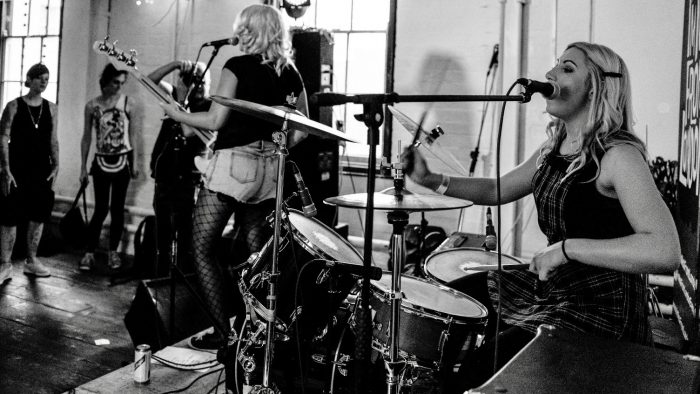 Next up was Dot to Dot Festival back in their home town, where the impact of the singles success was evident.

“It was epic. The room was full, it was a hot and sweaty gig. The crowd knew all the words to all our songs and were dancing and singing away. It made my heart go all funny. The energy in the room was amazing.”
So what’s next? To the Low Countries and the Netherlands and a mini tour with Ink Bomb, a home away from home.

“We have so many friends out there from various bands, it’s hard not to fall in love with the place, and they have a cracking punk scene. It’s only 45 minutes on the plane and it’s cheap so we make our friends come and have a short holiday too.”
You may have seen the posters for the tour floating around social media, incredible ink drawings.

“They’re amazing aren’t they? An artist called Mr Riff does them. We’ve got a load of patches made of the fox, I reckon it’ll be the next logo.”
After the tour in Europe it’s back into the studio.

“We’re trying to find the time to finish writing. We’ve been on a pretty amazing tour in California and playing festivals so time has been sparse. We’re raring to go though and there doesn’t seem to be any writers block for us at the moment so hopefully it’ll be finished soon.”
It’s good to be a Fox!!! 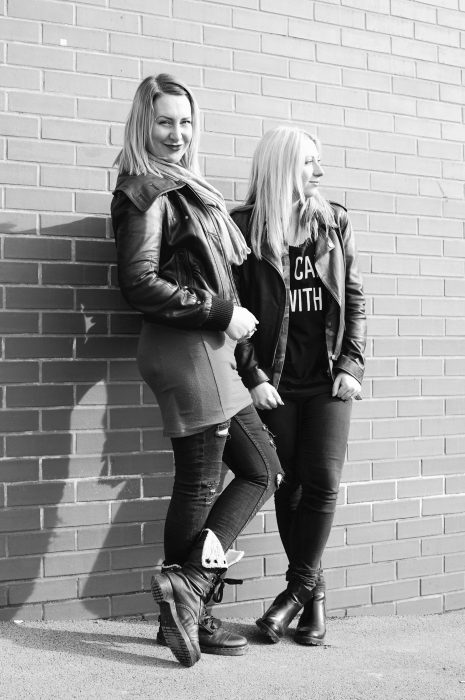