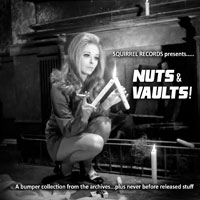 Venerable punk rock and indie label Squirrel is calling it a day after hitting 45 (well, nearly). Glenn Airey hears them go out with a bang-bang.

Squirrel Records, one of the twenty-first century’s most lovable keepers of the independent punk-rock flame, recently decided to shut its doors after fifteen years. A sad occasion, but one that fulfills the Leeds label’s admirable pledge to stop after 45 releases; 33 being deemed not enough and 78 far too many. This dizzying, fifty-track Nuts & Vaults double CD compilation actually represents number 44. Rounding things off later in the year will be a reissue of Pop Threat’s 2003 album Scum, Pop Threat being the first of several bands to feature Darren and Caroline, the Squirrel supremos.

That’s why we like them, you see. Everything Squirrel do (or did) seems to fit. They have (or had) an aesthetic: pop-art iconography put through the punk-rock blender. They have (or had) an ethos: “Caroline and myself would simply approach bands we liked,” explains Darren in the sleeve notes, “and ask if they wanted to put a record out…why the hell do record labels sign bands, and then spend so much time trying to mould them and change them?” To an extent, it could also be true to say that the label has (or had) a sound, although this would be to underplay the breadth and diversity that’s evidenced so impressively on Nuts & Vaults. It’s fairer to say the duo simply displayed good, coherent judgement in the bands they approached.

At the core of Squirrel Records lie The Manhattan Love Suicides and The Blanche Hudson Weekend, which now I come to think of it does sound like a hell of a double feature at your local picture palace. These inter-connected groups both drip with Warhol cool, Mary Chain squall and, most importantly, instantly memorable tunes. Now, those are features they share with some of the other bands in the stable, for sure. Australia’s Sunday Reeds, for example, whose name you might notice bears a couple of clues. Equally, Manhattans off-shoot The Medusa Snare naturally overlap here and there in the Venn diagram of sunglasses, feedback and dog-eared Pebbles LPs.

But immersing yourself in the flood of tracks here as they keep on coming, and coming, is to be reminded that Squirrel have always loved punk rock ‘n’ pop music in myriad forms. They were the first to put out a Cribs record, for one thing, the Wakefield wonders being represented here by long-lost early stunner Fevers and Seizures. The Cribs-connected Kavolchy appear no less than five times, their breathtaking riot-grrrl assault deserving nothing less. I’m also much taken with The Insect Guide and their twin helpings of structured, dramatic pop. Jen Schande offers two examples of the beautiful light-and-shade songwriting that’s made her such a scene favourite down the years.

The sleeve notes promise us there’s more to come from from Horton Parks, which can only be good news as his driving power-pop provides some of the standout moments even among this abundance of fine fare. Washington’s Savage Lucy are as snotty and scintillating as you might expect the ‘self proclaimed youngest girl punk band on the planet’ to be, with subject matter like Dead Boys Stay Dead and I’m in Love With Jackie Hell doing nothing to dispel your fears/hopes. Further away from the label’s punk heart, but no less engaging, sit the atmospheric, sometimes haunting contributions of Ailsa Craig and Amy Hearn/Matt Robson.

Downdime serve up three slices of melodic scuzz-rock that bleed out into the psychedelic given half a chance, while the truly fantastic Real Losers channel The Damned and the equally fantastic Frenzies lay down sleazy surf sounds worthy of the mighty Oblivians. Talking of classic punk, check Horowitz and their two-fisted, bootboy-glam version of Johnny Thunders‘ One Track Mind.

First among equals however, to my pleasure receptors at least, have to be Girl One and the Grease Guns. This mysterious collective treat us to three choice cuts that typify the band’s detached, futuristic greatness. No names, no photos, no gigs: all we know about Girl One and the GGs is that they know how to apply a synth-pop sheen with aplomb to songs as fierce and explosive as any on the label. Keep an eye out for their compilation CD out soon on Greek electro imprint Undo Records.

Apologies to anyone I’ve missed out, but we don’t want to be here all day. Suffice to say that quality is maintained across the two discs, and this release represents the perfect opportunity to gorge yourself on the output of a label that’s done more than most to keep the excitement and fun of independent music alive. While charming us all in the process. We wish them well.

All words by Glenn Airey. You can read more of Glenn’s writing for Louder Than War here or follow him on Twitter @GlennAirey