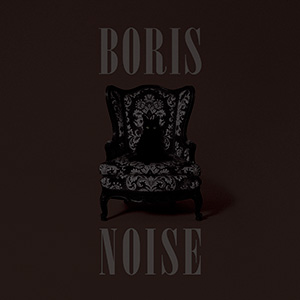 Louder Than War’s Simon Tucker reviews the new album from one of London’s most prolific recording bands, Boris.

Boris are a very difficult band to put labels on. Over the course of their twenty-plus albums, they have explored a myriad of different styles and genres taking in speedcore, shoegaze, doom-metal, and noise (their album with Merzbow is a definite must for fans of the noise genre). It is refreshing to see a band plough on in such insular fashion, not following the money and doing what feels artistically right for them. However, Noise tries to include every genre that the band have explored over the years into one neat package and, unfortunately, this is what lets the album down.

Over the course of its eight songs we are treated to nearly every guitar-based genre there is but this only leads to a diluting feel to the whole piece. On the accompanying press release the band state “If we had to suggest just one album for those unfamiliar with BORIS’ music, we will pick this for sure.” but this does a music fan a slight disservice. Discovering a band you like then exploring its back catalogue is one of the great joys of music fandom. This is especially true when a band are so progressive and restless as Boris. By trying to place every genre they have ever immersed themselves in, the band have created an album that doesn’t feel organic or cohesive enough. That is not to say the album is a bad one, far from it. There are some great moments on Noise, whether it be the riff/counter-riffs on Vanilla, the slower almost waltz-like Ghosts of Romance (especially the magical change in mood halfway through), the last two minutes of Noise’s eighteen-minute centrepiece Angel, or even the gleeful scream-thrash of Quicksilver, but all together these moments are brief and fleeting. Also, there are a bit too many sections on the album where we slip into Linkin Park-type rock which waters down the slabs of noise.

All in all, Noise is a good album but one that lacks a cohesive identity making it one that may not hold up to repeated listens. It will, however, be incredible live (anyone who’s seen Boris  will attest to their power) so if you get a chance, go see them as I feel in the live setting is where these songs will truly shine.

All words are Simon Tucker’s. More work by Simon can be found in his Author Archive.