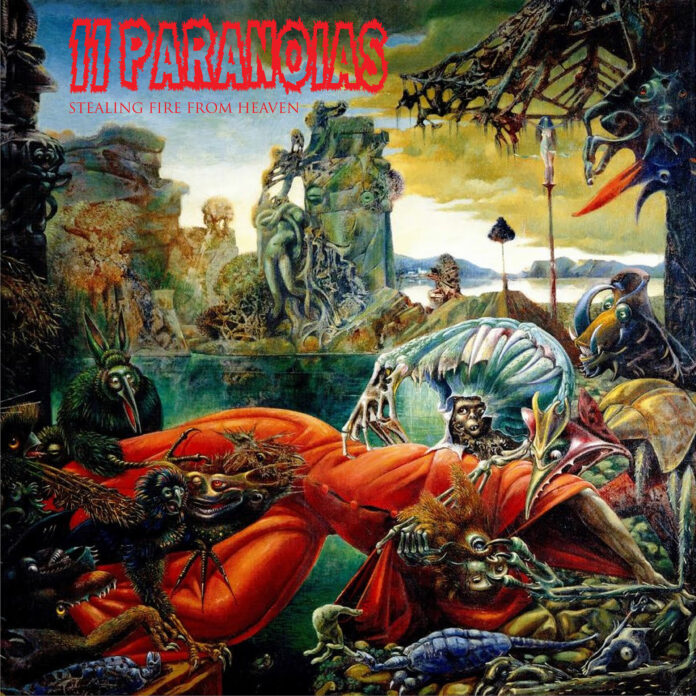 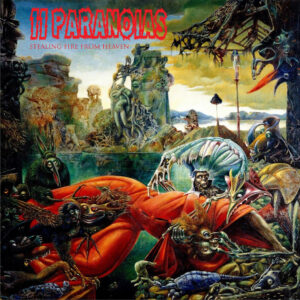 Doom metal outfit 11Paranoias never make good on the potential offered up by early tracks on this, their latest release. Louder Than War’s Joshua Hart reviews.

When I heard the name “11PARANOIAS” I assumed that this album, because of the all caps PARANOIA and the arbitrary number, would be ignorantly heavy nu-metal a la Coal Chamber or Korn. For a brief moment I thought we were returning to the hallowed days of JNCO jeans, frosted tips, and Mighty Morphing Power Rangers. Unfortunately, even the regurgitation of 90’s steeze is preferable to what I got, which is a lukewarm, boring attempt at psychedelic-inflected doom metal by a trio of musicians that never go far enough to embrace their obvious potential, instead resting on the same repetitive riffs over and over and over again until I nearly fell asleep.

The album, called Stealing Fire From Heaven, actually starts off quite well. The Great Somanbulist is a bass-led, malicious, slinky jam that is Lovecraftian in its innate evil vibe, an effect achieved partially through fuzzy, whispering vocals. The middle-eastern influence is palpable, with Sitars and hand drums layered deep in the mix.

Alas, it’s all down hill from there. Paranoitude (Beyond The Grave), the first real track, begins with a bass groove and sparse drumming. After a few moments the guitars kick in and, surprisingly, they actually border on drone-doom, a style that doesn’t fit the bands vhs/satan n’ leather vibe. It’s just too slow, and it ruins any kitschy appeal the song might have.It’s like the music comes from a slow, depressive, quasi-ambient place but their aesthetic comes from something much harder. It doesn’t fit. Underneath this wall of guitars are little keyboard and sitar flourishes, which actually sound quite good.

The vocals on this track are baffling to me. Adam Richardson, on bass and vocals, sounds like he’s falling off of a cliff, enunciating with lots of extended oooooooooooooooohs and aaaaaaaaaaaaaaaahs. I can picture him now, all decked out in a demin jacket covered in candlemass patches, chasing a roadrunner through the desert. The roadrunner sidesteps him, causing the metal bro to run himself 0ff of cliff, levitate for a few seconds, hold up a sign saying “oops,” and then falling to the ground in a great cloud of dust.

Normally, I would go on to describe, in detail, some of the other tracks on this album but, honestly, there’s not much of a point. This first song is all you need to hear. All five following tracks sound just the same. They all start with a bass riff and end with feedback and droning. The songs are short for doom metal, about nine minutes, but after awhile they became so monotonous and repetitive that I just tuned out. It’s a shame, because the idea of overtly psychedelic doom metal is really great and 11PARANOIAS have some serious talent and potential. The middle eastern inflected passages are great and the Richardson utilizes his talents on Lost To Smoke and Retribution of Dreams, but it’s not enough to make this a good record. These three are nearly on to something, but it’s fairly apparent that they need to regroup and sort out their sound before pressing on. They’ve got a great album in there, they just need to find it in them to make it.