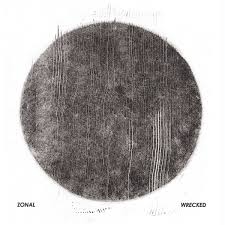 Kevin Martin (The Bug / King Midas Sound) and Justin Broadrick (Godflesh / Jesu) come together once more for the debut album by their Zonal project this time with added Moor Mother. Simon Tucker reviews.

Since Martin and Broadrick peeled off from the band God they were in together and formed Techno Animal the duo have been at the forefront of industrial dub and drone. Techno Animal came and went, their influence cemented forever etched in torn bass speakers and shattered psyches. Martin and Broadrick would continue their idiosyncratic journeys with a myriad of projects but now they’re back. Zonal was birthed a few years ago via live performance and now we get their first recorded statement. Their intent and ambition committed to physical and digital product. They have also enlisted the talents of Afro-futurist poet / producer / artist Camae Ayewa better known as Moor Mother. Working with Ayewa is a perfectly natural fit for the slash and smash experimentation of Broadrick and Martin as she not only shares a sonic heritage with the duo but she has emerged as one of the single most influential voices on alternative culture. Doubt that claim? Go listen to the new Kim Gordon album..the influenced becomes the influencer.  As Moor Mother Ayewa is part of a clutch of female voices who are changing the game, its rules and its future so to have her working with Broadrick and Martin instantly sends anticipation levels up to max. Can it live to such heady hopes?

The answer to that question is an emphatic yes. This is a trio born to work together and over the course of six tracks (the rest of the album is completed with tracks by Broadrick/Martin) we get a visceral thrill that razor cuts through the fridge buzz shit of modern living so you receive its message loud and direct. Ayewa’s politcal poetry gives you chills with its precision and clarity…the music may be warping time and slamming guts but her words are held up centre stage so you get their full intent. Ayewa is unafraid to show you the ugliness of life but look deeper into her words and you will see an artist who has an obvious hope that things can and will change…her reflective mirror gaze showing us underbelly and brutality but it also advises us on how we can change and make that vital difference.

Once we enter the middle part of the album, Ayewa exists stage left to leave us with the full frontal grim static of Broadrick and Martin. This is the point where we must reflect on the sequencing of the album as it would have been understandable if the duo had placed their instrumentals in between tracks by them and Ayewa however by having all the Ayewa collaborations play out first you get a sense of performance from the record. It feels like a live show where a guest vocalist comes on stage, performs their works and then with a wave to the crowd walks off leaving us to enjoy the rest of the show. Do the instrumentals suffer without Ayewa’s vocals? You may think it would but it doesn’t as they feel like completely separate entities that just so happen to live in a shared space.

The instrumentals here are so beautiful in their dark marching hearts. They’re songs to grit your teeth to and march with head held high. Inflections of dubstep on tracks like Black Hole Orbit Zone remind you what an incendiary and thrilling genre it was and is when in the hands of two masters and make no mistake Wrecked is nothing but masterful. Wrecked is an album built for these times. Broadrick and Martin weave their subs together with shards of melody and skyscraper riffs with intricate and surgical skill. Each song contains a thousand elements you can focus on making this album one with longevity and with an inherent gift for attraction. Here is an album you will want to get lost in many times over and it is one that even during its most oppressive moments allows for a space around the edges so you can breathe and remain locked and focused on its main agenda. This is music to get you up and at ’em. Music to storm castles and destroy parliaments. An album with a clear and unifying agenda, which is welcoming without being soft, beautiful in it ugliness and 100% the results of artists at the peak of their powers.

A stunning debut album and hopefully just the start of what could be one of the most exciting catalogues in modern music.