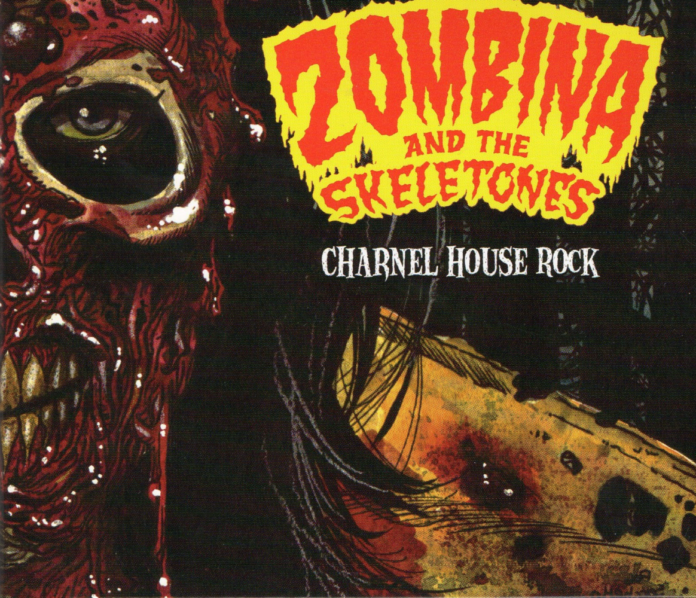 Long awaited follow up to the 2008 released ‘Out Of The Crypt and Into Your Heart’ album, though when your band is comprised of the undead, those in perpetual limbo; time as experienced by the living I guess doesn’t matter…that said they did release the rather wonderful ‘Teenage Caveman Beat Gargantua’ 7” back in 2011, and the included here as bonus tracks the ‘That Doll Just Tried To Kill Me’ EP in 2013 to provide succour for the zombie hoards.

Opening with ‘Tonight, There Will Be No Survivors’ we are hurled headlong into a frantic paced rockabilly roustabout, whooping vocals and chugging bass sax…’The Fear’ is stuffed full of tongue in cheek mortuary humour, Zombina’s lyrical delivery being the most distinctive aspect of the band which is perfectly showcased here; as with other ZATS releases we get treated to an entire raft of genres from doo-wop, 50’s pop, to punk and all points in between; ‘Mortuary Academy’ sees Doc Horror take lead vocal with Zombina harmonising in the background, whilst ‘Walk With Me’ could easily have been lifted from an early Runaways album bar the “everyone’s a mother fucker – motherfucker just like me” vocal refrain; one of numerous stand out tracks ‘How To Make A Monster’ borrows a Cramps title though the comparison ends there – this has even got a swing vibe to it reminiscent of ZATS of old, deep rumbling sax winding its way round the recipe for mayhem lyric.

For me though ‘The Negative Zone’ is the albums strongest track, Zombina coming across all coquettish – its expertly crafted pop, listen carefully and you will discover beneath the sugar soaked harmonies are some gorgeously deviant lyrics; if Charlie Manson had managed Abba then ‘The Negative Zone’ would have been their ‘Voulez Vous’…Zombina salaciously cooing “I got the urge…to destroy again…” A voice so warm, so inviting you find yourself masochistically wishing to be the fateful victim, anyone remember the classic Golden Boy & Miss Kittin track ‘Rippin Kittin’? ‘The Negative Zone’ is the horror pop match…

‘Unspeakable Things’ transports you south to the Día de Muertos celebrations – it can’t be, but is that Th’ Legendary Shack Shakers on the main stage? The lyrics a joust between Doc Horror and Zombina, the Donny & Marie for the Walking Dead generation leading us down a moonlit path into ‘Misery’ a sadistic sax powered lament “I gave you sour milk/but you just spat it out; I chained you to a wall/but you just scream and shout”

‘City Of Ghosts’ may borrow a title from Goldblade, but the stripped back almost 60’s folk inspired vibe takes us in an entirely different direction, a gentle mouth organ succumbing to an almost childlike vocal dripping in syrup complemented by the piano and saxophone; an aching lament to lost community, to lost friendships.

‘Ginferno’€™ comes across as The Adams Family pursued by Dick Dale down Interstate 65, hell for leather guitar licks, deep deep sax powered by Chevy fuelled beats before Mistress Zombina interrupts proceedings with a vocal burst of the Belle Stars ‘The Clapping Song’€™ you know…the “€œMy mama told me if I was goody/That she would buy me a rubber dolly“€ except the dolly in Zombina’€™s world is truly demonic and attempts to bite Mistress Zombina over a rollicking psychobilly beat; Gloriously silly dark humour laced with salacious titbits.

B-Movie humour is the key to The Skeletones; were apparently “all in it together” equally feeling the pain of 5yrs of austerity – what ‘Charnel House Rock’ will do is provide a momentary respite – its escapist, a gorgeous Day-Glo rock ‘n’ roll pantomime, full of sexual innuendo backed with banshee vocals; one of the finest pop records I’ve heard in long time, a kaleidoscope of mayhem mummified in blood spattered bandages – Buy it!

1 Tonight, There Will Be No Survivors
2 The Fear
3 Mortuary Academy
4 Walk With Me [Explicit]
5 How to Make a Monster
6 The Negative Zone
7 Don’t Go Into the Light
8 Unspeakable Things
9 Misery
10 City of Ghosts
Bonus tracks
11 Ginferno
12 That Doll Just Tried To Kill Me
13 Born Without A Head