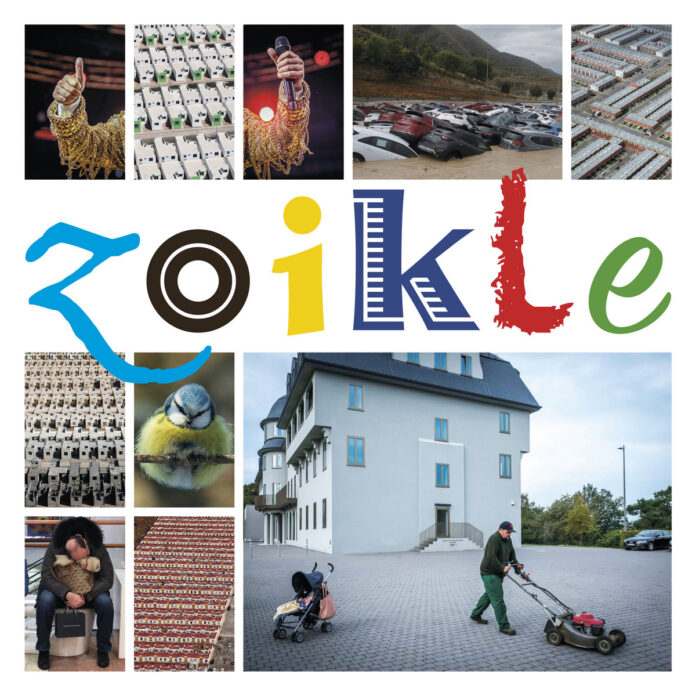 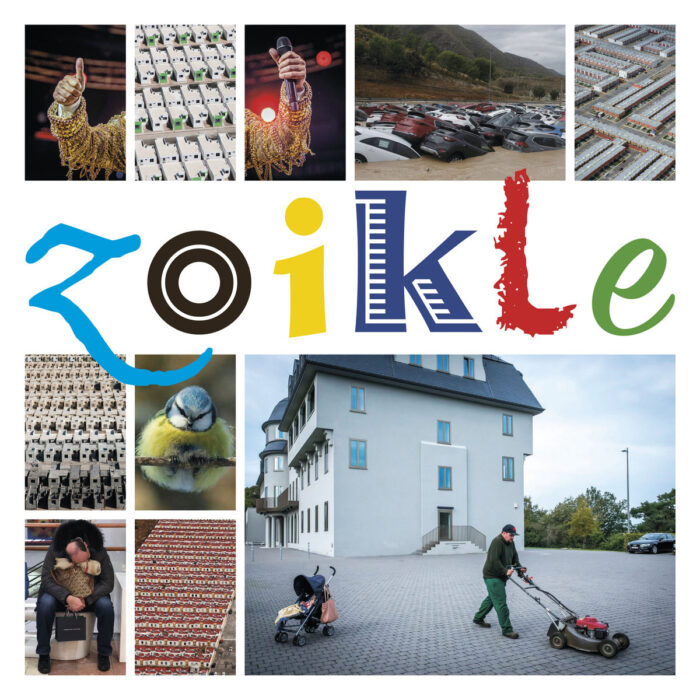 What do we do when we live in an uncertain present? Why, raid our past of course! GW Sok may no longer be the frontman of The Ex but he keeps on rocking in a manner that you shouldn’t ignore. Among other things, he lends his wit and wisdom to King Champion Sounds – the big band rocker project steered by Lancashire Lad in Amsterdam, Ajay Saggar. He’s just brought out Anyway, too; a book of reflections based mainly around choice cuts from The Ex’s back catalogue – one of the most entertaining and informative texts students of the band could wish for.

Sok is by no means a nostalgist, rather someone who, in the best Dutch kraakpand tradition, doesn’t waste things. I would assume that is why he and the others involved with this record have found the time to recently release this, the first full length Zoikle LP, using material which has been lying around for most of the last decade. Other grizzled veterans make up a stellar cast; Lukas Simonis on guitar and Cor Hoogerdijk on drums have laid the groundwork for some tremendous cello playing by a younger gun, Rotterdam’s Nina Hitz, who’s playing really lifts this record to another level.

Other blasts from the past come with the cover, which is typically C20th, with lots of weird visual situations or non-snapshots randomly plastered, willy-nilly, the expectation being that the viewer would be happy to indulge in the same moral joke.

It may be made from the labour of old experienced hands, but contrasting this sound with those made by some newer exponents of the country’s underground scene, it’s noticeable to hear how fresh and uninhibited this record is. Maybe we catch the memory of living in a time where privacy was second nature, or at least not something to be explained and where everything didn’t have to be instantly documented. Whatever it is that “something” has given this record a warmth and character that belies its scratchy, sawing, scribbled sound.

There are echoes of The Ex, of course; mainly in the bouncing beat and a heroic deconstruction by Simonis of that chugging guitar sound which really suits Sok’s delivery. Plenty of sound effects and discombobulated voices float in and out at times, reminding this pair of ears of Bend Sinister-era Fall. No bad thing.

As a wordsmith Sok is able to turn his hand to pretty much any subject, but, like many of the punk generation, is interested in the world at large, even if as a subject to moralise about. Able to turn on a sixpence, his lyrics have at once a pin-sharp and a reflective quality, both of which he can use simultaneously. Barbed attacks come thick and fast. And the sensitive listener will feel as if Sok is holding up a prism and turning it so you see differing points almost simultaneously, allowing the tracks to impart a greater depth than if they were just a set of disaffected rants. ‘Shouting / Moon’ is a great example; being at once a lament for our inability to read the skies and our self enslavement to the latest technologies that come by. And the opener, ‘Sit in the Sun’ is as good and as pertinent as anything you will hear this twelvemonth; Sok’s wordplay able to keep a steady hand on the tiller as the band chop and charge And he’s right, evolution should be fun.

Chamber punk, that’s what it is, a sound that is deeply ingrained in this country, it’s like water slowly shaping the wooden supports on small canals, and still there, practised by the old and the unwashed, even if it’s fallen out of fashion for more placatory sounds and attitudes. If you need a refresher course in why it’s a good idea that you listen in.