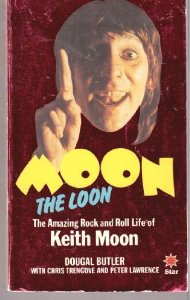 I’m including this mainly because it was the first music book I ever read, and when I was far too young to be reading it too. I was obsessed with The Who from an early age, and I probably started playing drums because of Moon; aside from the bug-eyed, mouth-agape madness I loved how colourful and creative his playing was. Admittedly this book, written by Moonie’s infamous former PA / roadie, doesn’t linger too much over creativity. Anyway, I found it hilarious and rude and also a bit terrifying – something of an education, to say the least. I’d picked it up at a junk shop, it was already falling apart, but I still have it.
For number 3 in Zoe Howe’s top 10 books please go here