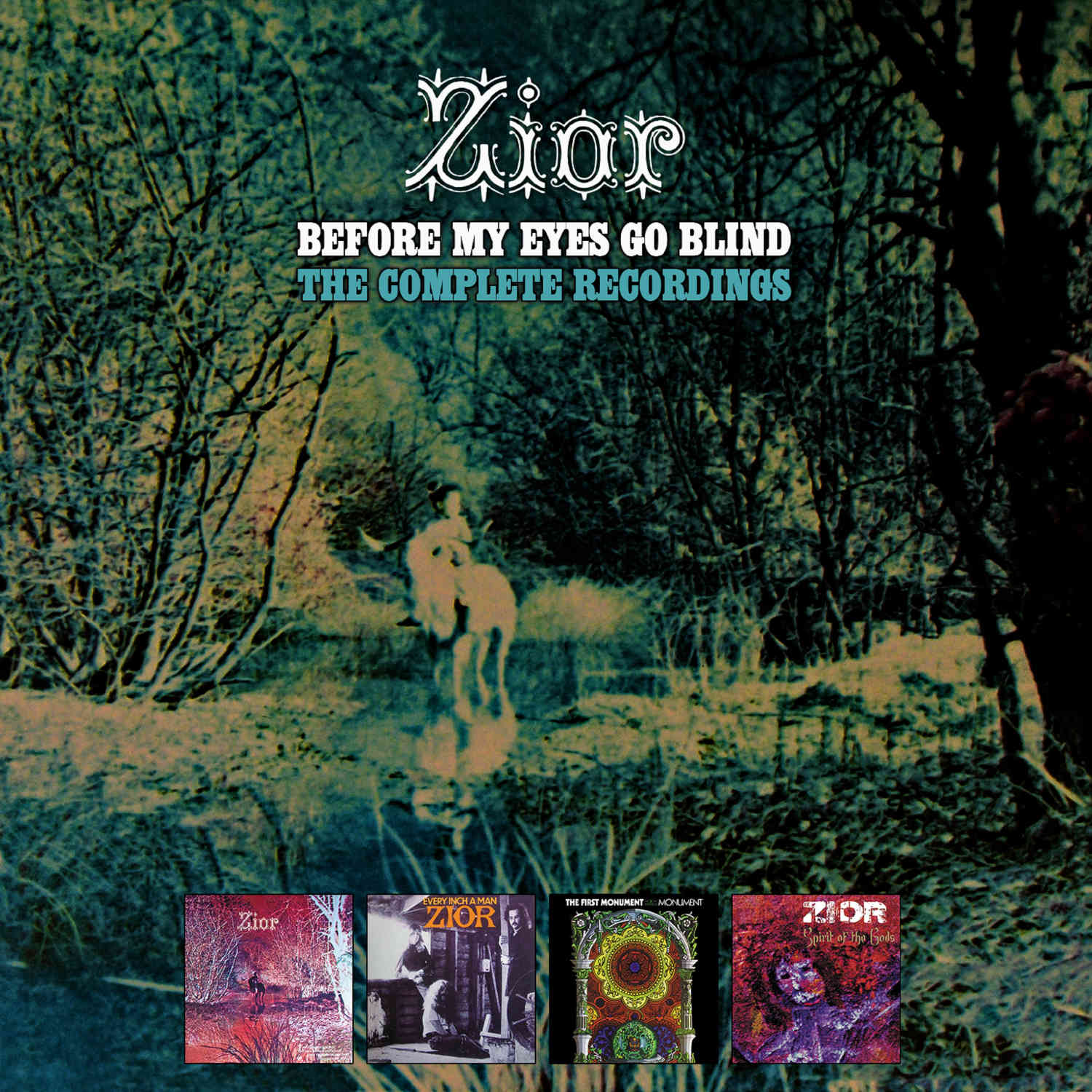 Zior – Before My Eyes Go Blind 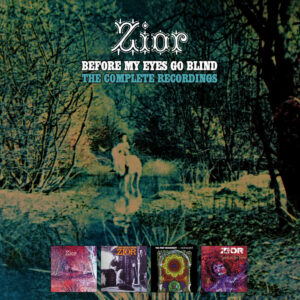 Boxset colleting all the recordings by the Southend based proto-Metal act Zior, including the self-titled debut album, the second LP Every Inch A Man which was only released in Germany, their 2018 comeback Spirit Of The Gods and The First Monument, recorded under the Monument pseudonym…Ian Canty hears some unearthly stirrings near the Kursaal Flyer……….

Zior’s Southend roots meant that they had a few brushes with the Pub Rock scene, part of which was to emerge in the mid-70s from the surrounding area. The band’s leader and songwriter Keith Bonsor played in a band with Dr Feelgood’s John Martin (aka The Big Figure) during the 60s and the first line up of Zior included Vic Collins, later of the Kursaal Flyers. Bonsor and Collins had been part of Cardboard Orchestra, a Psych Pop band who had some involvement with Andrew Lloyd Webber. As the Cardboard folded (ahem…), Bonsor put together a new band with drummer Paul Brewer. Initially retaining Collins, soon adjustments were made with guitarist John Truba and bass player Barry Skells (ex-Bum, yes you read that right) joining Brewer and Bonsor as a four piece Zior.

This new band were to be a much heavier proposition than the Psychedelia whimsy of Cardboard Orchestra. Another thing different about Zior would be that on stage they utilised props, disguises and dramatic interludes straight out of Hammer horror movies, including a pretend sacrifice at the conclusion of their set. A brief appearance in the film Groupie Girl brought them into the orbit of legendary Kinks/Troggs manager Larry Page, who was in the process of launching his own “underground” label Nepentha. Page’s star had waned a bit since his 60s heyday, but he was still a relatively big wheel in the music biz and Zior duly signed to his label in 1971.

A self-titled debut album quickly appeared later that year, where the band were augmented by Alan Eastwood, late of the Exception. Eastwood’s multi-instrumental prowess and strong vocals helped broaden the musical landscape of the band and Zior the album is a good entry-point for newcomers to the band. I bound to say that I found side two of the original vinyl album far more interesting. They did a decent line in out-and-out 70s Hard Rock, but for me they were really onto something on the more spicy efforts.

Having said that, Love’s Desire is probably the pick of the no nonsense Hard Rock/Blues Rock stuff, rock-solid riffing welded to a knockout chorus, it really comes up with the goods. Oh Mariya starts with hymn-like chants, smart jabs of guitar and a creepy spoken vocal and Your Life Will Burn is fast and urgent with some Santana-like soloing, good stuff. The album finishes with the fine and free-wheeling piano rocker Rolling Thunder. They’ve even popped this one in a mini-gatefold sleeve, in order to ape the original issue and bonus track is ace too – She’s A Bad, Bad Woman is in a kicking R&B mode. The LP was lost in the rush of the many other bands doing a similar thing and despite its strengths Zior were reduced to trying to make a crust on the live circuit whilst planning their next move.

After the debut album was released, Bonsor was in a Soho boozer when the owner of Beacon Records asked him to come up with a LP by the end of play the next day, with £300 being the payday if Bonsor and his pals could pull off this feat. He jumped at the chance – even if Zior’s finances had not been cash-strapped it would have been hard to turn down – £300 for one day’s work in the early 1970s was a pretty good whack indeed. So Zior trooped to the TDA Studios in Denmark Street and knocked up The First Monument, which is disc three of this collection, from whatever odds and ends they had going. Because of their status as Nepentha recording artists, the band hid under the Monument name and Bonsor himself took up the phoney moniker Steve Lowe. The accompanying text with the LP played up the band’s supposed connections with witchcraft and voodoo, which is goes without saying were all a work of fiction (as were Monument the band).

Though the lyrics are often risible on The First Movement (probably through necessity), this was another doomy Hard Rockin’ outing for the band, with some weirder stuff to make up the numbers. Considering the speed this went from Pub discussion to recording it’s not at all bad. Typical horror Rock titles like Stale Flesh and Boneyard Bumne mask respectively an effects-laden HM organ frenzy and a BBC Radiophonic Workshop go Metal effort. There are a few makeweights like Overture For Limp Piano In C which is a bit aimless, but they’re made up for by the bracing Dog Man, like Arthur Brown in a bad mood and the cool stop-start of Give Me Life. I’m Coming Back ends things on a high, a superior Blues Rocker.

After this strange interlude, Page put Zior back to work on the follow up to the debut LP, with Cat’s Eyes being released as a single. Despite being a catchy song and close to the then fashionable Glam sound, it failed to capture the public’s imagination. The band worked on tracks for the second album, but by the time it was released in 1973 (and only in Germany for some reason), they had split. Even so Every Inch A Man was a very good record, full of up-tempo stormers and with some subtlety danceable rhythms aboard too.

Evolution has an edgy bass/gritty guitar intro that sets things up nicely to develop into a tough 12 bar rhythm and the title track, though a little camp (not sure if it is intentional or not), is very good with a huge church organ sound. The marauding guitar buzz on fast-paced Strange Kind Of Magic is a winner too. Dudi Judy finds Zior slap bang in the middle of Quo territory, but Angel Of The Highway harnesses an out of control wah wah guitar well and has an effective and atmospheric coda. Every Inch A Man didn’t make an impact in Germany, so that was the end of the line for Zior….well almost.

45 years must be getting on for some kind of record between albums, but against the odds Zior were back in 2018 with Spirit Of The Gods. During the downtime, things had began to move in their favour as both Zior LPs and The First Monument became prized Proto-Metal artefacts for hardcore HM crate-diggers. How did they sound after their extended siesta? Well almost the same as they did back in the 70s. Spirit Of The Gods is a generally successful attempt to reactivate the original Zior ethos. There’s a little more in the way of the atmospheric, spooky mood setters, but some nice powerful out and out rockers too.

The weirdo-synth and black mass effects on Crowman Rises and the Funky touches to Time Is The Reason are particularly pleasing and Entry Of The Devil Voices shows their Horror Heavy Rock abilities unimpaired by the ravages of time. The bonus on this disc is Inner Mind Vision from 1971, which seeks to “bottle the lightning” of their shock horror stage show and partially achieves this objective.

Zior mostly flew under the radar back in the 70s when they were just one among hundreds of Heavy Rock bands, but their theatrical stage show, experimental edge and some good hard rocking tunes meant they were worth more attention than they actually received. You have to hand it to them as they returned from the wilderness in 2018, seemingly unchanged by the years in between. Before My Eyes Go Blind will please Hard Rock nuts, obscurist Prog fans and anyone who up for some spine-tingling, heavy-riffing mayhem.