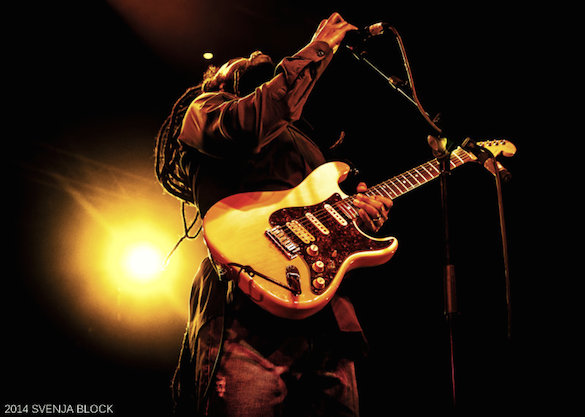 23 April 2014 marked the long awaited day when Ziggy Marley presented Fly Rasta live at The Electric Brixton in London. It was the only UK date and quite unsurprisingly a sold out show. Louder Than War were in the audience. Our review and some great, exclusive, photos follow.

Looking around one couldn’t help but notice that the crowd was a lot less diverse than perhaps some may have assumed or simply stereo-typed beforehand. One of the reasons could be could the odd not so welcoming album review of previous releases which is a real shame. However, everyone is entitled to their own opinion. 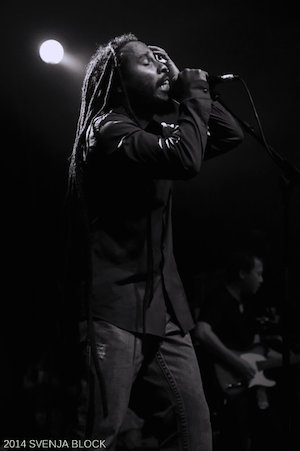 It was elating to have the one and only Ziggy Marley not only in London but in the famous, historical home of urban ‘Brixton’. The main attraction was due to begin at 9 pm but he was running a few minutes late. I overheard someone say ‘Ziggy is some kind of diva init’. Just then the spotlights directed everyone’s gaze towards the centre stage and the man himself, Ziggy Marley, was greeted by rapturous applause! ‘Hello Brixton’ was greeted by shouts of “We love you Ziggy” and just general cheers of merriment filled the air. Almost as legendary as Ziggy Marley was his band the ‘Melody Makers’; in that one moment it seemed like someone had put on the house lights and as what can only be described as “a sea of cameras” immediately started flashing.

When the first chords of the first track Love is Religion started I was inclined to agree that the tone set was one of ‘experimental’, just sitting with it and letting the words wash over you was convincing enough. The few people who didn’t have their phones thrust in the air, were singing along or swaying to the beat of their own drum while being completely lost in the moment.

Ziggy has definitely played with various different sounds like ska, dub, pop, rock to name but a few and I see this as a bold move coming from a reggae artist. But his exploration is probably not just due to the exact location on his personal life journey, but also his many collaborative choices such as U-Roy and the well-known producer Dave Cooley. ‘Watery pop reggae’ was one review I read, but my opinion differs.

‘Storms’ showcased the dance movements of Sharon and Cedella Marley, perfectly timed and in harmony as part of the poly rhythm dance. This was received by both cheers of appreciation and amazement by the audience. ‘Is this Love’ of course originally sung by his father, the late Bob Marley, was undoubtedly the highlight of the evening.

The unanimous consensus was that the presence and / or spirit of the man could be felt. ‘Fly Rasta’, the closing song, showcased the amazing talents of the guitarist Takeshi Akimoto during which a lady in front of me holding up a hand drawn portrait of Ziggy got her recognition, as he looked over in our direction, pointed and smiled. Ziggy Marley will be on tour across the USA between May – August 2014 including various festivals such as the California Roots Festival and Floydfest. 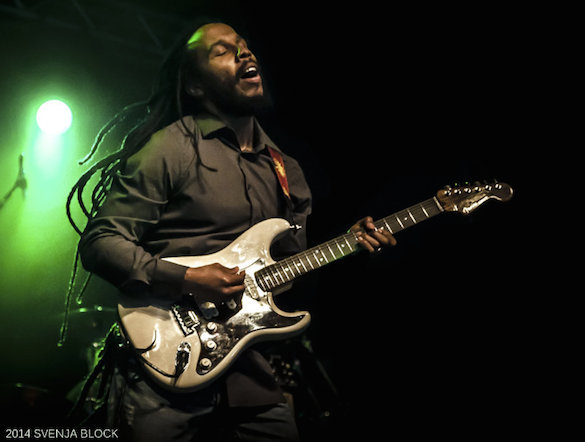 All words by Natasha Grey and all photos © Svenja Block. More of Svenja’s photos can be found at her Flickr or on Facebook.