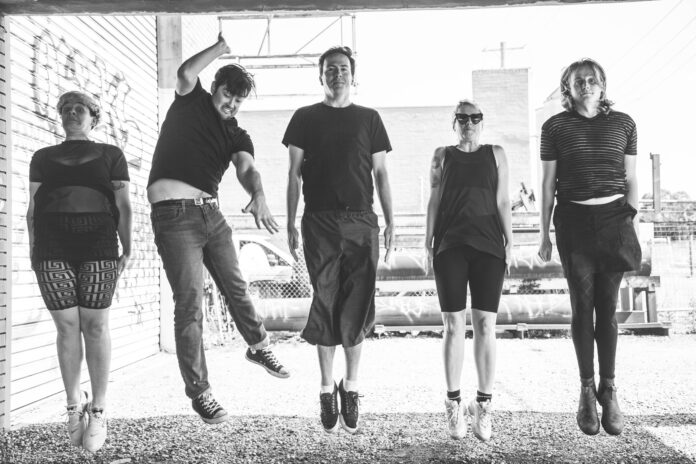 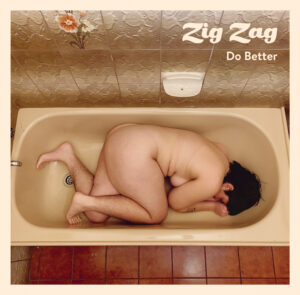 Queer Australian punk collective Zig Zag throw their new single Do Better into the world’s hideous face. A band that is able to enmesh emotions of trauma and ideas of optimism into songs of extreme garage heat and misfit disco cool. Reviewed here by Ryan Walker.

Jesus Christ, it’s fucking awesome and you should listen to me. Zig Zag’s new 7 inch, Do Better, released through Psychic Hysteria on the 9th October, is as tight as all those immoveable interlocking limbs of the outcasts and queers, sharing the same space, on the same frontline, a part of the same sacred circle. 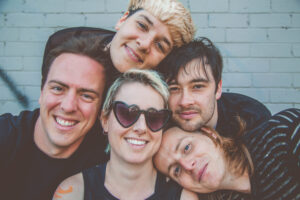 The first song the Melbourne-based five-piece ever wrote, but not the first one they released (Crying All The Way to the Bank), is a continuous kick in the bollocks to the point one’s teeth crumble from the gums. A song for the ascension of the self to levels above the bigots and blinkered trad bastards. A foot in the face of the single mind with the simple view and in doing so successfully unshackle the psychological padlocks firmly attached to one’s core and rejoice in the warmth of the unification of the fragile and fragmented minds, who decisively note the symbolic power of the pronoun and use it to their own ideological, inclusive advantages. An instrument of great intellect wielded well here like the morning star as a sex toy to silence the illiterate dumbo gob.

And what better way to overcome that hellish stretch of one obstacle after another, that laughing landmine of mental health hurdles, than with an onslaught of riotous, electric guitars distort, explode and blister the skin, or via drums which are untamed with one piece of the kit racing against the other, yet succeeding in tightly tying together each adrenalised surge of urgency they simultaneously spin around, spit at and stamp on.

Hot glue bass spills over everything like adhesive leaks and settles into the molds of the song’s bones, whilst singer Kelly Dingeldai’s wild vocals are confrontational and clever, in parts spoken word and smoldering with a feverish poeticism. The next part the dials are firmly digging in the red and one is sliced apart before being thrown into a bath of thrashing black sharks. An adrenalised dynamic that mirrors the subject matter of the tune itself, the angst and the anguish, the beforehand, and the aftermath, which flows forth as a triptych of ‘digestion, a plea, and a rebirthing’. 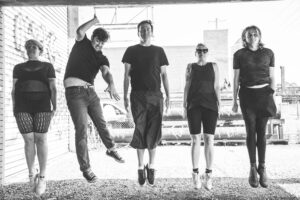 Moodiness ensues with supreme B-side Sorry. As it ‘vacillates between victimhood and responsibility’, it too oscillates with sonic euphoria and wonderful noise, it shakes with shambolic feedback catchiness and erupts with volatile, vital, volcanic energy at the edge of one’s bed, at the pit of one’s stomach. As it boils between being ‘an apology offered and a plea for others’, to feel okay about wearing their/our worn-out hearts on their/our sleeveless shirts and let the ink run, it morphs and emerges marvelously between sassy garage punk, souped-up power pop, and juicy, flamboyant glam trash from the viewpoint of the hungry jungle junkie.

Zig Zag appears to be cutting out their own moral patterns from a piece of fabric we feel familiar wrapped up in as listeners, a combination of different colours that move with their own fantastic groove and fabulous pulse, colours that collide from both sides of the spectrum. In this case, space sweetly shared between the B52s and Bikini Kill, between Devo and the Dead Kennedys, between Minor Threat and Mekons. Tunes for the lost souls lingering on the oblivion’s threshold or simply left behind about to be sucked into the modern void’s grotesque open mouth. An assailment of airtight tunes too fast to really think of as we, torn apart by tough love, butchered by habits of betrayal and acts of apathy in the face of much-needed change, a recognition of the rights of others kicked to the curb and their morals ignored, and blinded by the unrelenting flash of a faraway light, are enraged and damaged, naked and deranged, ensnared and enlightened, by the tragic aches of memory and the choked by the ashes of emotion.

Between forceful new wave neon and frightening post-punk brutality, between a sudden strike of lightning and the conduit firmly rooted in the spines of the cognizant, collective whole where this band plays loud guitars like putting the sword to the throat of the dreadful blob rock giant like an astutely executed tectonic moment in human history.

A message we could all do with absorbing in times of such international degradation and internal decay.

And this band, think clearly.

Listen to Do Better below: