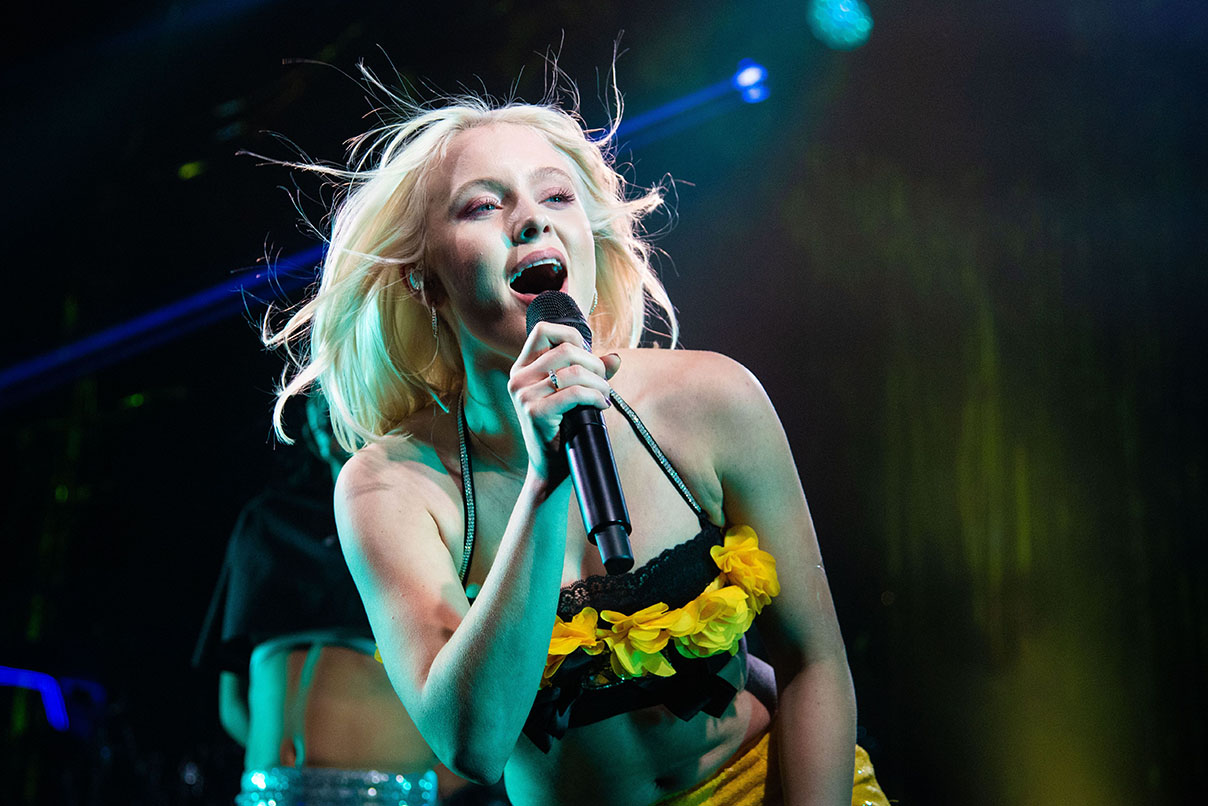 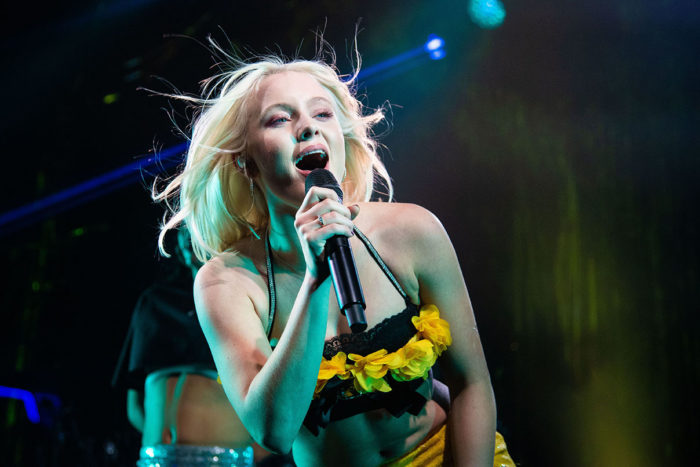 Zara Larsson has come a long way since capturing the hearts of Swedish television viewers when she won the talent show Talang at the age of 10. Now aged 21, and with two successful albums under her belt, the platinum-selling artist is an established force in the Euro pop sphere. The buzz surrounding her forthcoming, presently untitled, third album is escalating after the release of three well-received singles, ‘Ruin My life’, ‘Don’t Worry Bout Me’ and ‘Wow’. Brett Dunford moseyed on down to Brixton and caught a glimpse of this young phenomenon in action.

It’s 8pm and I’m inside the Electric Brixton, where leggy females congregate as far as the eye can see. By 9pm, the venue is a total dad festival! That’s not a complaint, mind you. I’m glad that people of all ages are getting together and showing support for an artist who predominantly appeals to a twentysomething crowd. But a handful were clearly overexcited, judging by the scattered “phwoars” that I heard as supporting act Lennixx took to the stage.

Hanna Larsson (younger sister of the main attraction) and Andrea Kallström sway rhythmically in short black outfits and knee-high boots. For the most part, Lennixx’s music is minimalist pop beats meshed with R&B tones. I connected to their chilled-out harmonies and, if I’m honest, thought they deserved more than the annoying background chatter from those in attendance. The brief set closed with ‘Traded Up’, which I have listened to several times today because I enjoyed it so much. I think I’d like to catch these two again for a full dose when they’re headlining their own show. 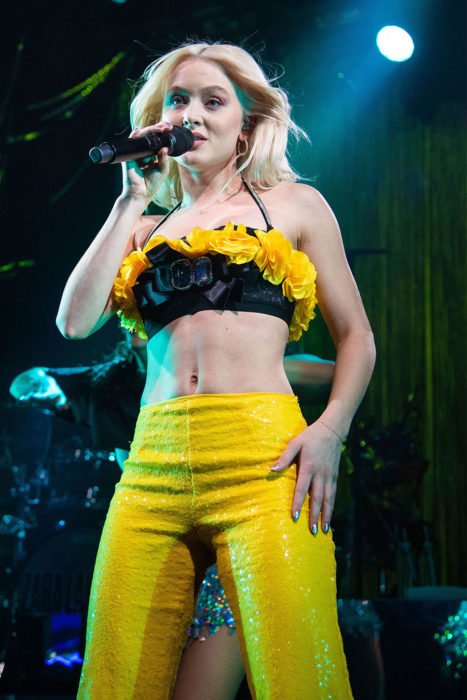 After a lull, the lights go down and cheers erupt as Zara Larsson gets her hour under the spotlight. She twinkles radiantly in gold and glitter, and the crowd devour her presence for the duration. Kicking off with a cover of Clean Bandit’s ‘Symphony’, the bass is so heavy that the building shakes like an earthquake. The anthemic David Guetta collaboration ‘This One’s for You’ soon followed; bringing the house down with it.

Revealing a tattoo she got over here to commemorate her International hit ‘Lush Life’, Zara sweetly states that London is like a second home. As expected, this gesture went down a storm before recent single ‘Don’t Worry Bout Me’ powers up through the applause. This is the turning point when vibes soared stratospherically, and even this ageing Punk Rocker was grooving and contemplating a spell in the pit.

The rousing ‘Don’t Let Me Be Yours’ is next and, my god, her helium voice is so angelic! Let me just put down my pen and pad for a moment, please.

‘So Good’ prepares her legions for another new track called ‘All the Time’, the verses of which pulsate seductively into a catchy dance chorus. All three singles from the new album were performed, and stomping renditions of ‘Ruin My Life’ and ‘Wow’ dropped back-to-back amidst deafening audience participation. The main set closes on epic form to a singalong ‘Lush Life’, accompanied by space rock intro and outro hooks. 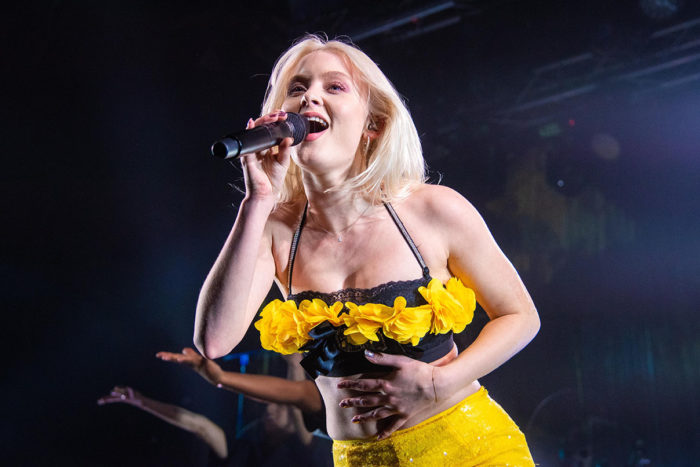 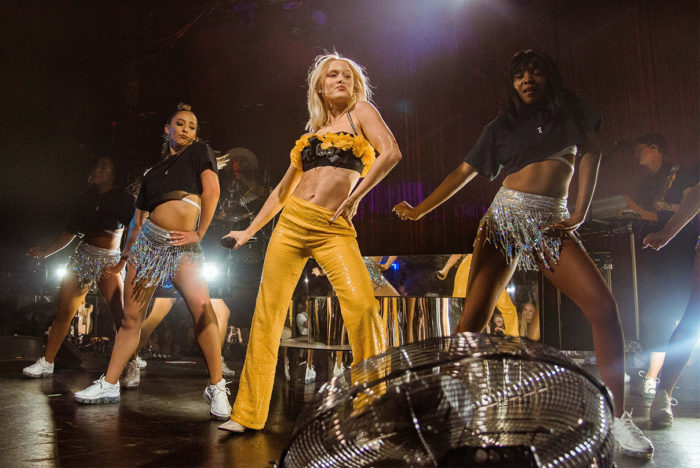 But the fans only have to call her name for thirty seconds until their goddess returns. Launching into ‘Ain’t My Fault’, this was the most memorable part of the evening bar none. I don’t usually attend pop concerts, so to witness a cyclonic scene that I’m rarely exposed to was quite special. As I write notes next to the bar, a very attractive girl dances in front of me, gazes into my eyes, and mouths “want you all in my business, baby I insist…” before slinking off with a flick of her hair. Amused, I glance to my left and there’s a guy going absolutely apeshit; possessed, flailing his arms, leaping around energetically and gripped in the sheer electronic ecstasy of pop. I glance to the right, where five or six young women in mini dresses dance together, eyes closed without paying any attention to the onstage visuals. Even a stern-faced security guard bobs his head while channelling as much professionalism as he could muster.

Then I look ahead to the pit. One word sums the area up: happiness. Men and women, young and old, black, white, gay, straight; arms aloft, singing their hearts out and loving every moment of it. 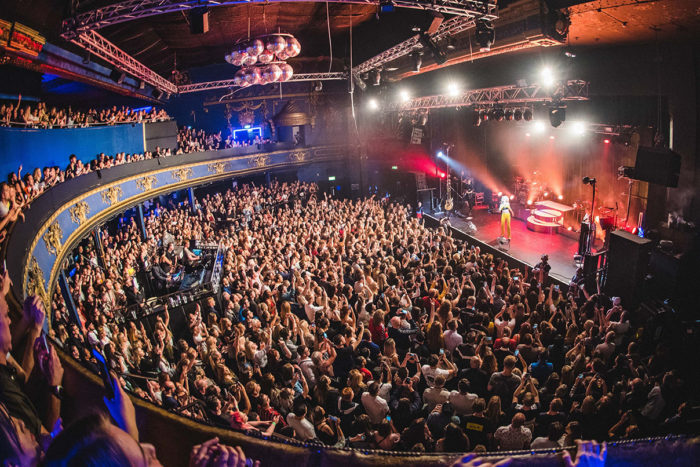 Ending with the appropriate ‘Never Forget You’, I’d say it was a pretty unforgettable night for Zara and her devotees. As I made my way home to the sounds of dance music and smell of weed permeating Brixton’s alleyways, I felt quite positive about getting stuck into this review. And as a music writer, that’s all I can really ask for in a concert.

Ain’t My Fault
Never Forget You

Words by Brett Dunford. You can find more of Brett’s writing on his profile.

Photography by Joe Okpako, you can see more of his work at his website here.