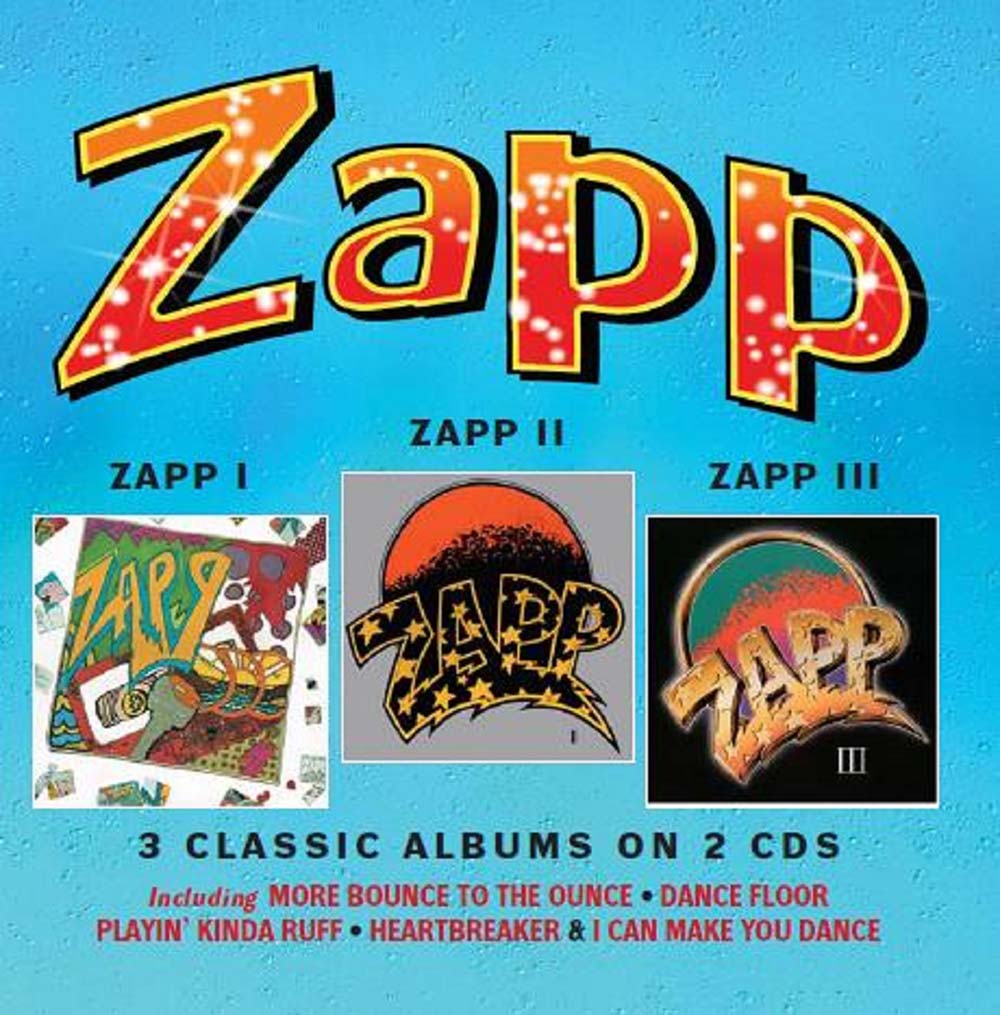 Twofer housing the first three albums by Dayton Ohio 1980s Funk act Zapp, a family band which consisted of the ill-starred Troutman brothers…Ian Canty looks at the frontrunners of the “Future Funk” scene

Despite having a long history in music that dated back into the 60s (band leader Roger Troutman had even issued solo material as far back as the mid-60s), when Zapp arrived on the Funk scene they were as fresh as a daisy, thoroughly modern and up with the changing times. There was nothing old fashioned or dated about them, they seemed on the “cutting edge”. Using a “Talk Box” (otherwise known as a vocoder) they showed up in 1980 with their suggestive, repetitive monster “More Bounce To The Ounce” and were haring up the US R “n” B Charts before you could say Peter Frampton. In the new decade Zapp’s sound was a world away from the 70s street Funk stereotype, snappy, stripped down but hi-tech with their tight, “locked groove” records being “breakbeat” ready on arrival. As a result they became hugely popular in the US during the first years of the 1980s.

Zapp originally came together in 1977 and fell under the aegis of P-Funk mastodons George Clinton and Bootsy Collins, who both played on their debut record, providing support and playing bass guitar respectively. This first self-titled LP is a total blast. Chock full of five lengthy dance masters and the inevitable slow jam ballad “Be Alright”, nothing quite matches the single for suggestive exuberance but they all have a quirky charm, with “Coming Home” perhaps being the pick of the rest. It was a massive success for the band in their home country, clocking up a number 1 on the Black Music chart, plus hitting the Billboard top twenty. Perhaps the album of 80s Funk, “Zapp I” has had a wide ranging influence on much of the Dance Music that followed right up to the present day.

The remainder of the first disc presented here is padded out with various single sides from the three LPs presented here, so they’re a bit out of sequence but I suppose that was the only way you would get a three platters on here and the extras, so that’s ok. As time progressed, more than any radical change the band merely tightened of the mesh so to speak and as a result these later tracks do not sound too out of place.

Two years elapsed before the appearance of “Zapp II” and in that time the band had gently edged further towards the electronic, syncopated sound that their debut had signposted. As the Disco boom subsided this type of classy Techno Funk took over at the clubs and they ruled the “Dance Floor” at this point in time with the gargantuan, 11 minute single of the same name . On this album some great female vocals helped to broaden and indeed humanise the sound when the Talk Box vocals and electronic backing threatened to make them appeared a tad too robotic. Zapp were firmly in their pomp at the time and despite a rather faceless image (I think that it’s fair to say they didn’t have the character of say a Rick James or a Prince in their ranks) they delivered the goods. “Playing Kinda Ruff” caught the mood perfectly; hectoring vocals, a relentless beat, treated horns and an overall message that the free and easy, floppy hatted cliché was now old hat as Funk got to grips with the harsh realities of Reagan’s 1980s USA.

There is the occasional time when it all gets a little gimmicky and Zapp certainly liked to stick to a formula (thought this time round the sort-of ballad “Do You Really Want An Answer” is a peach with some lovely, old-style R’n’B passion), but overall it an enjoyable record and a good follow up to that ground-breaking debut.

Though a perfectly acceptable record in its own right, by the time of “Zapp III” that formula felt a bit tired and as a result this LP was nowhere near as successful as its predecessors. The big ballad on this LP, “Spend My Whole Life” is more or less stripped of the gimmicks and eccentricities that were a large part of Zapp’s appeal and really it’s just an old style Soul love song, but after a whole lot of crashing synth Funk it felt agreeable, like a nice cool breeze. They could still storm a floor-filled dancehall with the likes of the maddeningly catchy, mid-paced “We Need The Buck” but overall it doesn’t match up to the first two sets.

After this setback their popularity did begin to wane in the face of Hip Hop’s onslaught but they did manage to put out two more albums before they split. Sadly the Zapp story had a tragic coda in 1999 after Zapp closed shop when Larry Troutman killed his Roger brother and them himself, seemingly over monetary disputes. To end on a positive note, the remaining brothers did reconvene for 2003′ “Zapp VI: Back By Popular Demand”.

This offering from Robinsongs puts together almost everything you need from Zapp really (with a highly informative sleeve note from Charles Waring), you do need to know about them because they were trailblazers and their best records could still melt a dancefloor from 50 paces even now. Ask the tonnes of people that have sampled the band over the years if you don’t agree, or better still do your lugs a favour and cop a listen yourself.