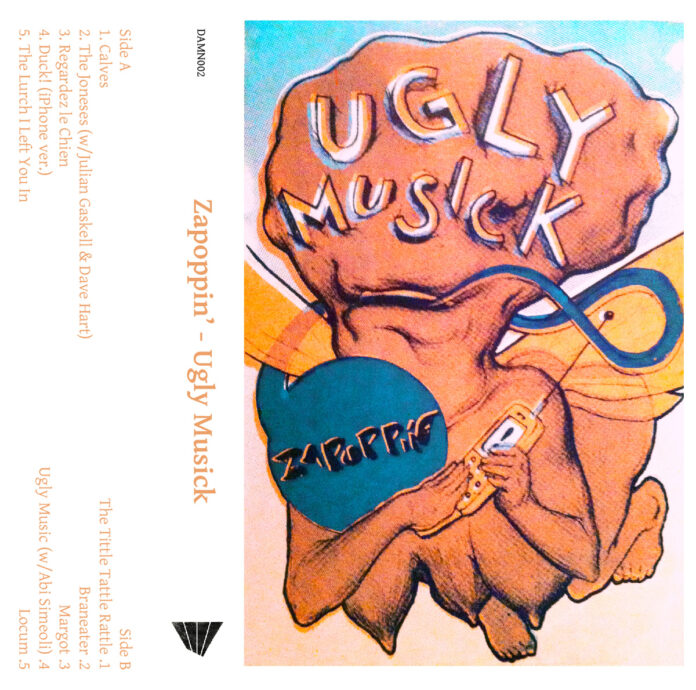 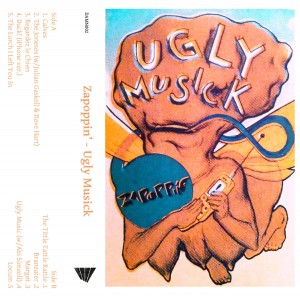 Zapoppin’ mix a surreal blend of folk music and lyrical nonsense that is as hilarious as it is intriguing. Louder Than War’s Craig Johnson has had a chance to listen to their new album Ugly Music and share some thoughts on it.

Zapopppin’ describe themselves as a powerskiffle band. Probably the first time I’ve heard that term, but the more I repeat it, the more it starts to make sense. It’s a very loose, but very fast and energetic offshoot from what is usually branded skiffle. Scratched, throaty vocals yelp over what feel like banjo power chords. The songs sound very raw, one or two takes, maybe recorded live, I don’t know. An unfiltered sound that is further exemplified by the beauty of the cassette format, a soft grubby hiss poured over it. Lyrically, the album lives up to it’s title. This is indeed ugly music. Songs cover topics such as decomposing bodies, pineapple chunks, hangings and bran. The release comes with a lyrcis zine which gives you an insight into the odd behaviour of these gentlemen. I can’t help but raise a smile at the content of these songs.

Self deprecating, both in the press release and title of their records, Zapoppin’ seem to think that no one would want to listen to this music, yet still release it. Sort of reassuring I guess. They must be having enough fun to think it’s worthwhile. On my first listen I found myself turning to the stereo and thinking ‘what the fuck is this?’ Caught my attention I guess. The whole thing is a very tongue in cheek, self aware but ultimately hilarious piece of nonsense folk. Songs go from being a full forced folk spasm to violent screaming to ghostly spoken word. There’s no sitting still here. It’s fidgety, it’s full of caffeine and beer and whisky and it doesn’t want to stop. The cassette tape feels like it about to disintegrate, like there will be one great surge of energy that will evaporate the entire thing.

Musically I wouldn’t really compare it to anything else. The only comparison that springs to mind is a slight resemblance to the half sung/half shouted vocal style of Modest Mouse’s Issac Brock. Other than that, it’s Zapoppin’. Unmistakably. I’m supposed to be rating this out of ten but I’m not going to. I wouldn’t really know whether to give it one or ten. It’s kind of ridiculous and a bit insane, but I quite like it. After each listen I subsequently find myself bemused by it’s raucous charm. Go have a listen, buy the tape and force it upon everyone you love or hate.

You can find Zapoppin’ at the following places: Their website, on Bandcamp and on Soundcloud They’re also on Facebook.

All word by Craig Johnson. More of Craig’s writing for Louder Than War can be found here. You can also find his blog here & follow him on twitter: @craigness.