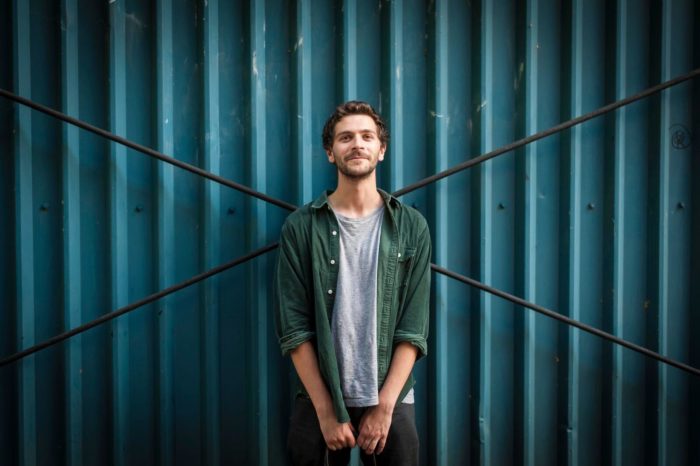 A frequent and much-respected collaborator on the Bristol music scene, you’ll have heard Zander Sharp’s fiddle and his backing vocals on tracks by artists such as Kate Stapley, Langkamer, Jamie Cruickshank and Slonk. Frequently the bridesmaid, rather than the bride, he’s decided that he also looks rather splendid standing centre stage in the big white frock (sort of), with his new single, Settlements, out on Oxford’s Upcycled Sounds – released today, 15th August.

Deviating only slightly from the spurious wedding analogy above, Settlements examines the inevitability of loss as soon as we take the leap of faith that love involves. Love’s the ultimate risky investment, sometimes an inspired bargain, sometimes a mis-sold vehicle that depreciates the minute you drive it off the forecourt. Whatever happens, bitter, sweet or both (like lemon curd) it’s always going to be transient.

Settlements can be gatherings of people and their dwellings. Sounding like Nick Drake channelling Charli XCX on Boom Clap, with a hint of Crash Test Dummies’ Brad Roberts on booming baritone backing vocals (Zander stacking one vocal on top of another in homage to Elliott Smith), he considers how “I’d be strong/ If I never needed someone./ If I didn’t belong/ To these creatures that move in groups.” We are simultaneously our own best friends and worst enemies, constructing an anthropological paradox in which we can be loved and love in return (rather pleasant) but the loss or lack of love can make us precarious, yearning and needy (a bit of a downer).

As if paying homage to the name of the label, Settlements also contains the sonic embellishments of a tapped reel-to-reel tape and of Zander’s own chest-thumping as percussion. The track begins with a plaintive fiddle and vinyl crackles, as if we’re about to hear an old gramophone requiem for a lost Orcadian fisherman. The fiddle also provides the song’s bass, along with other perky pizzicato plucks and many long, sighing breathy notes, often made woozy and disconcerted, having been fiddled with via a tape deck by producer Niko O’Brian. Folk and jazz combine to make the track pensive, yet accepting of loves ups and downs (not that sort).

In Zander’s own words, “Settlements is the first song I wrote on the violin. It came together after a friend of mine died, and I started seeing love as this curious Chinese finger trap between joy and pain that we can’t really avoid.” Settlements is a taste of things to come, with the EP, After You, out in mid-September, and a launch show at Café Kino in Bristol on 23rd September, promoted by Fresh Juice.

Catch Zander Sharp on tour with label mates, Limpet Space Race on tour right now (dates here). Be there or be an equilateral rectangle.